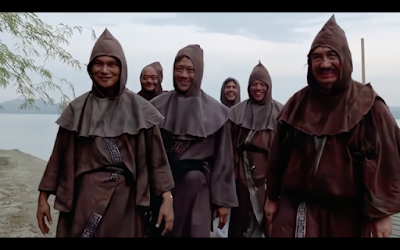 A live action cartoon with boobs!

It was a year ago I decided to write about 52 movies released in 1982. When I started making my list of movies I wanted to cover, there was one movie that caught my attention immediately. I had never heard of it, but Vinegar Syndrome had put out a Blu-ray of it a few years ago, and during their halfway to Black Friday sale in 2021 I purchased Raw Force. This disc has been sitting on my shelf in the plastic for almost a year, waiting patiently for the day to arrive that I would finally unwrap it and push play. It was on my initial list of 10 (that turned into 110 that turned into 52) and I'm happy to announce I didn't hate it. After all this time – the waiting, excitement building, the anticipation reaching unattainable heights – I can say Raw Force is fine. 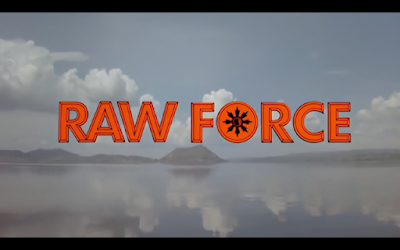 Here we have a group of people traveling in the South China Sea on a rickety steam ship captained by Cameron Mitchell. On board are lots of horny people and a couple martial arts champions. Meanwhile, a sinister-looking man dressed in white and sporting a Hitler mustache kidnaps women and, in return for access to a jade mine, trades them to cannibalistic monks on Warrior Island who believe eating human flesh help them raise the dead of disgraced fighters. Hitler Guy overhears the cruise is headed to Warrior Island and enlists his team of henchmen to stop the ship at any cost before uncovering his diabolical secret. They storm the ship, kill some of the passengers, but ultimately fail their mission. The captain, his cook, the recreation director, and a handful of passengers escape in life rafts after the ship is set on fire, and end up on Warrior Island. Led by the martial arts champions and the cook who is also a fighter, they must now battle Hitler Guy, his henchmen, and the cannibalistic monks. It's as ridiculous as it sounds, and it's pretty fun.

Early on I started having Jason Takes Manhattan fears, where most of the movie was going to take place on the boat with only the last few minutes happening on the island full of cannibalistic monks and zombie warriors. Luckily, my fears weren't realized. I don't need over-explaining in my exploitation movies, but I had no idea why all these people were on the boat in the first place or where they were going. I was eventually distracted enough by all the full frontal nudity and excellent fight choreography, though. The other question that kept nagging me was: Who are all these people on the boat? We have Mitchell as the captain, doing what we want Cameron Mitchell to do; Hope Holiday as our recreation director, Hazel, who apparently hired these martial artists as entertainment (?) and struggles to keep her boobs contained in numerous strapless numbers; the martial artists themselves played by Geoffrey Binney and John Dresden; and a few blondes I couldn't keep straight for the life of me except for Jillian Kesner, who turns out to also be a fighter. But the ship is also chock full of swingers, it seems. At one point Hazel apparently organizes a mixer in one of the cabins on the ship that looks more like a swingers party. Everyone is drinking excessively, assisted by the bartender who smashes giant blocks of ice with his head and then serves the smashed ice directly off shag carpeting; people are attempting to have sex everywhere; and no one seems to be sitting on chairs – their preferred seat is on the floor I guess. 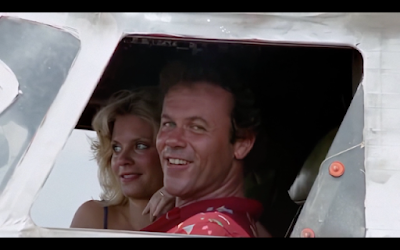 After the raid, our main group escapes on a raft, which left me wondering: where in God's name did the rest of the people on the boat go? Are we to believe Captain Cameron Mitchell abandoned ship, leaving a large portion of his passengers to parish in a fire while stuck in the middle of the ocean? In the raft, before ending up on Warrior Island, the survivors spot Hitler guy flying in a seaplane overhead. To get their attention Mitchell fires his revolver in the air as casually as if he were lazily swatting flies on a warm summer day while lounging in a hammock drinking lemonade. This only shows us why we love Cameron Mitchell, though: we can assume he didn't necessarily want to work, but he had to work (multiple bankruptcies), and while he was phoning it in most of the time in the exploitation half of his career, his presence alone is enough to entertain us. 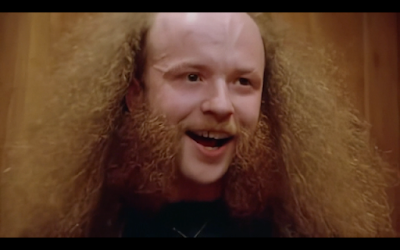 About halfway through the movie, I realized this was an Andy Sidaris movie Andy Sidaris didn't write or direct or produce. Big boobs and big guns. That's why you watch a movie like Malibu Express or Hard Ticket to Hawaii. And that's why you watch Raw Force. The unique thing about Raw Force, though, is that it's a live-action cartoon version of an Andy Sidaris movie. Our villain is mustache-twirling Dick Dastardly (replace long stache with Hitler stache), complete with a human Muttley. When we see the cannibal monks, they're literally basting one of the blondes with palm leaves, preparing to roast her over an open fire a la Bugs Bunny and Witch Hazel. During one of the excellent fight scenes a zombie warrior swings a samurai sword and misses his intended target, instead slicing through a melon. One of our heroes uses a net to stop one of the bad guys for God's sake! And what action-packed, Looney Tunes-style movie would be complete without piranhas? The movie ends with our hero looking directly into the camera and winking followed by the title card, “To be continued...” This is a cartoon, and the more I think about it the more I really enjoyed the movie. It's better than “fine.” It's good!
Posted by Patrick Bromley at 5:00 AM