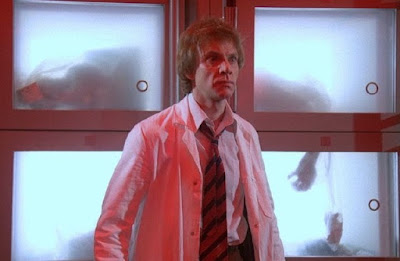 Down with privilege! Smash imperialist rule!

I wish movies depicting class struggle would turn into time portals – history books, if you will – but unfortunately these stories will forever be relevant. From Sergei Einstein's Strike (1925) and The Marx Brothers in Leo McCarey's Duck Soup (1933) to Bong Joon-Ho's Parasite (2019) and Downton Abbey, stories of class struggle and the plight of the 99% will forever speak to our hearts. As the third story in writer David Sherwin's and director Lindsay Anderson's Mick Travis trilogy, Britannia Hospital takes what may seem like the most benign and unrelatable story of [specifically] British class struggle centered around a hospital. Yet it brings us into its world with absurd humor and chaotic energy and doesn't release us from its grip. Ever. Even when the title card appears out of nowhere after two hours and the movie just stops, we have been enveloped and are now trapped like Lisa Blount and the mirror at the end of John Carpenter's Prince of Darkness. 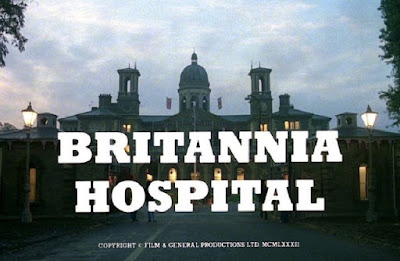 While the only connecting thread between all three Mick Travis films is the name Mick Travis and that he's portrayed by Malcom McDowell (as well as several actors that appear in all three films), each movie depicts revolutions as indictments in different settings throughout British culture. If.... follows Travis as a student enrolled at a private school where he leads a violent uprising of students versus faculty after suffering abuses minor and severe. In O Lucky Man, Travis is a middle-class traveling coffee salesman working hard and doing everything right but never achieving the success he so deserves due to greed of those in positions of power. And in Britannia Hospital, Travis is a reporter sent into the titular medical center to expose the major differences of treatment between wealthy patients and everyone else. All three films carry deadly serious messages wrapped in absurdist humor yet each drives home their central message like a jackhammer.

At first glance, Britannia Hospital seems like a hard sell. “A movie from 1982 about the class struggle of British citizens centered around a hospital,” was my flop of an elevator pitch to my friend. “Mmm,” he replied, “Sounds... riveting,” the sarcasm oozing out of the earpiece of my phone as I was talking with him. The poster and its tagline help. “The M*A*S*H of Socialized Medicine,” in big block letters above a group caricature of the massive cast full of “that guy” British actors. And Mark Hamill. Essentially Britannia Hospital is about an old, established institution with a new, experimental wing that is currently hosting a murderous African dictator in one of the patient suites. Most of the staff has gone on strike due to the fact that the richer patients are given better care and more rights than those less wealthy. On top of this turmoil, the Queen (HRH) is coming to tour the new wing. Mick Travis and his small crew are there as investigative reporters with the goal to expose the social disparities and atrocities taking place at this famed institution. 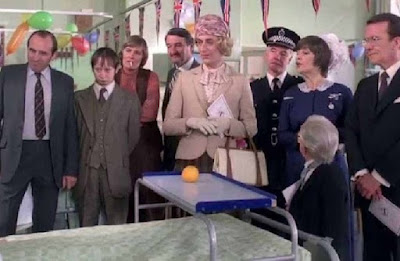 The film opens with an ambulance driving through a small picket line, the picketers stopping the van and inspecting the patient in the back. They let it pass where it deposits a geriatric patient in a quiet yet massive hospital corridor full of beds. The attendants and nurses look at the gurney with it's nearly-dead patient atop, bicker about who's going to care for this invalid, and eventually all disperse, leaving the man on the stretcher to presumably die. We then start to meet the large ensemble cast in roles that include the hospital CEO doing everything he can to keep the remaining staff on board including making false promises, union representatives for the blue collar hospital workers, a crazy doctor in charge of the new hospital wing, the hospital board whose only concern is making HRH's visit a success, and the hordes of protestors that eventually storm the building. Graham Crowden is Professor Millar, the mad doctor in charge of the new wing who says the line, “Today: the human experiment. Tomorrow: Genesis.” It was at that moment that I realized we're dealing with a literal Frankenstein story, and lo and behold, as we enter this brand new, state-of-the-art surgical center, we see a room full of refrigerated units containing body parts and organs. This “Genesis” that Millar is referring to is his very own Monster that, spoilers, is eventually revealed in the third act. But the Frankenstein aspect of the movie is only a single slice of this very large pie that, at first reading of the Kino Lorber Blu-ray synopsis, seems chaotic and convoluted. That it is. But I also think the ludicrous plot points throughout the movie make it a smooth and cohesive story to swallow, even at two hours. 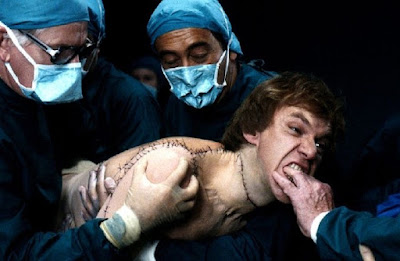 As this column enters its final month I think it's safe to say the bulk of films I've covered over the past year are considered underseen and nowhere near the top of anyone's watchlists. With that said, though, like many of the movies I've written about in 52/82, Britannia Hospital is one not to be overlooked. And the fact that it's part of a trilogy in the loosest sense of the word means that you don't have to see the other two before watching this one (although I highly recommend If... and O Lucky Man). The final leg of the Mick Travis trilogy is a little Monty Python, a little bit Frankenstein, a little bit Network, a little bit 2001: A Space Odyssey, and a lotta bit fun.
Posted by Patrick Bromley at 5:00 AM