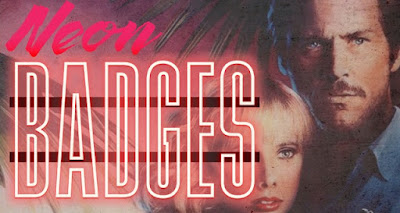 Letterboxd user “dankwit” describes Hal Ashby's 8 Million Ways to Die as a “vapor noir,” a term that conjures up images that primarily and exclusively live in the 1980s. Neon lights reflected on wet streets of the '80s mixed with the smokey nightclubs and classic femme fatales of the the '40s: vapor noir. And that is exactly what you would expect from director Hal Ashby's final film according to the poster and brief synopsis. Instead we're dragged through the blazing hot and filthy streets of Los Angeles with brief respites taken in smokey watering holes or chintzy homes built on the back of the cocaine trade. While 8 Million Ways to Die doesn't deliver the image we've evoked in our our heads, I still find the world we're given one that intrigues and thrills, warts and all.

For fans of Lawrence Block's original novel, you will either be highly disappointed how unfaithful the film is to his book, or you will watch a movie that is almost nothing like the book. Liam Neeson's portrayal of Matthew Scudder in writer/director Scott Frank's film adaptation of A Walk Among the Tombstones is much closer to the man Block created and about whom several novels have been written. Oliver Stone's script for 8 Million Ways is so unlike the novel, we must use the term “adaptation” as loosely as possible when comparing the two. Names carry over, there are emeralds involved, and the inciting incident remain the same, but that is where the similarities stop. The novel and the film are so different it was easy for me – a fan of both – to look at them as two entirely different pieces of entertainment. 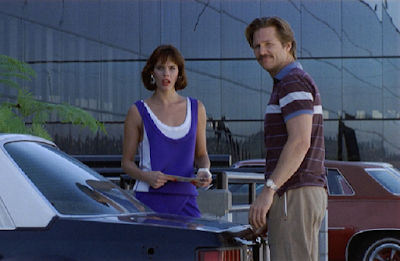 The film opens with one of, if not the greatest title sequences of any movie I've ever seen. A helicopter is flying through downtown Los Angeles as the sun is reaching its morning peak. The freeways have recently been emptied of their rush hour traffic, and all that remain are delivery vehicles, late arrivals, and cops. A voiceover of two men emulate that of old detective serials. “There are 8 million stories in the naked city,” one voice says. “Remember that old TV show? What we have in this town is eight million ways to die.” The helicopter cuts sharply and starts following a sheriff's car from an eagle eye point of view. Slowly, the chopper overtakes the car but the camera stays with the car and the image starts to angle upwards, all the way till we're almost completely upside down. It's a disorienting effect that really is the precursor for what lies ahead.

If you've read Parts 1 and 2, knowing what 8 Millions Ways to Die could have been is all the more heartbreaking to think about. There are glimpses in this final, disastrous cut of the film where we can see what Hal Ashby was going to do with his final product. The title sequence and the the voiceover montage after Scudder (Jeff Bridges) enters his first days-long blackout are clear-cut examples. We hear echoey voices rehashing the turmoil Scudder has recently been through while the visuals of blurred lights against a black backdrop attempt to hypnotize the viewer. This is the first indication of how truly different and weird Hal was going to treat this story. The homage to classic noir – something Hal was embracing in this film – is also apparent like in scenes when Sunny (Alexandra Paul) enters The Keg and all we see is a silhouetted figure walking down the steps; doubled again later when she's standing nude in Scudder's apartment (accompanied by the infamous line, “The streetlight makes my pussy hair glow in the dark.”) Hal also said he wanted Scudder's alcoholism to factor into the movie in a major way. What we get is a decent story of a man battling his disease, but I believe it would have factored into the story in a more weave-type pattern more than just bookends to the story. “One more drink and you'll be dead before you get there,” the nurse at the detox facility barks at Scudder as he leaves. From that point on we don't hear about his struggle to stay sober until his monologue in the final scene. Hal's intention was that we would have gone in and out of Scudder's blackout after Sunny's murder throughout the second act. It's also hard to ignore Scudder's substance abuse problems mirroring Hal's own addictions. The director had a vested and personal interest in his leading character that the studio ignored and threw by the wayside in their final cut of the film. 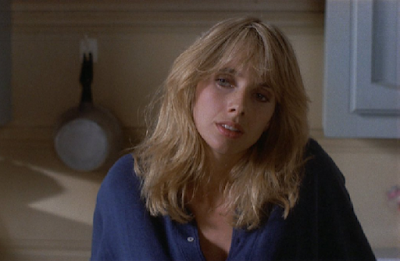 There's no doubt 8 Millions Ways to Die is a mess – some say a disaster, and you'd hear no argument from me. I'm resigned to the fact, knowing what occurred behind the scenes, any scene that doesn't “feel right,” meaning any conversation where we ask questions like, “That's where you're cutting it?” or “You didn't want to use a different take there?” is because of studio interference and wasn't part of Hal Ashby's master vision. As an example, the scene after Scudder leaves detox and goes to his old partner to get his car out of impound, there is something that gives a feel of unease. We're watching a closeup of one man when we should be seeing the other man. Lines of dialogue seem out of place or rearranged. And for a movie that's nearly two hours long we're left with a warehouse full of loose ends; unanswered questions are in no short supply here. First and foremost: who is Angel Maldonado (Andy Garcia)? In Block's novel there isn't a singular character labeled as the big bad. There isn't an Angel. For how big a player he is in the film, we have no idea where our main antagonist came from. While the thrills and the climactic end mostly drown out this nagging question, there's still a speck of curiosity when the credits roll about how the hell Angel became the city's alleged biggest drug pusher.

The other question many viewers can't seem to get past is how does Sunny know Scudder? When he first arrives at Chance's party to meet Sunny, Scudder is is confused as to how she got his name, and on a few different occasions even asks her. Sunny is aloof most of the time with an air of mystery constantly surrounding her. Who she is, how she knows Scudder, and why she ultimately dies is held tightly and closely by the gods of ambiguity. In the novel, Block explains this in one line: “I got your number from somebody that knows you.” That simple yet loaded line is not uttered once in the film. Scudder stops at nothing to solve Sunny's murder. We don't know or see enough of the relationship between these two to buy the fact that Scudder is this driven to solve her murder. “I have nothing to lose, man!” he shouts at Angel in the warehouse where Scudder is prepared to torch the entire shipment of cocaine. He's a man with nothing to lose, sure, but this still doesn't explain why he's obsessively mourning over a dead prostitute he met two days prior. Whether these questions were intentionally left unanswered in Stone's initial script, or if Hal decided they were unimportant, or if they were left in the piles of cinematic gold cut by the studio, we'll never know. 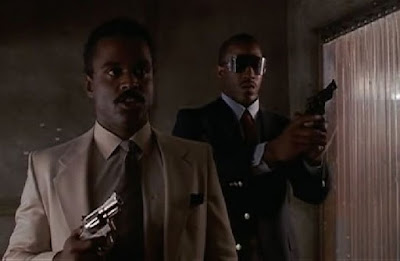 There's plenty to gripe about in 8 Million Ways to Die, but there's also plenty to love. Bridges is obviously top notch. But Randy Brooks as Chance the pimp is phenomenal and equally entertaining when he's on screen. (Shout out also to Tiny Lister as Chance's bodyguard, Nose Guard!) Not only do his line readings land with weight and panache, but his body language and mannerisms are a marvel to witness. In his facial expressions and how he holds his carriage, Brooks is able to show his frustration, confusion, and perplexity in various situations. When Scudder tells him Sunny wants out of the business, and after his famous line of, “I hate money. If it's new it cuts your fingers. If it's old it stinks,” Chance stares down Scudder, swishing his water, until Scudder leaves. The longer the two work and appear on screen together Scudder/Bridges and Chance/Brooks develop this odd sort-of buddy cop relationship and is quite endearing to watch.

Rosanna Arquette as Sarah gives another special performance. Two lines, both spoken by Scudder, describe her perfectly: “You're like Pete Rose around here,” meaning, while Sarah is also a working prostitute, she runs the show (a player/manager); “For a half-assed hooker you’re an extremely arrogant woman,” is very funny but also tells us that Sarah has chosen this way of life for herself. She didn't fall into the life of being a prostitute because she needed drug money. She likes what she does. When we first meet Sarah she owns the room and the respect that Chance gives her tells us he sees her almost like a business partner. She's sober, professional, and carries herself with confidence. But by the time Angel is essentially holding her hostage, she's become the stereotypical, whacked out hooker. Scudder sidebars with her at Angel's house and asks, “What are you gonna do?” With a full glass of Stoli in hand, she replies, “I'm gonna drink. What are you gonna do?” before throwing back and downing the drink. Like Season Hubley's character in Vice Squad, Block and Hal show respect to the profession of being a sex worker by having each of these girls working by choice, not by force. 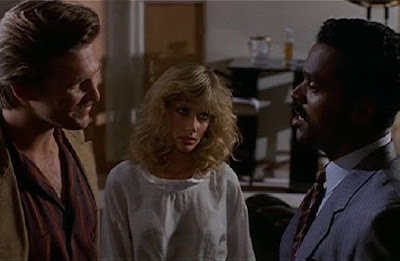 There are more moments of creativity and brilliance in 8 Million Ways than not. The lone chase sequence is exciting, with Scudder speeding and fishtailing after Sunny's kidnappers in a car with one slashed tire; the improvisation, especially during the snow cone scene and the warehouse scene, while uncomfortable, give a realism you don't often get in these types of movies; Angel's guys gathering at the seaside, Angel looking over the bay, Tio rubbing his back, and everyone hugging before the shootout is very ceremonial, very cultish, and very scary; as Angel approaches Scudder on the tram, it's dead silent besides the creaking of the tracks, and then we're startled by pounding drums from the soundtrack. James Newton Howard's score which, as far as I can tell, has never had a proper release, is perfect. The main motif, reminiscent of John Harrison's score from Day of the Dead, slips from major to minor seamlessly; after Scudder “comes to” on the retaining wall at his house the music is touching and heartbreaking, and when his wife approaches and he pushes her away a diminished chord sends us into the throes of depression. And leading up to the warehouse standoff, while Angel's guys gather, Howard haunts us with a low drone that sends chills down our spines while we shift uncomfortably in our seats.

The film ends with Scudder sharing at an Alcoholics Anonymous meeting on the beach. He talks about his life since his last drink two weeks prior, that he's in love, that “Now I wake up. I don't come to,” and how grateful he is to be alive. He says, “I live in a world I didn't make.” Like Hal Ashby, Matthew Scudder was dealt a rough hand. The ways Scudder's life in the film mirrors Hal's is no coincidence, and had we been blessed enough to see Hal's version of 8 Million Ways to Die, I think we could've understood him a little more. We may have even been able to see a one or two more movies from him. While we've been deprived of seeing a creative genius's final vision, what we do get is entertaining, unique, and most of all interesting.
Posted by Patrick Bromley at 5:00 AM