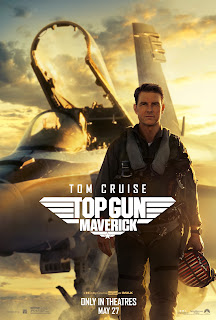 One of Top Gun: Maverick’s most striking images comes in its opening sequence, just after the eponymous pilot (Tom Cruise) hits supersonic speeds in an experimental Navy fighter: Director Joseph Kosinski widens to a stratosphere’s-eye-view as Maverick darts through the frame, leaving a long vapor trail in his wake. Despite the violence in the cockpit — Maverick is predictably pushing the test jet well beyond its specs — this image is serene. That vapor trail is barely a shoestring set against the sprawling terrain below and the vast universe above. Maverick seems to feel that peace, too, and we can’t help but wonder if this is why the would-be admiral is still a lowly stick jockey after thirty-plus years of decorated service. It’s not just the thrill of pushing Mach 10 and sticking it to grumpy superiors like Cain (Ed Harris), who considers him a Cold War relic far past his decommission date. No, it’s that Maverick lives to touch the heavens. That is his function. Much like the relentless superstar portraying him, Maverick has a standing dare with oblivion: Catch me if you can. 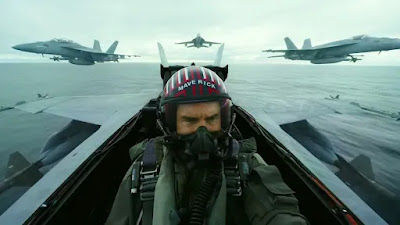 But while steely bravado and a winning smile were all Maverick needed to skate through the Reagan era (era) unscathed, oblivion might finally be on his tail. This latest stunt with the supersonic jet — which Maverick dutifully crashes — puts him in a bind that not even old buddy and distinguished Admiral Iceman (Val Kilmer) can ignore. Maverick is collared and presented with one final mission before forced retirement: Lead a team of Top Gun graduates on a suicide mission to destroy a uranium enriching site controlled by a hostile enemy. Among the pack — which includes swinging dick Hangman (Glen Powell) and plucky female (!) pilot Phoenix (Monica Barbaro) — is Rooster (Miles Teller), son of Maverick’s long-lost best friend, Goose. The younger (and significantly more mustachioed) man still resents Maverick for his father’s death, while Maverick’s protective instinct is impeding Rooster’s career ambitions. As time ticks away, it’s up to Maverick to heal old wounds and sharpen new skills, to put that need for speed to good use one last time.

Whereas 1986’s Top Gun was a jingoistic symphony of American exceptionalism, its sequel spars with that cocksure, Win Now attitude in an entirely new context. Maverick is far too old to be showing up the brass and sneaking out of bedroom windows at night (this one belonging to Jennifer Connelly’s Penny, the infamous “admiral’s daughter” mentioned in the first film), but he — and Cruise it seems — is so fervently committed to life in the Danger Zone that we have no choice but to believe in him. Maybe that’s because Maverick’s flock of screenwriters have presented a scenario tailor-made for our Captain Mitchell’s particular skill set: An attack pattern composed of death-defying climbs and hairpin turns, maneuvers that require a radical belief in, as the film puts it, a series of “consecutive miracles.” Although Cyclone (Jon Hamm) and the rest of the Navy are perfectly prepared to sacrifice a few pilots in exchange for a successful mission, Maverick insists that each and every one of them comes home and plots a series of madcap drills designed to push them to their limits. 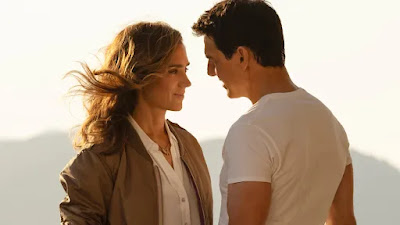 And therein lies the joy of Top Gun: Maverick, a rapturous dose of cinematic bombast that puts every other CGI-laden summer tentpole in recent memory to shame. Though Tony Scott’s original film thrived on a turbo-charged swagger that would codify the aesthetic of an entire silver screen generation, technology has since advanced far enough to allow Cruise and company to inject the sequel with his balls-to-the-wall Mission: Impossible energy. Claudio Miranda’s onboard cameras bring us into the dogfights like never before, punctuating a palette of breathtaking aerial photography sure to remind audiences why we go to the movies in the first place. There’s certainly green-screen trickery here and there, of course, but Paramount hardly needed a series of behind-the-scenes videos to convince us that their cast is actually strapped into those cockpits and pushing those Gs (though they released those, anyway). Kosinski’s deft storytelling keeps us invested in the visuals at every turn, threading genuine stakes and crucial character arcs right into his remarkable action. 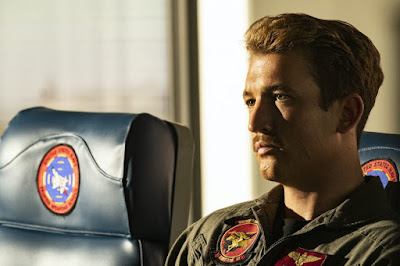 While most legacyquels struggle to justify their existence (or, like Ghostbusters: Afterlife, take refuge in empty nostalgia), Top Gun: Maverick plays like a redemption story most akin to Ryan Coogler’s Creed. Though he’s not nearly as layered as Rocky Balboa in that film, Maverick is also living in his past without truly processing it, confusing a young man’s excuses with a wise man’s virtue. Both films are at their strongest when they’re using innovative action as narrative and giving their audience a fresh perspective on their larger-than-life characters before they ride off into the sunset forever. That’s a hell of a lot more gratifying than easter eggs and cameos — though this film does dip its toes in that particular pool to great effect — as is Tom Cruise’s defiant insistence that the age of the movie star is not yet over. As with so much of his recent work, Top Gun: Maverick reaffirms Cruise’s commitment to big screen spectacle done the old fashioned way. The 60-year-old star knows that the end is near, but as Maverick assures us with a wry smile, it’s not today.

Top Gun: Maverick is in theaters on May 25th. See it on the biggest, loudest screen you can.
Posted by Patrick Bromley at 5:00 AM