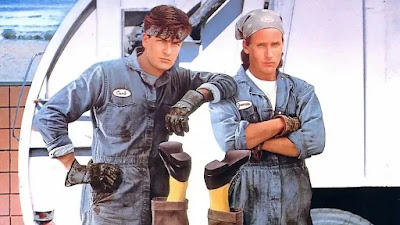 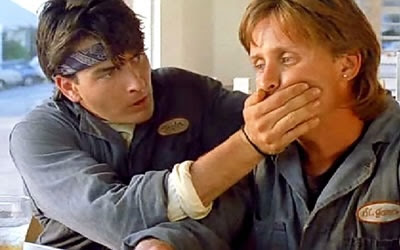 There I am, eight years old, at Grandma Jo’s on a Friday night, curled up on the floor. Dad pops the first film of our weekly double feature in the ol’ top-loader, and that pulsing score from Stewart Copeland kicks in as we’re watching a clandestine operation of dumping oil drums of toxic waste into the ocean. I distinctly remember feeling like I was watching a real, grown-up movie and I felt excited. After that it seemed like we’d rent Men at Work on a monthly basis for the next few years. I hadn’t watched the film since, though, so when I turned it on for the first time in three decades I was a little nervous. I was hoping it was going to be as funny and exciting as I remembered it being all those years ago. And while nostalgia may play a small part, this movie still kills me. It’s funny as hell, with great chemistry between the brothers Estevez – Carlos and Emilio – and the inimitable Keith David. As expected, it screams early '90s, but that’s easily forgiven because of the laughs it brings. Two slacker garbage men with aspirations of opening a surf shop mistakenly uncover a nefarious operation wherein a company is dumping toxic waste into the bay. With the help of their angry supervisor, they set out to bring down the bad guys. (currently streaming on Prime) 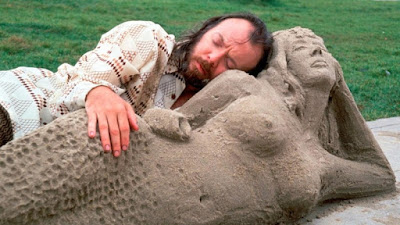 In his lone cinematic directorial effort, Bud Cort delivered one of the oddest and rawest tales of toxic male behavior. Whether this movie is good or not is still up for debate in my head ever since I saw it back in January of 2021. And whether or not Cort actually set out to make a movie about the toxicity of male behavior (especially toward women) or just a weird romantic comedy is also still up for debate. Whatever it is and whatever my ultimate feelings reveal themselves to be is irrelevant. The movie is weird. The movie is interesting. The movie is a perfect fit for Junesploitation. Cort plays a locally famous poet who meets a beautiful woman and becomes obsessed with her. While they hold the bare minimum of similarities, Ted & Venus and Harmony Korine’s The Beach Bum could make an interesting double feature. (find it on YouTube) 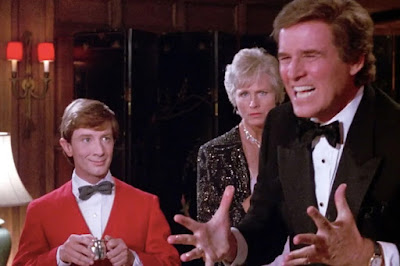 First thing’s first: all due respect goes to the one and only Marcus Pinn (aka Pinnland Empire), the president of the Clifford fanclub and sole reason this oddity has gained a cult following over the past few years. If I had seen this on the video store shelves in the '90s, I’d since forgotten. And when it started popping up that people were watching it because of Marcus I avoided it like the plague because it looked like the dumbest shit in the world. “Surely these people ‘like’ this movie ironically.” Reader, how wrong I was. I laughed my ass off. Tears were streaming down my face. But I have to say this: if you’re not a fan of Martin Short’s ultra-goofy, SCTV-style comedy, this movie will be like rolling around in a cactus patch in your birthday suit. But, if you don’t have a black soul and you like to laugh like a little kid, this movie is for you! Martin Short plays Clifford, a 10-year-old boy who wants nothing more than to visit Dinosaur World. His horrible parents drop Clifford off at his uncle Martin’s on their way to Hawaii, and as it turns out, Uncle Martin is the designer of Dinosaur World. Clifford turns his uncle’s life into an upside down living hell until he gets to go to the amusement park of his dreams. (rent it in the usual spots) 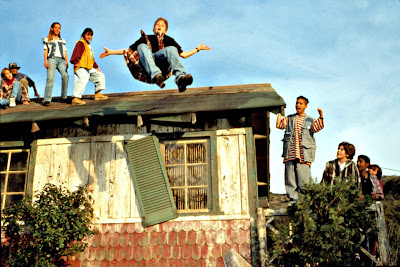 Disclaimer: if you didn’t grow up with this movie, chances are you’re not going to dig it. Let’s face it, it’s a kids movie. With that said, if you’re participating in F This Movie’s Junesploitation™ then chances are you’re open to watching almost anything, so why not throw in some lighthearted fare to cleanse your palette from all the sleaze you’ve been watching? I was a camp kid growing up, so summer camp movies really speak to me, and when Camp Nowhere came out it was like my dreams come to life. I loved camp and the adults that ran everything and kept most of us alive, but I always thought how much fun it would be to have a week of camp where it was just us kids running wild. This movie shows us the PG version of the good and bad that could happen if that dream ever came to fruition. Conning their parents into thinking they’re headed to computer/drama/fat/military camp, four friends and a creditor-ducking former drama teacher rent a camp for the summer. With initial plans of it just being the four friends, things quickly get out of control and dozens of their classmates want in. It’s the summer of their dreams until the parents want to visit for parent weekend, so the kids band together to pull off the ultimate ruse. (currently streaming on Disney+) 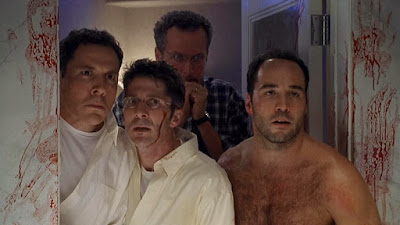 This is my favorite theater experience of all time. My friends, Keith, Kevin, Mike, and I saw this together, and, being dumb high school kids, thought it would be funny for each of us to sit in separate corners of the theater, seeing we were the only ones in there. It was all fun and games until a hooker died, and one by one, each of us came back together in the back row to finish watching the movie. After the credits played, we stood up, silently walked out into the night, and rode back home without uttering a single word. It wasn’t until we were sitting in my driveway when Kevin said, “What the fuck was that?!?!” When a friend says, “Oh my god The Hangover? So crazy right?” you slap them across the face and forcefully sit them down to watch Very Bad Things. After the credits role and your friend, through tears, says, “What the fuck was that?!?!” you simply say, “Yes,” and walk out. This is, without a doubt, one of my favorite comedies of all time and I love being a cheerleader for it. Friends travel to Vegas for a bachelor party, things get out of hand, then things get really out of hand until the credits roll and you say, “What the fuck was that?!?!” (rent it in the usual spots)
Posted by Patrick Bromley at 5:00 AM