Exploit This: An Introduction to Marjoe Gortner 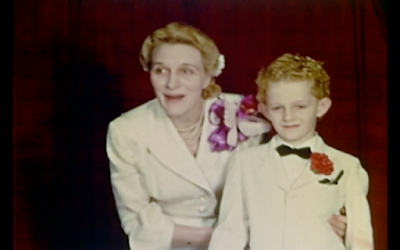 In 1971, journalists Howard Smith and Sarah Kernochan decided to make a documentary. They met up with a 27-year-old former child preacher who was back out on the pentecostal circuit. Tall and handsome with a head full of curly locks, Marjoe Gortner had all but faded into obscurity since his days of inspiring and healing thousands of churchgoers throughout the United States. He'd been hard up for cash and had been back on the revival circuit for two years. But now, with a film crew in tow, he was going to expose these tent revivals for what they really were: a circus full of swindlers who shouted words by which they didn't abide trying to collect as much money as possible from unsuspecting believers. The film, simply titled Marjoe, would go on to win the 1972 Academy Award for best documentary. It would also jumpstart the Hollywood career of this writer's favorite actor of all time. 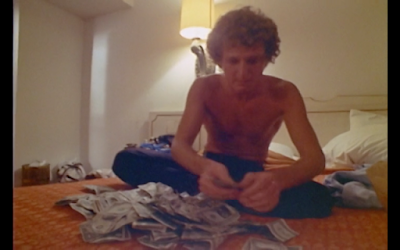 Hugh Marjoe Ross Gortner (Marjoe, a combination of Mary and Joseph) was born in Long Beach, CA on January 14, 1944. His father, Vernon, was a third generation preacher. His mother, Marge, was also a preacher but more professional stage mom than anything else. Marjoe was born by cesarean section with the umbilical cord wrapped around his neck, thus donning him “miracle child” from his first breath of oxygen. From the moment he was born, his parents saw him as divinely inspired: a born entertainer goaded along by dear old enterprising Mom and Dad. For the first three-and-a-half years of his life, Marjoe was forced to memorize as many sermons and learn to play as many instruments as possible. Vernon and Marge saw Marjoe as their ticket to riches. “Rehearsing” her son, Marge would force him to read, recite, and repeat sermons that she or Vernon had written. When the child would become tired or make too many mistakes, she would smother him with a pillow or hold his head under a running tap. Before he was four years old, Marjoe Gortner was standing in front of congregations of hundreds, spewing forth fire and brimstone messages forcefully embedded in his brain by his parents. As a four-year-old, Marjoe became the youngest ordained minister to legally marry a couple. The Gortners saw the cash cow they had and hit the road. From Charlotte to Palo Alto, the Gortner family traveled the country. Marjoe had memorized several different sermons, and when asked he'd say he got them while he was sleeping, and no he never memorized what he said. Of course, this was the coaching of “Mom-Marge,” who also taught him his catchphrase “I'm here to give the devil two black eyes” during radio interviews. As life on the road continued, the Gortner family grew, adding another boy, Vernoe, and a girl, Starloe. Along their travels they also picked up an entourage of volunteers who traveled cross country with the family setting up the three-pole tents and manning doors and offering buckets. These people, like Jesus' twelve disciples, left their lives behind to follow this young miracle worker without being financially compensated.

Neither the parishioners nor the volunteers knew what was really going on. Vernoe and Starloe were too young, but eventually Marjoe caught on and realized he and his parents were con artists. As Marjoe got older, he wanted to make some of his own decisions. He was tired of his mom constantly destroying his hair with bleach and perms; he wanted a pompadour. Reluctantly Mom-Marge agreed. The curly locks were no longer there to hide Marjoe's larger-than-average ears, though. Mom-Marge decided to glue her son's ears down, but that only lasted so long. So she had Marjoe's ears surgically pinned down. As he neared double digits, Marjoe started to lose his adorableness, which meant donations slowed down. Mom-Marge announced that anyone that donated a twenty dollar bill could give little Marjoe a kiss. Against his wishes, Marjoe was pushed through the aisles collecting twenties and being forced to kiss whoever gave money. By the time Marjoe was twelve, the family business was failing, and his mother was in the beginning stages of an affair, so Vernon left his wife and kids for California. 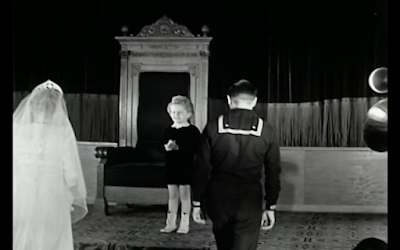 The next two years – the last of Marjoe's career as a child preacher – found his mother dragging her three kids all across the country, promising good prospects in the next town, only to be disappointed. Mom-Marge also started feeling lonely and began a futile search for a man who could support her and her children. On one hand, Marjoe finally experienced the semi-normal life of a pre-teen; hikes through the woods, playing with his siblings instead of memorizing sermons, etc. And while visiting another preacher's house, Marjoe had his first sexual experience with the pastor's 16-year-old daughter. On the other hand, most of the other preachers that Mom-Marge attempted to envelop into her life of schemes with sexual favors were scumbags. On one occasion, the family was literally run out of town because Mom-Marge had a sexual rendezvous at a seedy motel with the town pastor. On two separate occasions, Marjoe was a victim of sexual assault. 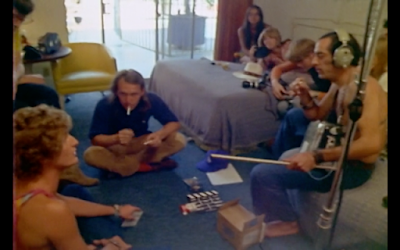 Eventually Marge realized the money as a traveling evangelical had completely dried up. They kept moving until finally landing in Santa Cruz, CA. Marge took a job as a waitress at a diner, eventually marrying a man who gave her money to open her own called Marge's Pit. Having sent Vernoe away a few years prior to live with Vernon, Marge did the same with Starloe, and now it was just Marge and Marjoe. The lone Gortner child took a job as a barker on the Santa Cruz boardwalk, employing his preaching gifts in bringing hoards to play different carnival games. Marjoe met a girl who, after their tryst, told him she was pregnant. They flitted off to Reno, NV, for a shotgun wedding, moved back to California, and Marjoe became Ross. For the next several years Ross Gortner worked as a shoe salesman, jockeying his way up the company. He'd lost touch with Marge, the woman that dictated everything he did and said for most of his life, his marriage was failing, and he was bored. Ross got out of the shoe business, filed for divorce, and took odd jobs, including being a pimp. Life in the real world as a normal adult who no longer carried any star power was so much different than the life he had lived for the first fourteen years. 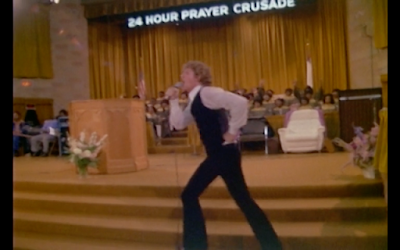 By the time we meet up with the filmmakers, the Bible Belt is still hungry for The Word, Ross was back to Marjoe, saw an opportunity. The film opens with Marjoe coaching the crew on how to act and what to say; he tells them what they're about to see, that it's an act. As the viewer, we get unparalleled access to the workings of the tent revival circuit. Pastors gleefully count money after begging their poor congregants to give everything they have. At one point Marjoe is counting stacks of cash on a hotel bed. In between shots of him strutting in front of the crowds like Mick Jagger, laying on of hands during healing services, and hawking merchandise, Marjoe explains what we're watching, how it works, and how long it's been going on. At the end of the film we're left to make a decision about what we've just seen. Marjoe says, “I'd like to think that I'm bad, but not evil.”
Posted by Patrick Bromley at 5:00 AM