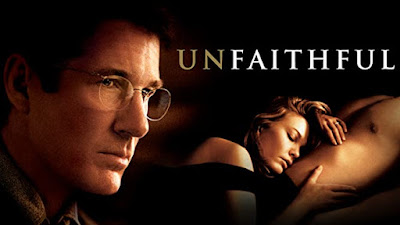 Nominated for “Best Actress of the Year” (Diane Lane) at the Golden Schmoes Awards. She lost to Naomi Watts in The Ring.

• Best Scene/Moment: There’s a scene where Diane Lane is at home after meeting Olivier Martinez, and she looks at the business card he gave her (as if she’s contemplating calling him and beginning an affair) followed by a shot of her looking up and we see the family dog is giving her a disapproving stare. It’s a brief moment and kind of amazing.

• Best Song: “Exit Music (For a Film)” by Brad Mehldau. It’s a jazzy version of a Radiohead song. 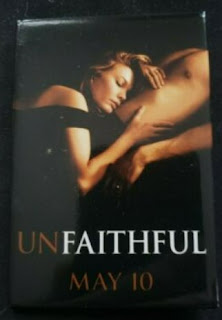 • Best Merch: You can get a promotional Unfaithful movie pin for only $7.59! It says it ships in 24 hours too, so if you’re planning an illicit fling in a day or two, you can pin this to your clothes to let everyone know.

• Director Check: Unfaithful was directed by Adrian Lyne, who became a brand of sorts directing mostly adult-skewed dramas and thrillers centered around sexuality. His feature debut was the 1980 drama Foxes starring Jodie Foster, followed by the hit film Flashdance in 1983. His brand became codified soon after with 1986’s 9-½ Weeks and then Fatal Attraction the next year (for which he was nominated for a Best Director Oscar). Next, Lyne directed the fantastic horror-drama Jacob’s Ladder, which was a departure of sorts before returning to his normal fare with films like Indecent Proposal, 1997’s Lolita remake, and Unfaithful. Lyne is a stylish filmmaker and good with actors. I need to go back and see some of his films that I’ve missed (e.g., Fatal Attraction and Flashdance). Lyne returned to directing this year with Deep Water (starring Ben Affleck and Ana de Armas) following a 20-year gap after Unfaithful. The movies have a fair amount in common.

• Year 2002 Movies to Trailer Before It: Enough, High Crimes, The Mothman Prophecies 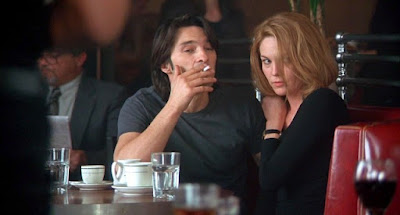 • Mall Movie? No, this is an adult-skewing drama so it would play at the classy theater instead of the mall.

• Only in 2002: A little kid wants a New York Knicks Latrell Sprewell jersey for his birthday.

• I Don’t Miss: Olivier Martinez. I’m sure he’s a nice guy, just not my fave on screen. 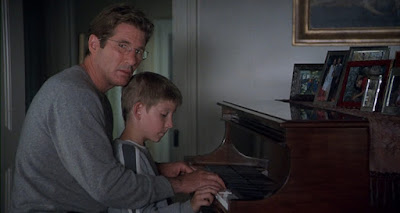 • What I Thought in 2002: I saw Unfaithful in late 2002 on DVD and remember thinking it was really engaging with great performances from Diane Lane and Richard Gere. I liked the pivot the movie takes after the first two acts.

• What I Think in 2022: I still think the movie’s good, but the first two acts are what I enjoy most about Unfaithful now. The last act is too reminiscent of Deep Water so, unlike before, it became distracting how similar the two movies are in their final stretch. Diane Lane is terrific in this and reason enough to give it a watch.
Posted by Patrick Bromley at 5:00 AM