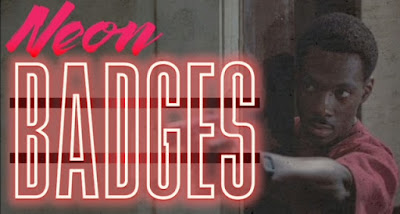 5 out of 5 tailpipe bananas.

Writing a “review” of a movie that you consider to be perfect is a near impossible task. I have seen Beverly Hills Cop at least a dozen times in my lifetime. In the last month alone I've watched it three times. (That's the type of dedication you can expect from Neon Badges.) Instead of this becoming The Chris Farley Show (“Remember when... That was awesome!”), I'm taking a different approach. I am highlighting a single negative review of Beverly Hills Cop and dispute the author's points. Because if nothing else, I'm a petty bitch.

That author is a critic I grew up reading; the man whose words inspired me to watch movies; the man whose snark and sarcasm, to this day when I watch old episodes of his show or read past reviews, gives me brain aneurysms. Roger Ebert will forever be my favorite film critic because he truly loved movies and was a master of the written word. But no one else's words can inspire the rage within myself that Roger's could when he didn't like a movie. 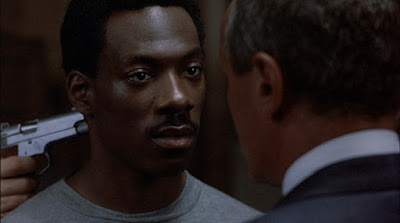 Critique: “Eddie Murphy looks like the latest victim of the Star Magic Syndrome, in which it is assumed that a movie will be a hit simply because it stars an enormously talented person. Thus it is not necessary to give much thought to what he does or says, or to the story he finds himself occupying.”

Response: What, pray tell, qualifies a movie from being a “hit,” Roger? Beverly Hills Cop was the highest winter opening for Paramount ever at that point, it opened at number one at the box office, it ended up on over 2,000 screens – the first movie to ever do so, and it played in theaters for over a year. Just because it's not Forman, Wenders, or Cassavetes (directors of Ebert's top three of 1984) doesn't disqualify the movie from being a hit.

Critique: “Even while we're watching the thrilling chase, however, stirrings of unease are beginning to be felt: Any movie that begins with a chase is not going to be heavy on originality and inspiration.”

Response: The movie is called Beverly Hills Cop and it stars the hottest comedian in the world. Roger, an introspective Swedish black and white drama about a man playing chess with death this is not. Even in 1984, even if you hadn't seen a commercial or a poster or a billboard, how would anyone in their right mind walk into a theater to see a movie called Beverly Hills Cop expect anything other than a movie that in all likelihood would have a thrilling car chase in the first 20 minutes? With the director of Going in Style and first-time writers, I don't know what you were expecting, Roger?

Critique: “[The movie] can become a perceptive and pointed satire about American attitudes... Or it can go for broad, cheap laughs... [It] doesn't pause a moment before taking the low road... Murphy tries to register in a hotel and is told there isn't any room. He loudly pulls both ranks and race... accusing the desk clerk of racism. This is (a) not funny, and (b) not convincing, because Beverly Hills desk clerks were not born yesterday. If the people who made this movie had been willing to listen to the ways that real people really talk, they could have made the scene into a jewel instead of an embarrassment.”

Response: “An embarrassment”?!?! I think ol' Rog thought he was watching a documentary about class in America. Granted, director Martin Brest wanted to make a point that the social commentary of the film focus on the difference of the classes rather than race. In my oh so humble opinion this goal is accomplished. For the general, popcorn-munching crowd that came to see this movie, I thought the message worked. It wasn't spoon-fed to us, but it wasn't hidden under layers of other subtext. And for god's sake, “... not convincing, because desk clerks weren't born yesterday.” We've already had a multi-car-semi car chase through residential streets of inner-city Detroit. Any normal human being would have suspended any sense of realistic perception at this point. 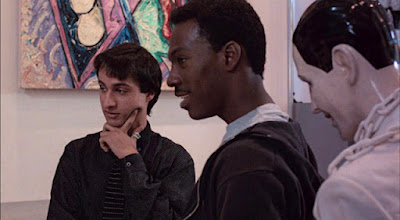 Critique: “When Murphy tries to move against Maitland, he comes up against the Beverly Hills Cops, including an Abbott and Costello team that supplies unnecessary pratfalls, successfully undermining the credibility of any police scene that threatens to work. But wait a minute. What's this movie about, anyway? Is it a comedy or an action picture?”

Response: The answer, Roger, is yes. Y-E-S. And I beg your pardon; John Ashton and Judge Reinhold don't compare to Abbott and Costello for you. This is an action movie. This is a comedy. This is not about real-life cops. 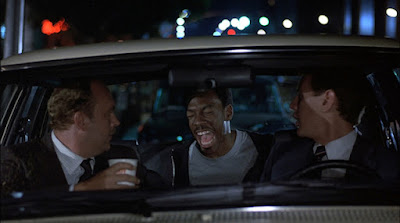 Critique: “[Murphy] is not an action hero, despite his success in 48 Hrs., and by plugging him into an action movie, the producers... reveal a lack of confidence in their original story inspiration. It's like they had a story conference that boiled down to: "Hey gang! Here's a great idea! Let's turn it into a standard idea and fill it with clichés, and take out the satire and put in a lot of machine guns!"

Response: On this, Roger and I can agree. Eddie Murphy is not an action star. He's a comedian. I understand it's the critic's job to respond to the movie they have just seen. It's not their job to research how this movie came to be, and all the trials and tribulations involved in the filmmaking process. So I also agree that Brest and the producers didn't seem to have a lot of confidence in what they had to work with before production began. And, if you read parts one and two of this edition of Neon Badges, you know that was actually the case. Brest knew he was working with a comedic genius and that Eddie needed to come up with his own dialogue to make the character work. And it does. Axel Foley is a beloved character of cinema and it's only because Eddie Murphy got to make Axel his own.

Roger, I love you. I'm constantly turning to your words for inspiration. Your enthusiasm for cinema was and still is infectious. Wherever you are I hope you're having a blast with all those legends of film past. And you're wrong: Beverly Hills Cop is a hit, and it's great.
Posted by Patrick Bromley at 5:00 AM