Exploit This: JESCO AND THE WHITES 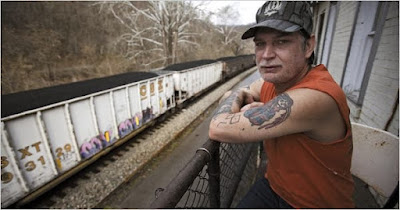 When documentary crosses the line into exploitation.

One of the final things Jesco White says in the short documentary Dancing Outlaw grabbed my heart and crumbled it as if it were a clump of dry soil. “I might have an all new life the next time you see me.” A month prior, I had watched The Wild and Wonderful Whites of West Virginia, which featured Jesco 18 years after Dancing Outlaw. Reader, he did not have an all new life.

Jesco White was born in 1956, abandoned a few years later, and subsequently “adopted” by Bertie Mae and Donald Ray (better known as D. Ray) in Bandytown, WV which is located in Boone County, smack dab in the middle of the Appalachian Mountains. As is the case in this part of the country, most work is found in the dangerous mining or logging industries. D. Ray White was a mountain dancer and regional legend having appeared on local television, including being profiled on the PBS special Talking Feet: Solo Southern Dance – Flatfoot, Buck, and Tap. His style of dancing was a mix of tapping and clogging. In 1985, D. Ray was involved in a domestic dispute that originated as a fight between his son Dorsey and a neighbor. This incident ended with D. Ray, Jesco, and Dorsey being gunned down, ultimately ending in the murder of D. Ray. While life didn't seem ideal (especially to us privileged folk) for most residents of Bandytown, but especially the Whites, the tragedy of losing the patriarch of the family sent most of the family down a dark spiral. Drinking and drugging were already prevalent, but depression onset by grief didn't help matters. 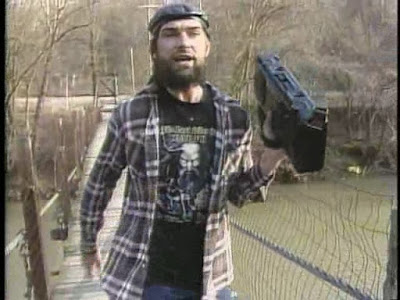 Jesco was already spending his time drinking and huffing gasoline and lighter fluid, but it seemed he was also dealing with undiagnosed cases of manic depression and dissociative disorder. His wife at the time says there were three people within her husband. Jessie, her favorite, whom she referred to as “the most beautiful man I could love;” Jesco, “the devil himself;” and Elvis, an obsession Jesco had developed that turned into him spending several hours at a time impersonating the late singer and entertainer. Enter the film crew.

PBS had developed a series called Different Drummer which set out to explore life in the Appalachian Mountains. Director Jacob Young, a native of the region, was tapped to direct several of the episodes. For the show, Young profiled junkyard owners, prison reform experts, songwriters, industrialists, chemical plant operators, white supremacists, hotel owners, and Jesco White. Airing in 1991, Dancing Outlaw shows a man passionate about his style of dancing with big dreams. It also paints a portrait of a man dealing with severe depression, dependent upon alcohol, heartbroken over the murder of his father. The camera takes an unbiased, unfiltered look at a world so foreign to me I can't help feeling sad yet fascinated by this man. We meet Jesco's wife, Norma Jean, and get a glimpse into their marriage, warts and all. We meet Jesco's mother, Bertie Mae “The Miracle Woman” (for raising 13 abandoned children) and hear the heartbreak of a widow and mother who has suffered the wide-reaching effects of tragedy. And we briefly meet a few of Jesco's siblings, including Dorsey and Mamie. It's an unflinching look at these people that spends no time judging their lifestyle. 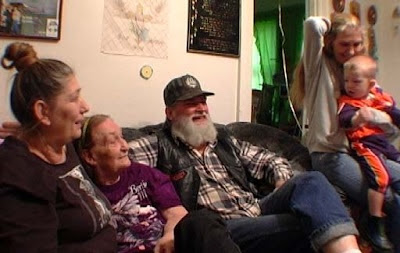 While working on his first documentary The Wild World of Hasil Adkins, filmmaker Julien Nitzberg had met Mamie White at an Adkins concert while she was tripping on acid after breaking up a fight. She insisted he come and meet her brother Jesco. Nitzberg went to meet the Whites a few days later and filmed the encounter. That footage became the jumping-off point for Jacob Young to create Dancing Outlaw, which Nitzberg is credited as producer. Eighteen years later, Johnny Knoxville and Jeff Tremaine of Jackass fame had seen Dancing Outlaw, reached out to Nitzberg, and asked if he'd be interested in doing a feature-length documentary on the entire White family. So Nitzberg returned to Bandytown and filmed a year in the lives of four generations of Whites.

While Jesco is featured in The Wild and Wonderful Whites of West Virginia, we spend most of the time, it seems, with Mamie, as well as meeting several more siblings, nieces and nephews, and grandchildren. Unlike my empathetic reaction to Dancing Outlaw, I spent most of the 88 minutes in a mix of embarrassment and pity. Whereas Young accomplished what a documentarian should – film what you see without bias – Nitzberg seems to have taken the Jackass approach – film people doing stupid shit – and exploits the hell out of this poor family's living situation. It's true Nitzberg just let the cameras roll, and it seems like we get a very sad and depressing all-access pass to the Whites, but I get the impression it was filmed to get a laugh. Drinking, drugging, fucking, tits, dicks, and everything there is to see, we see it all. Except it's not funny. It's not entertaining. We're watching a multi-generational family completely out of control. Most of these people should either be in jail or rehab. This is what the camera is telling us. “Look at these idiots! Judge them!” It's like watching an early Paul Morrissey film where we watch people shoot up heroin and fade into oblivion. (Please seek out Like Sleep, 1965.) But where Morrissey's version is artistic, albeit sad, Nitzberg and the Dickhouse crew seem to be laughing at the Whites. Without verbally egging them on, I have to assume the crew knew that by taking cameras into these peoples' lives the subjects would raise their level of substance abuse and stupid antics to a whole new level. 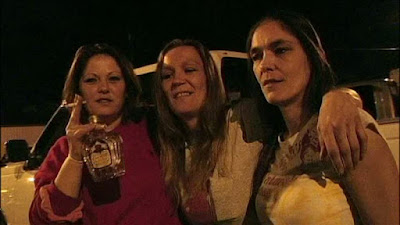 The film has only a small handful of moving, genuine, raw, and honest moments. One is where Kirk, Jesco's niece, gives birth and immediately loses custody of the newborn due to its being born addicted to drugs. Kirk then goes off to extended in-patient rehab and regains custody of her children while committed to staying sober. Sadly, Bertie Mae passes away during filming and the aftermath shows again the wide-reaching effects of the death of the matriarch. Nitzberg is able to interview Poney White, the only child of D. Ray and Bertie Mae to have “escaped” Boone County and is now in Minnesota. But the camera also sees the release from prison of Mamie's daughter Mousie. In the car waiting for Mousie are members of her family with drugs and booze for her. Mousie knows she's headed right back to her cell, but she doesn't care. And neither does the camera. In fact, it seems like the camera is telling her to get drunker, higher, party more, be more crazy. And Mamie spends a large portion of the film with a beer in one hand, a joint in the other, and her grandchildren sitting right next to her. Guns, drugs, and booze are common objects found on coffee tables and countertops, as if the filmmaker said, “Let's dress the room up a little more.”

I understand life in this part of the world is hard. Most of the people are working jobs that could literally kill them and have no hope of “getting out.” When they're not working they want to let off as much steam as possible. I'm trying not to judge these people when the film is telling me to do just that. Nitzberg and Knoxville and Tremaine went in to flat out exploit these very real people and their very real tragedies. They could have easily taken the Young approach and, with an empathetic eye, shown the struggles of these people and the unflappable bond the White family has. So I'm left asking this question: when does a documentary cross the line into pure exploitation? And is that the right thing to do?
Posted by Patrick Bromley at 5:00 AM