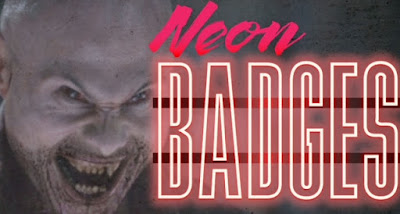 When I was a senior in high school, I moved my bedroom to the basement. Where we lived – the suburbs of the suburbs – we didn't have sidewalks or streetlights, so at night it would get very dark. In the back of our half-acre yard were a line of pine trees, and the only time you could see anything back there would be during a full moon or a thunderstorm with lots of lightning. As soon as I started sleeping in the basement, a recurring nightmare haunted me night after night. In the nightmare, a thunderstorm wakes me up. I walk over to the open window that looks out into the backyard, and during a flash of lightning I see the silhouette of a person standing along the treeline in the very back of the yard. Every time the lightning flashes, the figure gets closer and closer, until finally I'm standing face to face with a man dressed as a clown from Pagliacci, eyes completely black with only a window screen separating us. During one of the dark moments, the clown says, “I've come for you,” in a very kind, matter-of-fact way. Then the lightning flashes one last time and all I see are razor-sharp teeth as he jumps through the screen.

Then I wake up. Every. Single. Time. I had that dream from when I was 17 until I was almost 30. Multiple times a week. “What does this have to do with a review of 30 Days of Night?” you're asking. I started having this dream in 1999. When I saw 30 Days on opening night in 2007, I nearly shit my pants when I realized the clown in my dream looked exactly like Danny Huston's vampire except in the clown get up. I saw this figure in my dreams eight years before I saw him on screen! 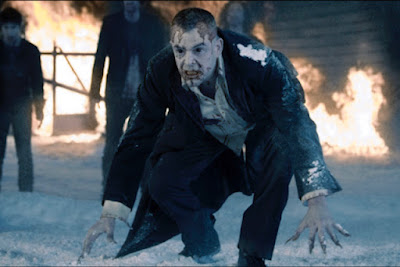 Seeing my nightmare come to life on screen did nothing to quell the bad dreams. I still had that nightmare for about five more years. But it became one of my all-time favorite vampire movies. 30 Days of Night opens with Sheriff Eben Olesen (Josh Hartnett) and his Deputy Billy Kitka (Manu Bennett) overlooking the Arctic Ocean outside the town of Barrow, Alaska, the literal top of the world. Every year this part of the world is thrown into darkness for 30 days straight, as the sun doesn't reach that far north. It's the last bit of sunlight these people will see for the next month, and most of the townspeople are boarding a plane heading to Anchorage while the brave remaining few hold down the fort for the season. Unbeknownst to Eben and Billy, a stranger (Ben Foster) is just arriving, and with him a host of trouble for Barrow. Eben's soon-to-be ex-wife Stella (Melissa George) is on her way out of town, but a car wreck has caused her to miss the flight, and now she's stuck for a month.

Strange occurrences start to pop up after the sun has set, and Eben suspects the Stranger is involved. Soon the power goes down, generators are disconnected, and the town is thrown into chaos. The Stranger is revealed to be the “familiar” for a crew of vampires led by Marlow (Huston). As the vampires commence their grisly attacks, a small group of survivors congregate and shuffle incognito from structure to structure to avoid becoming dinner themselves. For 30 days, the number of survivors dwindles at a rate much faster than the vampires', and we're left with a final showdown between Eben and Marlow. 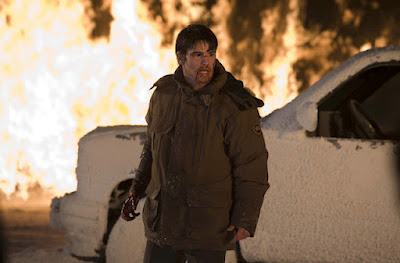 Lest anyone think my love for 30 Days of Night is purely nostalgia-based or fleeting, my first-born son is named Eben. This movie is insanely rewatchable. To this day, these are the scariest vampires on film. I don't think there's any other vamp that comes close. By no means is this the best vampire movie ever made, but no other vampire has ever scared me the way Marlow and his crew do. Played by character actor Danny Huston, Marlow is the antithesis of the romantic bloodsucker created by Bram Stoker, the long-haired models found in Neil Jordan's film adaptation of Anne Rice's Interview with the Vampire, or the sparkle vamps that captivated adolescent girls and middle-aged women alike in Stephenie Meyer's Twilight series. Before commanding his crew of famished murderers to finish what they came to do, Marlow says, “For centuries we were only bad dreams. Kill them all.” Upon their arrival, Marlow instructs them to separate the heads from the bodies of their victims. “Do not turn them,” he says. He has no intention of adding to his race. The sole purpose of their visit is to kill and feast. One of the darkest moments of the film is when the young woman the vampires have captured pleads, “Please, God.” Marlow bends down to meet her eyes, looks up to the sky, and then back to her. “God?” he says softly. “No God.” A chilling reminder that these monsters are constantly living in survival mode for all of eternity. They have zero interest in anything other than eating. 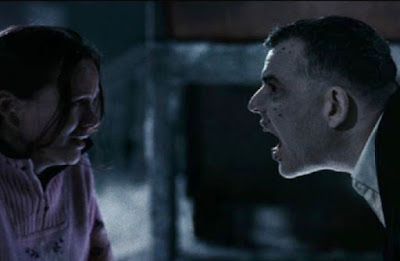 While the monsters themselves are terrifying, perhaps the darkest moment of the film comes when Eben and Stella realize Billy is alive, hiding in his house. They race over to Billy's, only to find that he has shot and killed his wife and children. “I heard the screams,” Billy says while sobbing. “I didn't want them to die like the rest.” Like the ending of [redacted to avoid spoilers, but IYKYK], the gun jams, leaving Billy to wallow in immense grief. Eben grabs Billy by the head, wanting to comfort his friend while at the same time smash his skull in. “You have a family! You don't ever hurt them!” Just writing those words breaks my heart all over again. The moments of levity are very few and far between in this film. Director David Slade set out to create a very dark in tone and scary vampire movie, and he accomplished just that. By the end of the film, Stella is left holding the charred remains of her husband while the entire town has burned to the ground leaving only a few survivors. The kicker is that even though Marlow has been killed in a ridiculous moment where Eben punches through his head, as far as we know it, the remaining vampires have escaped. The world has not been saved, and in fact, we can assume this will happen over and over again until all the vampires are killed or, the more likely scenario, the entire world is consumed and/or turned. The levity we often get at the end of horror films is nowhere to be found at the end of this one. 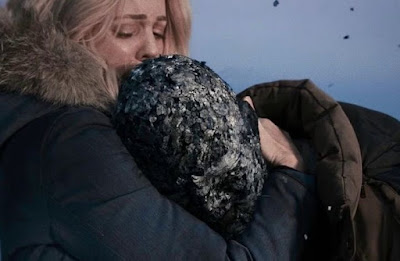 My love for 30 Days of Night knows no bounds, and I will go down swinging and screaming that this is still the scariest vampire movie in existence. Until the day comes when another movie dethrones this one, I'm here saying, “What a plague you are.”
Posted by Patrick Bromley at 5:00 AM