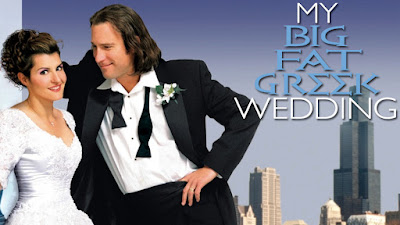 • Best Scene/Moment (tie): I’m not proud of this, but the running joke about Windex always makes me laugh as does the practical jokes Louis Mandylor and Joey Fatone pull on John Corbett.

• Best Merch: A “My Big Fat Greek Wedding In-Store Promotional Pin” for $4.25. It reads “It’s all Greek to me” and promotes the film’s home video release date. The seller says it’s in excellent condition and has never been worn, to which I say, “until I buy it.” 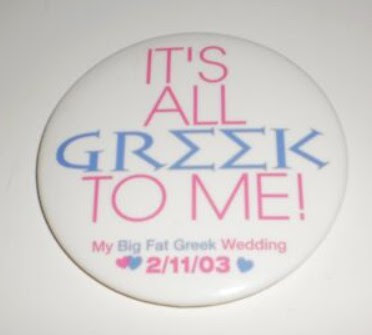 • Director Check: My Big Fat Greek Wedding was directed by television and theater veteran Joel Zwick. The film stars and was written by Nia Vardalos, so her stamp is more on the film than anyone, but Zwick knows exactly what he’s doing and maintains a fun-loving, heartful tone throughout. Zwick’s first feature was 1989’s Second Sight starring Bronson Pinchot and John Larroquette. I forced my dad to take me to see it in theaters and (as a running joke) he still reminds me of how much he hated that movie to this day. My Big Fat Greek Wedding was Zwick’s feature directorial effort followed by two films in 2004: Elvis Has Left the Building (which has John Corbett, how have I not seen this?) and, his most recent movie to-date, the live-action adaptation of Fat Albert starring Kenan Thompson. Joel Zwick’s television credits include Laverne & Shirley, Perfect Strangers, Full House, Family Matters, and many more. His most recent directing credit was on Netflix’s Full House reboot, Fuller House.

• Double It with This 2002 Movie: Maid in Manhattan 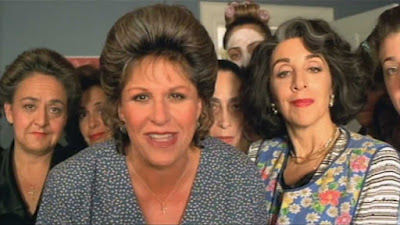 • Mall Movie? It wouldn’t start at the mall, but it would have eventually gotten to the mall deep into its run.

• Scene Stealer: Michael Constantine as Gus. He’s one of my all-time favorite movie characters. Every moment is perfect. Andrea Martin is also great.

• I Miss (tie): Michael Constantine and the era (era) where a movie like this could build word-of-mouth and become a breakout hit. Nowadays, something like this would get buried somewhere on streaming or VOD. 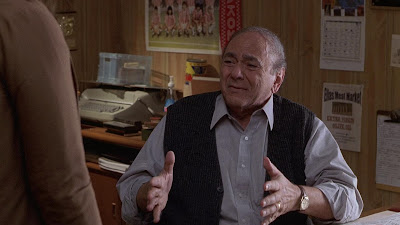 • I Don’t Miss: The My Big Fat Greek Wedding backlash. Like Dances with Wolves and The Blair Witch Project, it’s not the movie’s fault it struck a chord (winning Oscars, ushering in new subgenres, massive box office success) during its initial release. There might have been better movies more deserving of these films’ success but that doesn’t suddenly make something like My Big Fat Greek Wedding a bad movie.

• 2022 Crush: John Corbett. I’m jealous of his voice and that he looks like Tarzan in this movie.

• What I Thought in 2002: I loved My Big Fat Greek Wedding when it came out (I saw it at least 3 times in theaters, maybe 4?). It was a movie I shared with an ex-girlfriend during college, so it meant a lot to me at the time. I knew it was corny, but it made us feel great whenever I watched it. Cool story: there’s an old single-screen neighborhood theater nearby called The Catlow (which is where I saw it one of the times) that played My Big Fat Greek Wedding for 19 weeks and single-handedly saved the theater from having to be put up for sale.

• What I Think in 2022: I still adore the movie. It has a scrappy Second City vibe I can’t resist. I love how broad the comedy is and the performances are all funny and charming. I might be this movie’s biggest fan. I want to marry into a Greek family. I also can’t wait for the upcoming My Big Fat Greek Wedding 3, which will have my boy Corbett but sadly not the late, great Michael Constantine.
Posted by Patrick Bromley at 5:00 AM