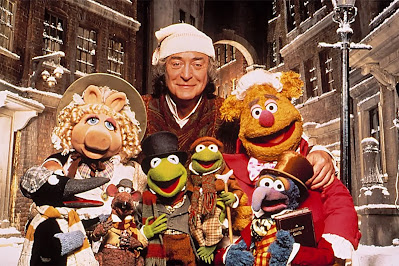 I used to love newspaper ads for movies around the holidays. Let’s revisit some! 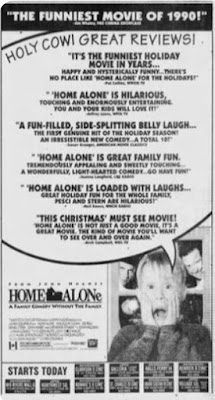 I think my favorite part of this ad is how dated “Holy Cow! Great Reviews!” is today. Does Macaulay Culkin ever say “Holy Cow” in Home Alone? Or were they thinking “We need to get it to seem like Bart Simpson is giving his tacit approval to Home Alone”? 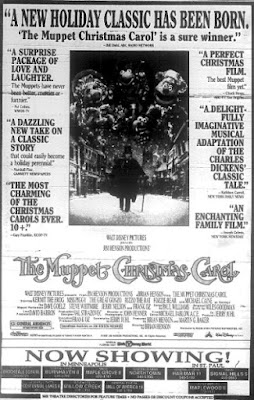 I like when quotes in these movie ads predicted something and it came true. Look here at Gannett Newspapers going out on a limb and saying The Muppet Christmas Carol could “…easily become a holiday perennial.” Nice job, Marshall Fine.

Jingle All the Way 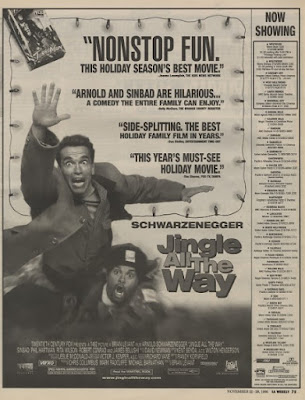 The Kids News Network called the race early and declared Jingle All the Way to be “Nonstop fun” (Adam checks notes, gives thumbs up) and “This Season’s Best Holiday Movie.” That’s some mighty shade being thrown at other releases at that time like Space Jam, 101 Dalmatians (kids hate Glenn Close), and Ransom (the kid gets returned so I thought KNN might have dug it). How does the Kids News Network work exactly? Are children anchors writing news stories?

Another big move was just randomly throwing holiday appropriate hats on movie characters like in this ad for Pulp Fiction during the Christmas holidays back in 1994. There was also a Thanksgiving ad (that I excluded because it’s offensive in 2022) but had a tagline saying, “This Thanksgiving Holiday, Feast on the Fiction!” It sounds like something I would have come up with. It’s so dumb. P.S. Did movie stars get paid extra for being subjected to silly holiday hats in newspaper ads for their films? 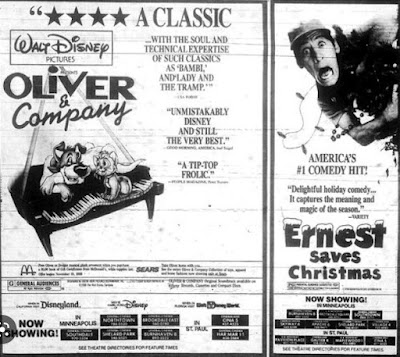 I remember this weekend vividly because it was an overload of kid-friendly options in theaters including two Disney releases – Oliver & Company and Ernest Saves Christmas. I like how the Oliver & Company ad has a quote that it’s “unmistakably Disney” (were they trying to hide it?) and a “tip-top frolic.” We need more tip-top frolics in theaters! I like the snow on the Ernest Saves Christmas title card. It’s class. The snow plays. 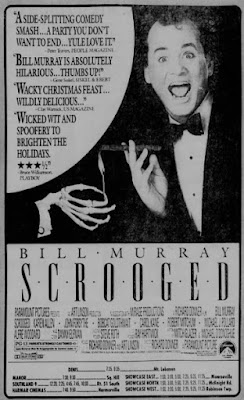 Sometimes these ads would have critical praise that was enough to twist my arm and want to see a movie in theaters. Look no further than this ad for Scrooged. People Magazine said “Yule love it” which I’m pretty sure was all I needed to hear at age 6. It’s just good, insightful criticism. 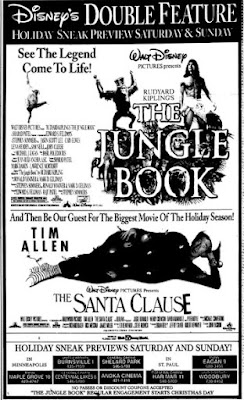 In the words of Brian De Palma, holy mackerel! Disney would occasionally do this where they’d drop a monster double feature on unsuspecting audiences, and this is one of their best. What a helluva afternoon! I also like how they would say “be our guest” for the second feature. It just sounds friendly. I wonder if an usher ever came in after the sneak preview and said “Sorry, do you have a ticket for The Santa Clause?” and someone replied “Oh, I’m their guest. Is there a problem?” 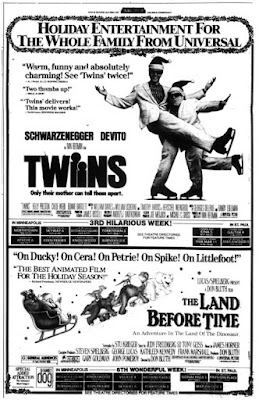 This ad from Universal is just out of control. Arnold Schwarzenegger and Danny DeVito are clearly on their holiday break already just dancing and yucking it up in Santa hats. I like how one critic says to see Twins twice, but nothing beats The Land Before Time suddenly becoming a Christmas classic with Santa using dinosaurs as reindeer and commanding “On Ducky! On Cera! On Petrie! On Spike! On Littlefoot!” I also really dig how they say Twins is on its 3rd hilarious week and The Land Before Time its 6th wonderful week. Who decides these adjectives?

Back to the Future Part II 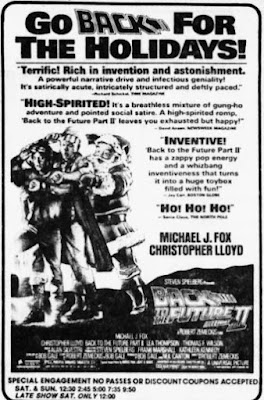 Let’s close with America’s toughest critic, the one who decides who’s naughty or nice, Santa Claus. First, he’s photobombing the ad and giving Doc Brown a back massage and second, he reviews the film just as “Ho! Ho! Ho!” which is better than the blurb from Newsweek that says the movie will leave you “...exhausted but happy.” Why would the studio have included that?
Posted by Patrick Bromley at 5:00 AM