The king is dead. Long live…

Black Panther: Wakanda Forever is not the film writer/director Ryan Coogler intended to make when he signed on for a sequel to his 2018 smash hit. It couldn’t possibly be. Chadwick Boseman’s tragic death midway through pre-production made it impossible to continue T’Challa’s story, that of a young monarch fighting to harmonize tradition and modernity, to atone for sins of the father and bring his proud but reclusive country into diplomatic maturity. Like Star Wars: The Rise of Skywalker before it, there’s a degree to which Wakanda Forever feels stillborn — it’s a consolation prize, the best Coogler and his team could produce under the circumstances. Electing not to recast their iconic lead character (maybe even learning from the disastrous reappropriation of Carrie Fisher footage in Skywalker), Coogler and Marvel chose instead to use T’Challa’s death as the emotional core of a new story, one in which his surviving family and countrymen struggle to defend a nation still grieving the loss of its most venerated champion. 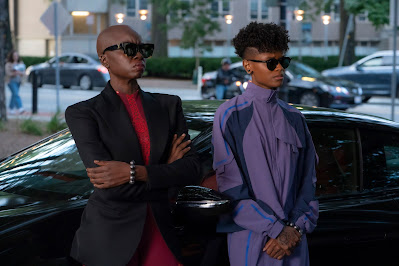 A year after T’Challa’s passing, Wakanda Forever opens with Okoye (Danai Gurira) and the Dora Milaje defending a Wakandan research facility from mercenaries tasked with stealing vibranium, a breach of international protocol that Queen Ramonda (Angela Bassett) lays at the feet of the United Nations. The world senses Wakanda’s weakness, she tells the other dignitaries, but her people will not hesitate to retaliate if challenged. Meanwhile, American scientists using vibranium detectors stumble upon an underwater nation called Talokan, provoking its ruler, the wing-footed, amphibious Namor (Tenoch Huerta), to reveal his vibranium-rich civilization to Ramonda and Princess Shuri (Letitia Wright). He begs them to find the creator of the detector and defend their peoples from those who would steal their shared resources. Eager for redemption after failing to save T’Challa, Shuri joins Okoye on her mission to recover wunderkind Riri Williams (Dominique Thorne) before Agent Ross’ (Martin Freeman) CIA finds her first.

Namor’s nationalism turns deadly, however, when Shuri refuses to hand Williams over to his execution squads. His warriors overwhelm Okoye (who is subsequently exiled for her failures) and kidnap the princess. Ramonda then enlists Nakia (Lupita Nyong’o) — who emigrated to Haiti after T’Challa’s death — to find Shuri, while Namor details the history of his ancient Mayan people and the oppression they faced at the hands of conquistadors. Talokan and Wakanda are of common cause, Namor explains to Shuri, but when Nakia absconds with his captives, he launches a brutal attack on the capital city that results in more royal fatalities and the retreat of Wakanda’s population into the Jabari tribeland ruled by M’Baku (Winston Duke). Unable to mount an effective defense without the Black Panther, Shuri sets about developing a synthetic substitute for the now-extinct heart-shaped flower that gave the fearsome warrior his power. As Namor sets the stage for a final showdown, a new face takes up the legendary mantle.

That’s a long story short, believe it or not, as Wakanda Forever is plottier than its predecessor — and, somehow, epics like Avengers: Endgame — by a country mile. And although the film retains Coogler’s stylish direction, Ruth Carter’s Oscar-winning costume design, Ludwig Göransson’s pulse-pounding score, and one of the most dynamic casts young Hollywood has to offer, this convolution results in a clunky and unwieldy mismatch of plotlines that fail to even approach the grandeur, spectacle, or philosophical complexity of the original. Wakanda Forever is constantly tripping over itself, interrupting character development and undercutting its thematic goals at every turn. Had Coogler and co-screenwriter Joe Robert Cole held close to the story’s initial shape — a wounded nation fighting off would-be scavengers with dignity and altruism while a sister culture urges them to strike with violence — they may not only have overcome the loss of their franchise icon, but thrived in (and because of) his absence.

Instead, Wakanda Forever gets lost in the weeds early on and never recovers. It’s great to see familiar faces like Lupita Nyong’o and Martin Freeman, but they have no place in this story, and their threadbare plotlines (including appearances from MCU TV’s Julia Louis-Dreyfus) further destabilize an already unfocused narrative to no measurable benefit. Most disastrous, though, is the full act devoted to supergenius Riri Williams. Dominique Thorne is pleasant enough in the role, but time devoted to her vibranium detector and Ironheart suit would have been better spent on Shuri’s — our alleged protagonist — emotional development or her unlikely commiseration with the brooding Namor. Esoteric works like Doctor Strange and the Multiverse of Madness may invite world-expanding crossover events, but Wakanda Forever is no place for a backdoor television pilot. A filmmaker of Coogler’s calibur should be exempt from this level of feckless studio interference. I want to believe there was nothing he could do about it.

Even with all that said, Wakanda Forever continues to make the argument for Ryan Coogler as one of our great populist auteurs, and its scattered moments of raw emotion — be they warm montages, gorgeous static compositions, or the simplest of offhand character beats — are all the more powerful because they are filmed through his lens. He finds the vulnerability in Letitia Wright’s eyes and gives Angela Bassett the space to command scenes with her staggering presence. His attention to repressed peoples and cultural exploitation continues (albeit to muddled effect) with Namor’s Talokan, and although nearly all of the film’s action sequences feel pre-visualized and perfunctory — especially a baffling shipboard fight between armies that don’t seem to be clear on their terms of engagement — they’re always executed with a joyful affect and palpable sense of potential. Coogler is an artist built for conscientious spectacle, a vestige of integrity and style who should free himself of the constrictions of the Marvel machine as soon as possible.
Posted by Patrick Bromley at 12:00 PM