Adam: It is occurring to me as I write about The Noel Diary that these holiday movie plots are getting insanely complicated. Justin Hartley of This is Us fame plays Jacob Turner, a writer whose mother (a hoarder) passes away and he returns home to clean out her home. While there, a woman named Rachel comes by and explains she is looking for her biological mother who was Jacob’s nanny when he was younger. I would go more into the plot, but Alison has a lot to say about some of the narrative choices and I will leave that to her.

What I found most interesting about The Noel Diary were the technical choices. On the positive side, most of these holiday movies have the technical sensibilities of a sitcom; there are aspects of The Noel Diary that feel more cinematic in terms of the shots and lighting used, and the problems come in when they try to do too much with it. Initially there are a few shots using an obvious blue filter in an attempt to make it look more cold and somber in the shots, they then continue to use it over, and over and over, and it feels like a good 80% of the movie is shot with a blue filter. Most jarring, though, is the postproduction slow motion. Avid movie watchers know what I’m talking about, but for those of you who don’t, “post production slow motion” is slow motion added in the editing room rather than while shooting. It has a very distinct look to it that is hard to describe. I do not know if they decided to use it in The Noel Diary as a point of emphasis or just to slow down an abrupt cut, but it is very noticeable, distracting, and used too much.

As I said earlier, The Noel Diary takes its time early on with character introduction and plot, then about halfway through begins to rush through things appearing like there were entire scenes or beats missing that would have better explain some of the characters' decisions. When the movie abruptly ends, I noticed the run time of roughly 105 minutes, which likely means this movie was originally edited or cut for television. There are some things to like in The Noel Diary, but not nearly enough for me to recommend this one. 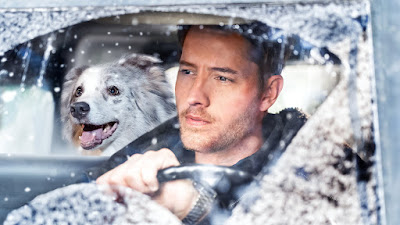 Alison: There is something happening with the more recent Christmas movies – probably because the basic plot lines have become so redundant – where they are branching out in terms of plot points and conflicts. The Noel Diary falls into this latter category. As mentioned earlier, we follow a writer who has an estranged relationship with his mother and has to confront the familial issues that he has been running from after her passing. The issues seem very real, with a mother whose mental health declined after a tragic event shattered the family and a father who left rather than bear that burden. I have to admire a Christmas movie that does not rely on saving a Christmas tree farm or the town’s pageant. As the movie progresses, we get more of a window into what is haunting Jacob Turner as he goes on the quest to help Rachel find her birth mother.

I was drawn to the story about Rachel and her birth mother. In my mind, I expected this to be the driving force for the movie with all plot points coming from her decisions surrounding finding her mother. In fact, for the first half of the movie, that is indeed what happens. We get some charming scenes of the two characters driving in Jacob’s WWII-inspired Jeep (don’t bring this up to Adam unless you want to see some inexplicable rage) and staying the night in a town a la Stars Hollow, complete with a beautiful Christmas market. At this point, I was set in my decision that this was going to be my new favorite holiday movie…until Jacob and Rachel retire for the evening – in separate rooms because as Jacob says to the clerk at the inn, “this isn’t a rom-com movie.” Jacob discovers that while unpacking his mother’s home, he unearths Rachel’s mother’s diary and he gives it to Rachel so she can read it. Instead of staying up all night read her mother’s diary (the entire point of the movie thus far and for which the movie is named), Rachel goes to the town’s book shop and purchases Jacob’s first book. This is what she reads all night. Jacob’s novel. Not her mother’s diary. The person who she is willing to travel miles into the New Hampshire woods in hopes of discovering some more clues to her whereabouts. Rachel has in her possession her mother’s intimate thoughts and feelings and decides that can wait. Jacob’s novel? A must read.

Everything after this point in the movie just, in my opinion, falls apart. The promising and unique plot becomes empty with characters making confusing decisions. We’ve said it before that in order to enjoy Christmas movies, one must suspend reality. We are asked to suspend reality a bit too much and it causes the movie to miss its mark. I applaud the writers for choosing some serious topics. I just wish they would have handled them with more care.

Side note: For any readers out there with young children, our nine year-old and six year-old want to recommend Netflix’s Christmas on Mistletoe Farm. The two of them watched it twice over the Thanksgiving weekend and giggled the whole time. While I can’t vouch for the movie, they at least get capture the charm of having Christmas on a farm (Christmas on the Farm, I’m looking at you!).