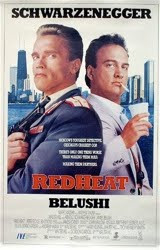 With The Other Guys now in theaters, it's time to F one of my favorite movie genres: the buddy cop movie. I'm gonna solve this case, if I don't kill each other first.

1. Lethal Weapon (1987) - The brass ring of buddy cop movies. Mel Gibson is crazy and wants his partner to blow him in the jacuzzi, but Danny Glover is too old for this shit. Two decreasingly decent sequels came after, followed by one barf fest called Lethal Weapon 4. They had to be making that one up as they went along.

3. Hollywood Homicide (2003) - Ron Shelton's least-respected movie isn't as bad as its reputation. I like that it's not really about anything; being cops is what the characters do to finance their real interests. I like it. F off.

4. Red Heat (1988) - You've got the best action star of the 1980s finally sharing the screen in a buddy cop movie. Who do you team him with? That's right. Jim Fucking Belushi. Walter Hill and Chicago and Schwarzenegger Danko make this worth watching. Jim Belushi makes it worth barfing. Actually, he's not that bad, as long as he's not losing money on Marvin Hagler.

5. Bad Boys II (2003) - The most socially irresponsible movie ever made is also the purest distillation of Michael Bay terribleness ever to hit the screen. The worst/best/worst. Like Will Smith says in that movie (every movie): "Aw, hell no."

6. Running Scared (1986) - One of the best buddy cop movies ever made actually makes an action hero out of Billy Crystal. Great Chicago photography, an awesome chase scene and the best use of "Sweet Freedom" ever.

7. Nighthawks (1981) - Before teaming up with Gabriel Cash, Stallone played buddy cop with Lando Calrissian in this gritty, cool early '80s flick. Just don't read the plot summary on Wikipedia, which is the most overly-convoluted piece of writing since Southland Tales.

8. Cop Out (2010) - Kevin Smith directs a script he didn't write, because directing is what Kevin Smith is best at. A lame tribute to '80s buddy cop movies (but with an awesome Harold Faltermeyer score) that's so slavishly imitative it begs the question: why not just watch Tango & Cash?

9. Showdown in Little Tokyo (1991) - Dolph Lundgren, Brandon Lee and Tia Carrere's body double team up to fight crime on HBO. This is probably Brandon Lee's best movie, mostly because he managed to avoid being killed during production.

10. Hot Fuzz (2007) - Edgar Wright has made two perfect movies and one perfect TV show. Like Shaun of the Dead, Hot Fuzz improves with repeat viewings, when you're able to absorb just how dense and well-structured the movie is. One of the few movies that's able to pull off the trick of making fun of something while still being that thing. F! This movie!
Posted by Patrick Bromley at 3:31 PM