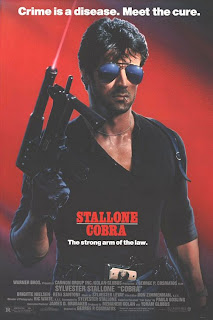 In honor of The Expendables hitting theaters this week, let's F the F out of these Sylvester Stallone movies. No Rockys or Rambos allowed.

2. Cop Land (1997) - James Mangold's Cop Land was a big deal because it was a low-budget indie in which Stallone took a dramatic role. I guess everyone forgot Rocky.

3. Cobra (1986) - Stallone is Marion "Cobra" Cobretti. Read that again. Crime is the disease, and he is the cure. If you've got a meathook handy, he'll hang you on it. This is Stallone's Raw Deal.

4. Judge Dredd (1995) - This comes from the period where not many comic book movies were being made because no one knew how to make them. Casting Rob Schneider as the comic sidekick to the ultimate badass is not a good start. Not horrible, but messy and ugly and not great.

5. Oscar (1991) - John Landis's tribute to the screwball comedies of the 1930s is very on the nose and very underrated. Stallone isn't exactly hilarious (he's not bad, either), but everyone around him is. Much better than people are willing to admit.

7. Cliffhanger (1993) - When Cliffhanger screened in 1993, it was kind of awesome because it was in 70mm and was the first watchable Stallone movie in a few years. When Cliffhanger came out on video and was suddenly about dialogue and performance instead of cool 70mm mountain scenery, it was not awesome. Features one of the wordiest and most awkward bad-guy-death kiss-off lines in history.

8. Assassins (1995) - A Stallone movie from the period where his movies were bad in a way that inspired pained indifference (we'll call them "the Specialist years"). The pre-Matrix Wachowski siblings wrote the script, Joel Silver produced and Richard Donner directed. Why is it so lame? If nothing else, the movie offers the chance to see Stallone act opposite the always awesome Amber Waves, playing a character named Electra. Barf.