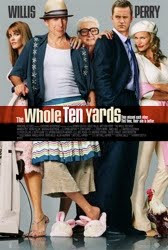 By design, almost all sequels are unnecessary and are just cynical attempts to repeat past successes and make more money. Because capitalism and America is the best country that God has given Man on the face of the Earth. That doesn't mean that all sequels are bad, or that some (Spider-Man 2) aren't superior to their predecessors. Let's F some sequels that aren't necessarily horrible but which have no justifiable reason for being.

1. Another Stakeout (1993) - The textbook definition of unnecessary sequel. Stakeout is a fine movie, but no one who happened to catch it on HBO one night (because that's the only way anyone has ever seen Stakeout) ever thought "I would like to know that happens to these characters next. And I would like Rosie O'Donnell to participate."

2. Basic Instinct 2 (2006) - Weird. This terrible sequel to a terrible movie made it seem like Sharon Stone might be desperate and sexually unappealing. That can't be right.

3. The Rage: Carrie 2 (1999) - Not a bad movie, just a pointless one. If it were five years later, they would have called this a remake or, even barfier, a "re-imagining" of Brian DePalama's original. Imagine Carrie, only worse. Plus, that title should have tampons thrown at it. The only connection to the original movie is the presence of Amy Irving. Sue Snell deserves better than a fire poker through the head. Go fuck yourself, Carrie 2.

4. Book of Shadows: Blair Witch 2 (2000) - There really was no way to make this work, and they shouldn't have tried. I get why a studio would want a sequel to 1999's $100+ grossing Blair Witch Project. I even appreciate that documentary director Joe Berlinger wanted to do something different, because there really was no way to repeat what worked about Blair Witch. It was the choice to make movie barf that I couldn't get behind.

5. The Sting II (1983) - Paul Newman and Robert Redford and Robert Shaw and George Roy Hill had nothing to do with making The Sting a success. It was the words "The Sting."

6. The Whole Ten Yards (2004) - I actually liked The Whole Nine Yards, and even I wasn't looking for a sequel. Luckily, everything about it is the worst.

9. Weekend at Bernie's II (1993) - You might think that Weekend at Bernie's already stretched a thin, one-joke premise to its breaking point. You would be wrong, because there was still a whole voodoo plot to explore. "Don't you think there's still some magic left in this formula?" said Terry Kiser.

Posted by Patrick Bromley at 6:56 AM