Thanksf'ing #4: Five Movies for Which Mark Ahn is Thankful 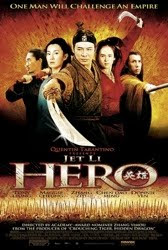 Next up for Thanksf'ing is a list from Mark Ahn:

1. Charade - A basketful of awesome elements I never thought would combine: Audrey Hepburn, Cary Grant, Stanley Donen directing, Peter Stone's writing, wit, mystery, suspense, Paris. I don't think I quite appreciated "older" films until I came across this one, and it opened up an entire universe of film that I had never considered watching. With a $100 Blockbuster gift card, I decided to try and conquer it. Charade is also memorable in my own life as the movie with which I browbeat a department chair during an interview, after he mentioned that he taught film. "Oh, have you seen Charade?" I asked. "No, never heard of it." Rant on. Apparently, I love this film enough to not accept potential employment. Some things, like stupidity, are not negotiable.

2. Hero - Zhang Yimou's beautifully textured, multiple perspective showpiece captured my attention, despite the fact that I watched it first without English subtitles, which made things...complicated. I was thankful that the weight of the scale they depicted felt more real than in other epics of the same magnitude. A cloud of arrows never looked so menacing, nor did swordplay ever look so graceful, nor the power of a word so uniquely presented.

3. Hard Boiled - You ever think that 10,000 bullets would be enough for one 15-minute gunfight? I never thought so either, until three guys jumped around in a tiny room shooting at each other from impossible angles. I miss the John Woo who still had his fastball, because he created the best, fluid, kinetic gun-fu that ever unloaded a clip in slow motion. It's the John Woo who had characters solve difficult problems with wit, style and guts, before everything became a messy charicature covered in doves flying out of fire. That's right; fire doves.

4. Fight Club - The work that made David Fincher and Chuck Pahlaniuk the Ayn Rands of their generation, because, much like The Fountainhead, so many people who watch or read Fight Club swear to its veracity, probably because so few of who watched (and enjoyed) it could ever act out the freedom they saw on screen. There are certainly other films that are more controversial, or grittier, or more thoughtfully postmodern (or whatever), but I don't think I find those as rewatchable.

5. Memento - The most impressive thing about this Christopher Nolan movie is that it taught me, film lover but technical novice, about how the structure of the medium could manipulate audience perception. Either I was too stupid to notice other films which had done it before, or I needed to see an extreme example, like the anterograde amnesia of the main character, to understand it. It was another upshift in my love of suspense movies, like a twist to the twist.

Got a movie or movies you're thankful for? Email us at fthismoviepodcast(at)gmail.com and share. We'll be reading submissions on the podcast all month long. Happy Thanksf'ing!
Posted by Patrick Bromley at 9:30 AM