Thanksf'ing #7: Ten Movies for Which Patrick is Thankful 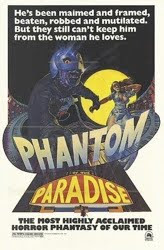 1. Bird on a Wire (1990) - The first movie I ever got to go see by myself. When I was 13, my mom finally let me walk to the second-run movie theater down the street and see this alone on a Saturday afternoon, beginning a habit that would last me my whole life. From then on, every Saturday was spent at the movies, where I could get one admission, a Cherry Coke and a box of Sprees for under $4. It didn't matter what the movie was; as long as I could get in (read: it wasn't rated R), I was there. I saw a lot of terrible films that way, but I didn't care. I was at the movies. And all because my mom let me go see an utterly forgettable Mel Gibson/Goldie Hawn vehicle. Thanks, mum.

2. There's Something About Mary (1998) - Not just my favorite movie of 1998 (suck it, Shakespeare in Love and Saving Private Sticky Bombs), but one of the best romantic comedies of the last 20 years -- a familiar story told with tremendous originality and incredible comic momentum. Plus, the tale of a geeky guy who eventually finds love with his beautiful, impossibly-out-of-his-league best friend is a lot like my own story with my wife -- only with way more cum-in-the-hair jokes -- and is, at least, partially responsible for us getting together. That's a lot to be thankful for.

3. Matinee (1993) - Sometimes, it feels like a filmmaker is looking inside your head and making movies just for you. Joe Dante does that a lot for me, but never more than in Matinee. All of my favorite movies are ones with which I have a deeply personal relationship, and few movies are more personal or dear to me than this. Also, MANT.

4. Phantom of the Paradise (1974) - Brian DePalma is one of my favorite directors, and though he's made better movies (they were called Blow Out), none of them make me as happy as this one. He was doing genre mash-ups before they were cool. Plus, it's got great songs by Paul Williams and Jessica Harper doing the Jessica Harper dance.

6. The Wizard of Oz (1939) - The film that taught me that some movies are special events, worth waiting an entire year for and capable of bringing everyone together; we may not have been in the same room or even the same house, but everyone watched The Wizard of Oz when it used to air only once a year on CBS. Not just one of the best movies ever made, but one of the best things ever made, affecting me the same today as it did when I was six. Every aspect of it is perfect.

7. Beauty and the Beast (La belle et la bête) (1946) - A person's favorite movies can tell you a lot about him or her, and my favorite movies -- the ones that are the most personal to me -- paint a pretty clear picture of who I am. It's easy to look at La belle et la bête (if you'll pardon my douche) as an early incarnation of a lot of the movies on this list; alongside The Wizard of Oz, Jean Cocteau's gorgeous and bitterly funny fairy tale is pretty much the template for the kinds of fantastic, imaginative movies I would come to love throughout my life. It is both completely magical (if you'll pardon my barf) and incredibly subversive. Kind of like Mrs. Doubtfire.

9. The Princess Bride (1987) - One of a few movies that taught me not to judge a book by its cover (if you'll pardon my trite-and-overused-expression-when-really-I-mean-not-judge-a-movie-by-its-title-or-poster-or-ad-campaign). I didn't have any interest in The Princess Bride in 1987, but it was playing down the street from my house and was rated PG so I went (see: Bird on a Wire; in those days, I could walk to the theater with a friend). It immediately became one of my favorite movies (it no longer is, though I still think it's great) and made me thankful that I had taken a chance on it. See also: Ghost, The Accidental Tourist, Shut Up and Sing, Romancing the Stone

10. Joe Versus the Volcano (1990) - I recently came across an internet forum discussion about this movie, and everyone participating was either dismissing it outright or saying that the few parts that worked couldn't stop it from being altogether forgettable. All of those people are totally fucking wrong. This is a beautiful, original, heartfelt movie that isn't ashamed to celebrate being a movie. There is so much going on here -- so many great characters and performances and poetry in both the dialogue and the visuals -- that I'm endlessly protective of it and won't suffer foolish criticism lightly. Some movies are special because we take ownership over them. I don't mind that people don't like Joe Versus the Volcano (even though they're stupid and wrong), because that just leaves more for me. I love this movie.

Got a movie or movies you're thankful for? Email us at fthismoviepodcast(at)gmail.com and share. We'll be reading submissions on the podcast all month long. Happy Thanksf'ing!
Posted by Patrick Bromley at 3:50 PM