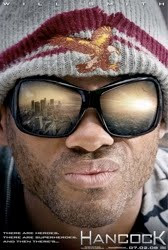 Webster's Dictionary defines a "Hancock" as a movie in which there are a lot of good ideas or stuff that works, but which either drastically shifts gears and becomes a different movie or fails to deliver on its potential. More often than not, Hancocks amount to ambitious failures, but that doesn't meant that all Hancocks are bad movies (I tend to like them). Let's f some Hancocks because it's made up and we want it to catch on.

1. Hancock (2008) - The movie that gives the Hancock its name takes a terrific premise -- a superhero is a drunken mess who hates all of mankind (and they hate him right back), so he hires an ad man to rehab his image -- and only spends half the movie on it. That half of the movie is pretty good. Then, things turn pretty terrible as a whole mythology is introduced and Hancock becomes something very, very different. It's a wild clash in tone that feels like a major missed opportunity to subvert the superhero genre in a new way. Incredibly, it still made a ton of money, because Will Smith + summer = Aww, hell no.

2. Southland Tales (2007) - In just three movies, Richard Kelly may have already won himself the title of King of the Ambitious Failure. Southland Tales remains his messiest (and most misunderstood) movie -- an alternately crazy and pretentious mixture of science fiction, political satire, religious allegory and broad comedy (there are a bunch of former Saturday Night Live stars in the cast, because why not?). I happen to love it, but even I recognize that for everything Kelly does right (like an awesome Justin Timberlake musical sequence), there are two or three things that could be seen as terrible. Pimps don't commit suicide.

3. Full Metal Jacket (1987) - I know. Blasphemy. And, yet, it's almost accepted gospel now that the first half of Stanley Kubrick's let's-make-a-Viet-Nam-movie-in-British-factories war epic is awesome and that the second half is a mess. The movie (which I've only come to love in recent years; it's now one of my favorite war movies, if not my favorite) is less ambitious failure than just plain uneven, but, like Hancock, it's two movies and one is clearly better.

4. Knowing (2009) - In so many ways, this sci-fi thriller from Dark City director Alex Proyas requires a huge leap of faith from the viewer. Literally. There are some incredible set pieces and a great batshit Nic Cage performance, but that last act is sure to split audiences and turn a lot of people off. Like, in an "I hate this" way.

5. The Village (2004) - The first M. Night Shyamalan movie that audiences rejected outright isn't completely terrible (though he would get there soon enough), but it's not the movie we were promised in the trailers. I wanted to see that movie, but "Night" couldn't resist the urge to turn everything upside down with an awful twist ending that nullified everything that had worked to that point. That's what people went to his movies for, right? The man has been drowning in flop sweat ever since.

6. Dune (1984) - Having never read the Frank Herbert novel upon which David Lynch's Dune is based, I have very little idea what the fuck is going on in this movie. That doesn't mean I can't enjoy the incredible production design, the Toto score, the supporting cast of Lynch regulars and at least parts of the story (read: sandworms). Like a lot of David Lynch movies, you know you're seeing something, even if you're not exactly sure what that might be. Also, this is the movie Lynch chose to make instead of Return of the Jedi. Let that blow your mind grapes.

7. 1941 (1979) - Steven Spielberg decided to cash in all his Jaws and Close Encounters goodwill with this sprawling, two-and-a-half hour slapstick comedy set during WWII. There's a lot in the movie that actually is funny, but the whole thing pretty much defines bloated and self-indulgent.

8. Mr. Brooks (2007) - A total Hancock. On the one hand, there's a fascinating black comedy about uptight, compulsive serial killer Kevin Costner and his imaginary friend William Hurt. On the other, there's an incredibly shitty and formulaic cop subplot with Demi Moore. On a third hand (because three hands), there's Dane Cook being blugeoned with a shovel. Lots to like here, but also lots of barf.

9. Lifeforce (1985) - I'm of the mind that Tobe Hooper's sci-fi horror opus (originally called Space Vampires, because space vampires) still works, but I'm probably just being an apologist for a movie that's a crazy mix of space, vampires, space vampires, the destruction of London and a lot of naked Mathilda May.

10. The Brothers Grimm (2005) - Poor Terry Gilliam. He hasn't had the best luck over the last decade, what with his inability to get Don Quixote off the ground, the disaster that was Tideland and the death of his lead actor before he could finish The Imaginarium of Dr. Parnassus. Any of those movies could be on this list, but Brothers Grimm stood the best chance at commercial success (what with the casting of Matt Damon and Heath Ledger in the leads) -- that is, until Gilliam began working from a script by Ehren "Reindeer Games" Kreuger and at the notoriously edit-happy Mirimax. The studio basically took Gilliam's movie away and released something very different than what he had intended. The result is an incredible mess, but one with a good idea at the center (the Brothers Grimm are con artists who encounter real-life fairy tale creatures) and is still totally worth seeing, terrible special effects and all.
Posted by Patrick Bromley at 9:53 PM