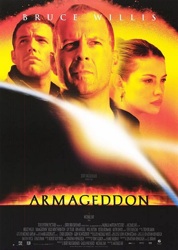 F Heads! Today marks the first entry in our new Director Essentials series, in which we pick the essential movies in a single director's filmography. What better way to kick this feature off than with Michael Bay, who is the worst. Thanks to F Head Steve I. for the nomination. We call your bluff, sir.

If you've got a director you want to nominate for Director Essentials, nominate him or her (because women can do anything boys can do if they put their minds to it) on our Facebook page or in the comments below.

1. The Rock (1996) - Michael Bay has never actually made a "good" movie, but this one comes closest. Once upon a time, Nicolas Cage was a surprising and exciting choice to play an action hero.

2. Armageddon (1998) -Still Bay's most commercial movie, and (incredibly, amazingly, barfingly) one of his best. It's funny to go back and watch Armageddon now and realize that for a Michael Bay movie, it's actually kind of classy.

3. Bad Boys II (2003) - This is who Michael Bay really is: bloated, cocky, misogynistic, homophobic, kind of racist, violent, vulgar and self-satisfied. It's hard to imagine Bad Boys II as a "personal" film, but this represents Bay the same way that Vertigo represents Hitchcock.

4. The Island (2005) - Not a good movie, but the only entry in Bay's filmography that's at all interesting if only because he's actually attempting to stretch and do something different. He was punished for it, of course, with bad reviews and tepid box office (for a Bay movie, at least). The sting of The Island's failure led directly to Transformers, so fuck us.

5. Transformers (2007) - The Transformers series are the movies for which Michael Bay will be probably be remembered. He deserves that. So do we. People that love these movies are the worst.
Posted by Patrick Bromley at 11:11 AM