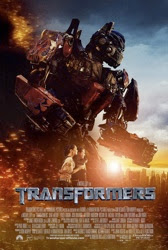 I didn't like Michael Bay's Transformers when I saw it on opening night back in 2007. I thought it was noisy and busy and silly and condescending, and that it turned what might have been a movie about giant robots from outer space engaged in an epic battle into a movie about giant robots from outer space hiding in the backyard. By the very next day, though, I was told how wrong I was by just about every person who had seen it. Everyone liked this movie -- at the time, anyway -- and the insane box office (and the fact that there have been two sequels) reflects that: the movie grossed over $700 million worldwide. The more people told me how much they enjoyed it, the more I got to thinking about how much I didn't enjoy it, and, as is my way, I dug my heels in even deeper and started to shit-talk the movie as much as possible. But now, with four years behind me and just a few days away from the release of Transformers: Dark of the Moon, I got to thinking maybe I was just being too hard on Transformers. Maybe I needed to see it again to appreciate the movie it is and not the one I was thinking it would be. Maybe it's more epic and exciting than I remember. Maybe, as summer blockbusters go, Transformers isn't half bad.

Nope. I was right. This fucking movie is horrible.

To be fair, I don't really have any affection for the Transformers, despite being a child of the '80s. Sure, I watched the cartoon and played with the toys and checked out the original animated Transformers: The Movie from the library every time it was in, because I had the Touch I had the Power. Also, I couldn't believe that some of the Transformers died and that Optimus Prime said "dammit," although, to be fair, he was attempting to open the Matrix of Leadership at the time and it wasn't opening. I would have said the same thing, I think. But I wasn't really clamoring to see a big-screen adaptation of the cartoon (though F This Movie!'s own Doug was finally vindicated, as he had been suggesting they make a live action Transformers for years), even if it was directed by Michael Bay. I've grown increasingly impatient with Michael Bay over his career, because every movie he makes is worse than the one that came before it. That's hard to believe, because he's made three movies since Bad Boys II, but I'm not going to argue with science. Every movie he makes is his latest worst movie.

I've said before that, on paper, Michael Bay seems like the perfect guy to make a Transformers movie. He's big on photographing cars and destruction, he's proven he can handle big effects sequences and some people even like the way he shoots action (even though it's all cut up and has no sense of pacing or geography, but some people also eat at Long John Silver's, so, you know, the world is a rainbow). He'd rather stage iconography than scenes. Most of his films have had the depth of a children's cartoon. And, since this one was produced by Steven Spielberg, it seemed like there would finally be a little moviemaking angel on Bay's douchey devil shoulder -- someone with a sense of pacing and characterization and an expert ability to tell a story. Someone to tell him to hold a shot longer than four seconds and to add a young black girl that does gymnastics somewhere into the movie.

Unfortunately, even the contributions that appear to be Spielberg's don't really work. I get the sense that a lot of the stuff in which Sam Witwicky (because that's the name of Shia Labeouf's character in this multi-billion dollar franchise) first interacts with the Autobots comes out of Spielberg's notes. A lot of it has that "I just met aliens from outer space and I live in the suburbs" vibe that he more or less invented. And I think the central relationship between Sam and Bumblebee is Spielberg, too. I get it in theory -- that it's about the special relationship a boy has with his first car, especially when that car is an alien robot and is constantly trying to get you some pussy. But even that doesn't work, because Bay doesn't have the patience to develop a relationship. He just wants jokes about songs that are playing on the radio and robots going pee on the guy who stole Miller's Crossing.

For a Michael Bay movie, Transformers is surprisingly light on action: there's a robot attack that opens the movie, another robot attack in the desert about an hour in, and then the last 20 minute battle. The rest of the movie is made up of people talking and Anthony Anderson eating all of the donuts and soldiers wishing they could go home to see their babies and Optimus Prime making speeches about mankind and robots asking about eBay listing (a robot from outer space DEMANDS TO KNOW ABOUT AN eBAY LISTING) and robots hiding behind trees in the front yard so that Shia Labeouf's parents don't see them.

That part confused me, though, because the whole thing about Transformers is that they are robots that transform into cars and stuff. They're robots in disguise. But instead of transforming into cars and hiding that way, they just crouch down behind trees. I understand that it would be a hard thing to explain if Shia Labeouf's parents were all like "What are all these expensive sports cars and flame-painted semi trailers doing on our front lawn?" But it would probably be easier to explain that than to explain why there are giant robots from outer space hiding behind trees. I guess I can't say for sure, though, because we didn't have that many trees in our yard growing up. Also, my parents got divorced.

The worst thing about Transformers, though, is just how condescending it is. Michael Bay always seems to underestimate his audience's intelligence, and the audience keeps surprising him by lowering the bar and enjoying the movies at his awful level. I guess he thinks that for everyone to enjoy the movie, they have to be "laughing" at all times, which would explain all the loud, horrible "humor" he shoehorns in that undercuts any possible coolness the movie might otherwise achieve. I get that it might be asking a bit much for a Transformers movie to take itself totally seriously, because no matter what it will still have that credit at the beginning that says "based on the Hasbro toy" to remind us how fucking stupid this thing that we are watching actually is. But when Transformers actually does take itself seriously, it's not the worst. The very first robot attack actually feels kind of intense and scary, because Bay shoots it like an alien attack and none of the robots have peed on anyone yet. It's hard to make them scary after they pee on John Turturro. They quickly become kind of a joke, though, and even they aren't it doesn't matter because there's really not a single human actor on screen who isn't just screaming and shouting and mugging for laughs whenever possible. And, yes, the movie is racist and sexist, but it comes from Michael Bay. I don't need to point out that a Brian De Palma movie owes a little something something to Alfred Hitchcock. We all go into it assuming that's the case.

I've seen Super 8 a couple of times now, and while I understand that not everyone likes that movie as much as I do (or cries through the whole thing, because I am a mess), I at least think we can mostly agree that it's an entertaining, crowd-pleasing movie with very good performances from the child actors. It's a reminder that summer movies don't need to be idiotic and can entertain the widest possible audience while still having the potential to make a very personal connection with some viewers. Is anyone making a personal connection with Transformers? That's not even a rhetorical question. The movies I love are the ones that speak to me and that feel special and memorable. I legitimately can't imagine anyone describing Transformers in that way. You can say it was fun and you were entertained by it (even though you and I differ on what we consider entertaining), but don't tell me you will ever have a relationship with that movie the way that we who love movies connect with our favorites. It's just not possible.

Speaking of which, if you're going to accuse me of being a snob or that I should just "turn off my brain and enjoy the ride," please go and fuck yourself. That's not why I go to movies. I can't have fun when my brain is turned off. I use my brain to have fun. If I don't have my brain on, what fucking part of my body is having fun?

So Transformers is still terrible, and I hated it enough that I skipped the sequel completely when it made billions of dollars in the theaters, which is good because even those apologists who liked the first movie all agreed that the sequel was one of the worst big-budget movies ever made. I caught up with it on Blu-ray later, and it definitely is worse than Transformers. I so wish I was a better man, because if I were I would see the trailers for Transformers: Dark of the Moon with all the cool music and shots of Chicago being destroyed and Shia Witwicky screaming "Optimuuuus!!" and know that it's going to be the worst and I can just go see Super 8 again instead. I wish that.

Because I watch that trailer and I know I'm going to see the shit out of that movie.
Posted by Patrick Bromley at 11:32 PM