Sh!#ting on the Classics: Fantasia 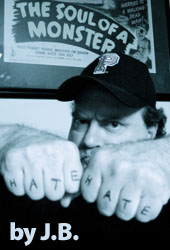 Has anyone in the last thirty years ever sat through this damn thing all the way through?  I can see why it was such a hit with college crowds in its late sixties rerelease-- you have to be chemically altered to get through it. 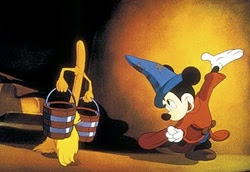 It is not that I need some sort of story, a narrative to carry me through a movie. I love omnibus films.  Let me list the ones I love: If I Had A Million, Dead of Night, Creepshow, Spirits of the Dead, Allegro Non Troppo, the second half of Twilight Zone: The Movie, and at least 50% of Four Rooms.

The pretension and condescension in almost every frame of Fantasia are astounding. Proof that Disney was worried about losing people with his first foray into high brows -- the film starts with an endless introduction that merely EXPLAINS WHAT THE FUCK IT IS. It is over seven minutes long and feels like thirty. Here’s an idea, “We made some boring cartoons to accompany classical music.  Go!”

This introduction is provided by “just plain folks” musicologist Deems Taylor, the film’s chief liability.  After each animated segment he reappears to laboriously explain what we are about to see in the greatest detail.  It is the definition of tedium.  I wonder if Walt Disney figured that every minute (that feels like an hour) of Deems Taylor was a one less minute of expensive animation.

Speaking of Disney, it is at this juncture in his career that he becomes famous for stealing credit from the artists in his employ.  You could invent a new drinking game for this film -- every time Taylor mentions “Walt Disney” or "the Disney Studios," drink a shot. They will be pumping your stomach in the emergency room by the time the “Rite of Spring” segment hits the screen.

Every segment is repetitive. Every segment is a snooze. I am convinced the popular Mickey Mouse and Ostrich Ballet sequences are only celebrated because they are surrounded by such abject tedium, but they too are tedious in and of themselves.

Full disclosure:  I actually like the “Night on Bald Mountain” sequence. It is scary-licious, it features the great creature Chernabog, and it shows titty. Although previous segments involving fairies and centaurs flirt with T&A, only the degraded sinners in the final segment are allowed to show, albeit briefly, everything God has given them.

Oddly enough, I feel many people kowtow to this film’s reputation as a masterpiece and either have not seen it or do not wish to announce that this particular emperor is naked.

However, JoshyR on the Internet Movie Database opines, “I like to watch this film repeatedly; often times I'll just close my eyes and daydream, letting my own imagination go in place of what’s on the screen.”  Folks, is that not the highest praise that any film could ever earn?  I love this film so much, it puts me to sleep and allows me to dream of a better film. High praise, indeed. Some nights I go to sleep and pray that God will make me just a little more like JoshyR.

Better yet: If'n you ever get a hankerin' to watch Fantasia again, try one of these three films instead: 1.  Pinocchio, the best the Disney animators ever got, nice message for the kiddies about listening to Dad, and a way cool were-Donkey transformation that is right out of a Universal horror film. 2. Allegro Non Troppo, Bruno Bozetto's seldom screened parody/homage to Fantasia. 3. Fantasia 2000. By the turn of the new millennium, Deems Taylor had passed, so it was safe to try it again. The Al Hirschfield-inspired "Rhapsody in Blue" segment is particularly well done.
Posted by Patrick Bromley at 12:07 AM