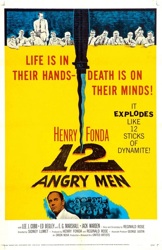 F This Movie! regular JB is taking over Director Essentials today to discuss the essential films of Sidney Lumet, suggested to us by reader Wade Glenn. Also by Sidney Lumet dying. Read JB's thoughts after the jump.

And, as always, you can nominate directors you'd like to see covered on our Facebook page or in the comments below.

I am sad because Sidney Lumet died this past weekend. He was one of my favorite directors, and I always wondered why he did not receive the accolades and acclaim of some of his contemporaries. Look at the man's body of work in a career that spanned over fifty years.

1. Twelve Angry Men (1958) - A jury decides the fate of a young man in Lumet's directing debut, one of the most impressive in movie history. I wrote about the film last Thanksgiving when all of us at F This Movie! made lists of films for which we were thankful. Whenever it shows up on TCM (and it shows up a lot) I am forced to drop whatever I am doing and watch it. Damn you, TCM! This is a singularly American film, both profound and timeless. Lumet faces the challenges of a single set admirably; it is never just a photographed stage play. In his autobiography, Making Movies, Lumet talks about how he subtly changes lenses and angles as the film goes on for effect. This ensemble of actors was never better. In fact, Lumet would come to be known as an "actor's director;" he went on to shepherd seventeen performers to an Oscar nomination.

2. The Pawnbroker (1964) - The title character battles thoughts of his past in this perennial favorite in films studies classes because of its then-groundbreaking use of subliminal cuts. Make no mistake -- this film is about much more than just editing tricks. This is a film about memory, and Lumet's direction is reserved yet thoughtful. Rod Steiger gives what I consider to be the performance of his career as Sol Nazerman, a Holocaust survivor. It is certainly one of the bleakest films ever made.

3. Dog Day Afternoon (1975) - A bank robbery goes horribly wrong, and Lumet provides yet more proof that we are marching backward, ever backward, in the evolution of film. I am referring here to the way the relationship between Al Pacino and Chris Sarandon is portrayed. In the words of both James L. Brooks and John Carpenter, "I don't think they would let you do that anymore." Based on a true story.

4. Network (1976) - A network news anchorman has a nervous breakdown in this film that sent ripples through the popular culture wading pool that have not yet abated. The film that predicted the rise of reality TV. The film that gave us "I'm mad as hell, and I'm not going to take it anymore!" The film that gifted Beatrice Straight with an Academy Award for a ten minute-long performance. The film that also contains one of the funniest sex scenes of all time.

5. Before the Devil Knows You're Dead (2007) - Two sons decide to rob their parents' jewelry store, and Lumet gives Quentin Tarantino a run for his money in the "Let's Play with Chronology" sweepstakes. The film features a typically excellent performance from Philip Seymour Hoffman; an exceptional, sad and honest performance by Ethan Hawke; and one of the most raw and painful performances I have ever seen by Albert Finney.

Re-reading the above, I hope I have captured some of the remarkable talent of this remarkable director. You know a director's career is impressive when the films left off the list are Fail Safe, Serpico, Murder on the Orient Express, Prince of the City and The Verdict! His films all have a distinctive tone and a distinctive vision. Perhaps even more impressive -- these bleak and gritty films never offer fake Hollywood uplift and sentiment as a solution to their problems. Lumet gives us credit, lets us decide for ourselves that our lives will be better to the extent that we avoid acting like his flawed, unlucky protagonists. It is a lesson in melodrama that current films desperately need.
Posted by Patrick Bromley at 10:02 AM