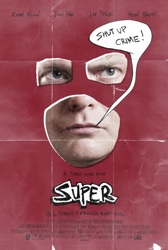 If you're going to see writer/director James Gunn's newest film Super -- and you really, really should see Super -- do yourself a favor and don't read Roger Ebert's review in which he casually spoils part of the movie's climax in the opening paragraph. If you are going to read it at all (and I love Roger Ebert, but I'm not so sure you need to), only do it after you've seen the movie so you can understand just how wrong he gets it. He awarded the movie only two stars and spends most of his review complaining about the mix in tones -- the way that the black comedy mixes with real pain (both physical and, even more so, emotional) and brutal violence. He didn't like the way Super made him feel, and failed to understand that it's exactly what the movie has in mind.

Of course, if the audience with whom I saw the movie was any indication, Roger's not alone. There was uncomfortable and inappropriate laughter all over the film as it played, even in those moments that aren't going for comedy. It's as though audiences these days can't handle a movie that's more than one thing; when it's funny in the first few minutes, they're not prepared to shift gears when the movie does the same. And boy does Super shift gears. A lot.

Rainn Wilson stars as Frank D'arbo, a schlubby but genuinely decent short-order cook married to recovering drug addict Liv Tyler. When she starts using again and leaves Frank for a slick criminal named Jacques (which Frank spells as "Jock"; at any rate, he's played with great James Woodsian energy by Kevin Bacon), Frank has what can only be described as a psychotic break: touched by the finger of God (voiced by none other than Rob Zombie) and inspired by a religious superhero he sees on TV (Nathan Fillion), Frank reinvents himself as The Crimson Bolt, a self-made superhero who beats criminals over the head with a giant wrench. When a manic young comic store employee (Ellen Page, a long, sociopathic way from Juno) pieces together his secret identity, she's enlisted as his kid sidekick, Boltie. Together, the pair plot to take down Jock and his crew -- plus maybe drop a statue on the head of a guy who key'd a car.

The plot of Super is actually pretty standard stuff -- and, to be honest, so is some of the execution. And, yes, comparisons will abound to last year's Kick-Ass, but the two only resemble one another on the surface: guy with no powers decides to be a superhero. Kick-Ass was about the relationship between comic books and reality; Super could really care less about comic books. Frank isn't a guy who really wants to be a superhero at all -- he's a guy who wants to do terrible things to bad people, and wearing the costume justifies those acts. Frank goes on a killing spree disguised as a moral battle against evil, and Gunn even inserts onomatopoetic cartoon graphics to show just how disassociated Frank is from his actions. That separation and the moral questions it raises are what some audiences are going to struggle with, but it's also what makes Super such an angry, sad and ultimately very moving film.

The movie is a kind of low-fi triumph for James Gunn. I was a fan of his first movie, Slither, but Super is a much more mature, challenging movie (that may be the first time 'mature' has been used in conjunction with Super, because it's a movie where people get clocked in the head with a wrench and gush cartoonish fountains of blood) that says a lot more about who Gunn is as a filmmaker. As a fan of James Gunn since his days with Troma, I'm happy that he's back. Super is super.
Posted by Patrick Bromley at 10:08 PM