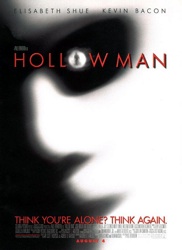 "Am I doing this right?" -Doug

1. Starship Troopers (1997) - Back in November 2010, I highlighted this movie in my "Thanksf'ing" segment (a.k.a., "Five Movies for Which Doug is Thankful"). Rather than C&P that entire entry here (which is SO something I would do), I'll simply say this: if you haven't already seen Starship Troopers, you're dead to me. What are you waiting for? See it! And pay close attention to the scene in which everyone in basic training (boys AND girls) SHOWERS TOGETHER. "Service guarantees citizenship!" Dina Meyer disrobes twice, and, in a deleted scene (bonus footage), you can see a young Denise Richards in a brassiere. See what I mean? This movie is just plain GOOD.

2. Hollow Man (2000) - Kevin Bacon, playing a modern-day Invisible Man, goes insane and ghost-rapes Rhona Mitra. It's only after he kills a dog, however (which happens after the rape), that we realize he's a bad, bad man. Since when does animal murder trump rape? SERIOUS HOLES, this movie has. The good news? It isn't REAL rape (or real dogicide, for that matter) -- it's just a movie! And that means you can enjoy looking at Rhona Mitra's fake boobs without feeling guilty! What's "win-win" in Dutch?

3. Showgirls (1995) - First things first -- you should definitely listen to this podcast, in which Patrick and I discuss (ad nauseum) Paul Verhoeven's cinematic triumph that is Showgirls. BUT, if your time is too precious to be bothered with an hour of insightful, hilarious commentary, then I'll summarize the movie thusly: Elizabeth Berkley-Gina Gershon-Rena Riffel. DONE. Patrick and I saw this on my 17th birthday (half a lifetime ago[!]), and it didn't disappoint*. Because -- really -- isn't it every boy's dream to one day see that foxy actress who he grew up with (read: Jessie Spano) take her clothes off in a major motion picture? I know Mike feels the same way about Miranda Cosgrove.

*Quick clarification: Showgirls didn't disappoint me. I loved it! I mean, what a great birthday! Patrick, however, was less thrilled. In fact, I'm sure he was all, "F This Movie!" Listen to the podcast if you don't believe me.

4. Basic Instinct (1992) - My parents forbade me from seeing Basic Instinct, probably because -- you know ... beaver shot. What's weirder is they let me see Total Recall, which haunted my dreams then, and, to this day, I still don't quite understand. Get your priorities straight, parents! ANYWHO, my memory of Basic Instinct is mashed up with my memory of Disorderlies, which is what my parents rented for me and my sister while they watched Basic Instinct in the other room. Ergo, I can only assume that Sharon Stone exposed her vulva to the Fat Boys in that interrogation room.