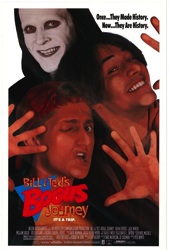 The Hangover II: Still Hangin' Over is in theaters this week to prove that comedy sequels are almost never a good idea. At BEST it can be kind of funny and feel like the first movie, but can it really surpass the original? And I'm not even saying the original is great. I'm saying can the sequel even reach the same dizzying heights of "It's just ok?" Can any comedy sequel? I'll die if I don't find out.

4. Caddyshack II (1988) - I can't believe this movie failed to make a movie star out of Jackie Mason.

5. Clerks II (2006) - All of the things that are good about Kevin Smith's follow-up to Clerks are not the "funny" parts, because a lot of those involve stupid sex talk and interspecies erotica. But the movie does have things to say about growing up and not being where you thought you would be; it's a lot more thoughtful than you might expect a comedy sequel to be.

7. Airplane II: The Sequel (1982) - See, instead of an airplane this time, it's a space shuttle. WHY AREN'T YOU LAUGHING??? Unnecessary, unfunny, but with considerably more Shatner.

9. National Lampoon's Christmas Vacation (1989) - European Vacation and Vegas Vacation are useless, but this one is a worthy follow-up to the original Vacation and one of the few contemporary holiday classics. Almost every set piece in the movie is funny. Especially Chevy Chase on the sled.