Watchin' Trailerz with Doug (Week of May 23) 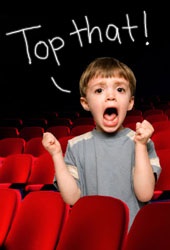 I'm king, and they know it. When I snap my fingers everybody says show it. I'm hot, and you're not. But if you wanna hang with me I'll give it one shot. TOP THAT! #teenwitch

Conan O'Brien's the best. I remember watching his very first Late Night show when it debuted on NBC in 1993 (come to think of it, I've watched ALL of his "first" shows). I was a sophomore in high school, and I snuck downstairs after everyone else went to bed. My brother Rich (10 years my senior) was obsessed with David Letterman (and for good reason -- guy's a genius). I felt that I needed a comparable late night comedy program(?) to devote myself to, and Conan fit the bill. I loved everything about the show -- its edgy humor (half of which I didn't understand at 14), its non-sequiturs, its irreverence ... everything. ESPECIALLY this bit. And this one. This one too. My first hope is that this documentary frames Conan in a way that reinforces my 18 years of fandom. My second hope is that it doesn't make me feel as angry as I did after I watched Inside Job. UGH that movie.

The Green with Envy fake preview is embedded above. The newest "teaser trailer" for The Fuzzy Pack is linked here. If you read my write-up last week on The Adventures of Tintin: The Secret of the Unicorn, you know that I'm not the best person to be commenting on anything Muppet-related. I just don't dig on puppets (please send your hate mail to fthismoviepodcast[at]gmail[dot]com, c/o Patrick Bromley). THAT BEING SAID, I am mildly intrigued by this movie, partially (I admit) because it was written by (and costars) Jason Segel. Funny man, that Jason Segel. However, I'm almost as equally suspicious about this movie BASED ON THE CAST. As much as I love Zach Galifianakis and Jack Black (I really don't love Jack Black -- it's been a long time since The Joke: The Musical, the whole project smacks of hipster cool. Let's hope I'm wrong! I often am! Having James Bobin (Da Ali G Show) direct and Bret McKenzie (Flight of the Conchords) write the music CERTAINLY can't hurt. OK, I've convinced myself -- I can't wait to see this!

Plug "Japan Ham Soap" into Google translator (English to Spanish). Now tell me you don't want to see this movie. Also, "¿Dónde está el jamón malo? El jamón malo esta en el baño con mi hermana. Repita." IN OTHER WORDS ... I don't really have anything to say about Casa de mi Padre, except that, "This is the movie we've been waiting for" -Barack Obama, probably. AND ... I'M DONE.
Posted by Patrick Bromley at 9:55 AM