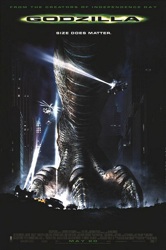 On the surface, there's every reason the movie should have worked. Roland Emmerich and his writing/producing partner Dean Devlin were coming off Independence Day, one of the goofiest and most unabashedly entertaining B-movies of the 1990s. The pump was primed for something bigger, and Emmerich seemed like the right guy to do a remake of Godzilla -- sci-fi B-movie stuff and total destruction are his two major obsessions, appearing in almost every movie he's ever made (some would argue both are the reason for his career's being). But in the same way that Michael Bay seemed like the right guy to do a big-screen version of Transformers (on paper, anyway), being the right guy for the job doesn't guarantee that the job will be done right.

Some would attribute the film's failure to hype: Godzilla was impossible to avoid for nearly a year leading up to its 1998 release, with Emmerich, Devlin and Sony constantly shoving its spectacle down our throats and those ubiquitous "Size Does Matter" posters and billboards plastered anywhere human eyes might see. It's like they were daring us not to like it; audiences, in turn, rose to that challenge and called Emmerich's bluff, rejecting it like a girl being asked out by me in junior high. Though the film was expected to shatter existing box office records, it barely broke even in the U.S.; while worldwide grosses put the movie way into the black with nearly $400 million total, Godzilla was still considered something of a disappointment. This is why the world hates us. 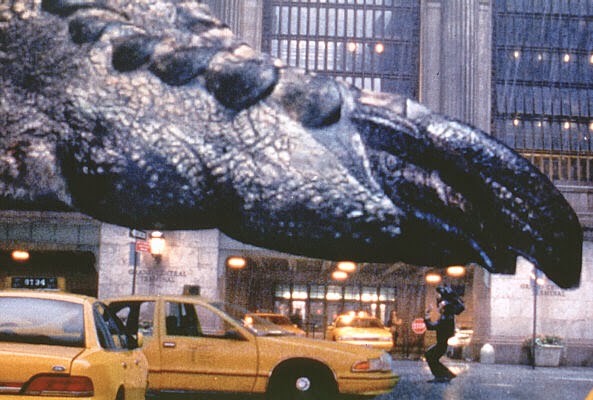 Seeing the movie in 2011, divorced from all its hype, the movie is still mostly terrible. Though the monster design was a well-kept secret in '98, it's pretty uninspiring -- one of many obvious attempts to update the Japanese original to make it "cooler" for modern audiences. I get that the original design likely wouldn't fly in 1998, and can even appreciate the attempt to bring out both Gojira's lizard and dinosaur DNA; it's too bad, though, that the finished monster is so pedestrian. It's not horrible, but after months of secrecy, I wanted to be thrilled by what I saw. Instead, the reaction is more one of "Oh, I guess that's what Godzilla looks like."

Matthew Broderick, playing a character named Niko Tatopoulos not so that Greek Americans receive some representation on film but so that every other character can butcher the pronunciation of his name in one of the film's several running "jokes," is visibly bored and embarrassed through the whole movie. Jean Reno attempts to bring some mysterious charm and swagger to his role, but he's never able to overcome all of the hacky "we are French/the Americans call this coffee?" jokes that Emmerich and Devlin thought would be crowd pleasers. Hank Azaria and the woman playing his wife do some embarrassing "Jersey" shtick through the whole movie, which might feel at home on a sitcom if it wasn't so broad. And, speaking of sitcoms, there's Maria Pitillo. I almost feel bad for her rewatching the movie, because you just know she thought that being cast as the female lead in this giant summer blockbuster was going to make her career take off; just look how Will Smith popped off Independence Day.  Even if her performance wasn't slight and shrill and UPN-ready, Pitillo is given a terrible character to play: her entire arc is that she wants to be a reporter, and plans to use the destruction of New York to further her career. In the middle of a giant lizard attack -- which would, in the real world, force humans to question everything they knew to be true and possible  -- characters stand around bickering about how "he stole my story!" and "you stole my videotape!" And then all this happened.

There are really only two major action setpieces in the movie: the first Godzilla attack, which exists to showcase destruction (which lacks the entertainment value of the chaos in Independence Day and the scope of the destruction in 2012), and a second chase scene through the streets of New York in which the U.S. military has it out with the King of Monsters. This second sequence is the closest the movie ever comes to being exciting, though with its long, unbroken POV takes it feels, at best, like a ride at Universal Studios Orlando. David Arnold's score throughout the sequence is problematic, too; it's relentlessly upbeat, which tells us either a) there's nothing to worry about, draining the sequence of any terror or suspense or b) we're supposed to be rooting for Godzilla. Mixed message, that.

There's a line early on the film where someone reasons that Godzilla has chosen New York because it's the perfect place: it's an island, surrounded by water on all sides but with plenty of room to hide. Hide from what? What has Godzilla ever had to hide from? Are we really to believe that this version of Godzilla comes from some faraway land where it's not the top of the food chain? Of course not. We're explicitly told that Godzilla mutated as a result of nuclear testing, and has somehow gone undetected until now. Of course.

And, yet, time and again, Godzilla actually does hide, only springing into action when it's convenient. The movie is filled with moments in which characters only notice something when it's necessary or, worse, when it will get a laugh; watching Harry Shearer talk on the phone, ignorant to the fact that there is a 200 foot lizard stomping his way through the streets of the city just outside the window. It's one of many examples of the ways that Emmerich is willing to discard logic (yes, even a movie about a giant lizard can have its own logic) for a cheap laugh. Those are the only kinds of laughs to be found in Godzilla. 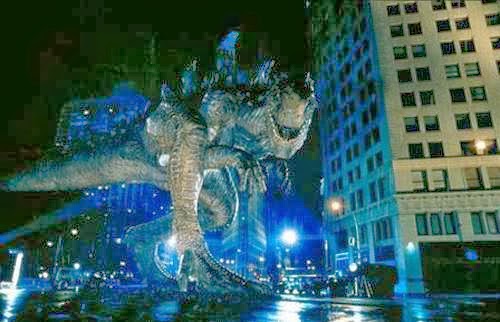 Spoilers coming up: with an hour left to go in this nearly 2 1/2 movie (like Speed Racer, the first entry in "Take Two," Godzilla is overlong by 45 min. to an hour; perhaps there's a correlation between length and shittiness of movie), Godzilla is killed in the most anticlimactic fashion possible. We don't even seen it happen, really; some missiles detonate underwater, and then we see the giant lizard floating around, dead. That's it. So where the hell does the movie have to go for the next hour? I'm glad you asked (I'm not glad you asked). There's a nearly hour-long sequence in which our main characters hole up in Madison Square Garden, which is not the site of hundreds of eggs laid by the title beastie and, which -- wouldn't you believe -- are all hatching at the exact same time, right when our characters happen to be standing around.

Overlooking the fact that, unbeknownst to everyone, Godzilla snuck into Madison Square Garden for what appears to have been a long time and that the way this sequence unfolds is once again insultingly stupid, we have to ask ourselves: what is it doing in the movie? Isn't this a movie about a single giant lizard attacking NYC? DOES SIZE NOT MATTER? First, I'm sure Emmerich and Devlin were high five-ing and touching butts when they came up with the idea for hundreds of Godzilla babies, because it meant they were "doing something new" with the franchise or "taking the next step" or whatever lie they told themselves to avoid blowing their heads off. To me, the sequence always read like a studio note: someone had decided that the velociraptors were the best part of Jurassic Park, and surely we couldn't have what amounts to a whole movie of the T-Rex. I would think that, except I suspect studio notes aren't really necessary when dealing with Emmerich and Devlin; the pair are so pantingly eager to please the largest possible audience that they are their own studio notes. Wall to wall special effects? Check. Giant scale? Check. Idiotic screenplay, dumbed down so that even a child finds it kind of insulting? Check. Humor that's so broad it's sure to make no one laugh? Check. This stuff is all in the screenplay these guys write. They're a studio's dream.

Roland Emmerich may have made worse movies than Godzilla (and I'm not even sure of that), but he's never made one that felt lazier or more calculated. This was engineered to be a blockbuster, and it feels it in every frame -- it's bloodless and lifeless and joyless. I actually tend to enjoy Emmerich's films for their unabashed goofiness and stupidity, but this one tests even my patience.
Posted by Patrick Bromley at 8:35 AM