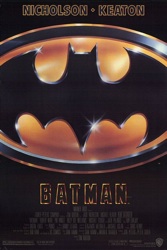 Today's entry in the ongoing Director Essentials series focuses on the career of Tim Burton, who clearly died sometime around the turn of the century and was replaced by a soulless hack Tim Burton imitator. Pile your hair up on your head, crank the Danny Elfman dark carnival and misunderstand with me.

1. Pee-Wee's Big Adventure (1985) - Remember when Tim Burton didn't have to fake fun? This is a great first movie, filled with all kinds of visual invention, energy, stylistic tricks and little calling cards while still servicing the already-defined comic persona of another performer. A live action cartoon that's a great road movie and one of the best comedies of the 1980s. Tim Burton could almost only go down from here.

2. Batman (1989) - And go down he did. There's a lot that's good about Burton's first foray into big-budget movie making -- the production design and art direction are great, and there's a sense of weight and darkness to much of the film -- but it has dated horribly, and its flaws outweigh its strengths with every passing year. It's a landmark for comic book movies, and we might not have the current glut of superhero movies without it (for which Burton should be equally praised and blamed), but looking at it in 2011, one can already see the kinds of problems that would come up in Burton's movies 20 years later.

3. Edward Scissorhands (1990) - After getting swallowed up by the Hollywood machine, Burton came back with his most offbeat and personal movie (still to date). It's good, not great, but there's a large group of people who really, really love it. They're not all correct.

4. Batman Returns (1992) - This is much more of a Tim Burton movie than his first Batman (it might be more of a Tim Burton movie than a Batman movie), which is why it belongs on this list. It's as flawed as the first movie, albeit in very different ways, but there's still a lot to like. Ultimately too angry and ugly for the giant audiences that made the first film a hit.

5. Ed Wood (1994) -Still Tim Burton's masterpiece, Ed Wood contains everything he's good at as a filmmaker and says everything he wants to say. A great movie about outsiders forming a surrogate family, and the need to make personal art by any means necessary. Also, Johnny Depp's best performance.

6. Mars Attacks! (1996) - There's so much silliness and weirdness in this movie, and it's the last time we would see any of that from Tim Burton. He was once a terrific anarchist -- though even Mars Attacks! fails to be anything but soulless comic anarchy. Whereas a movie like Beetlejuice could be a lot of things, Burton's later movies were only able to be one thing at a time. I'll take this over what he's doing now, but Mars Attacks! marks the beginning of the end for Burton.

7. Sleepy Hollow (1999) - Burton's take on Hammer makes one wish he would do more horror movies. Gorgeous, gothic, bloody and funny.

8. Big Fish (2003)  - The closest Tim Burton has come to making a real movie (or good movie) since the '90s, it's also one of his most accessible films. It's a fairly straightforward story, and the trademark weirdness he grafts onto it actually works for the most part. This is the movie that will be reducing fathers and sons to tears for years to come, not because it earns it entirely but because something has to and Brian's Song is now too old.