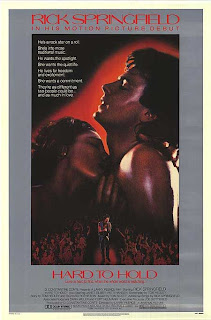 Justin Timberlake is on screen (again) in this weekend's Friends with Benefits (the Volcano to the Dante's Peak that was No Strings Attached), making this a perfect time to F some movies starring musicians.

There are some rules. No supporting roles from musicians (meaning Sting in Dune won't make an appearance). And nobody legit, either. Frank Sinatra and Barbara Streisand and Cher have all won Oscars, so they won't be on. Most of these are examples of stunt casting or vanity projects. Because what they really want to do is act.


1. Joan Jett, Light of Day (1987) - Rock star Joan Jett's first and only lead acting performance was as a single mom/bar band musician in Cleveland. Oh, and she acted opposite Michael J. Fox, Cherry Jones, Michael Rooker and Gena f'ing Rowlands. And the movie was written and directed by Paul Schrader. And the title song was written by Bruce Springsteen. Everything about it makes sense. Jett actually acquits herself pretty well, considering the movie is a pretty heavy drama, but that may just be a case of good casting more than good acting. This isn't available on DVD, so not a lot of people have seen it. It's worth seeking out.

2. Rick Springfield, Hard to Hold (1984) - He's a rock star on a roll. She's into more traditional music. He wants the spotlight. She wants the quiet life. He lives for freedom and excitement. She wants a commitment. They're as different as two people could be...and as much in love.

3. Lance Bass, On the Line (2001) - It's a testament both to Justin Timberlake's talent and the way he has conducted his career that no one saw or remembers the acting debut (and swan song) of his bandmates Lance Bass and Joey Fatone. You know, the two guys from N'Sync that everyone wanted to see in a movie. In a romantic comedy with that pretty-but-annoying girl from Entourage. In 2001, we though Bass's lack of chemistry with his co-star was because he was a stiff non-actor attempting to cash in on his fleeting celebrity by making the jump to movies. Now we know that it's something else. Not sure what.

4. Eminem, 8 Mile (2002) - Rapper Eminem got a lot of credit for being good in Curtis Hanson's movie, loosely based on the star's own life. He is good, too, but more than that he was smart to make his debut in a movie that allowed him to play to his strengths and basically be himself. Mostly, though, I think everyone was impressed that the movie wasn't Glitter.

5. Neil Diamond, The Jazz Singer (1980) - Somehow, Neil Diamond's remake of the world's first "talkie" is even more offensive than the one in which Al Jolson performs in blackface.

6. Ice Cube, Boyz n the Hood (1990) - Yes, now he's a cartoon character who gets beat up by his girlfriend's kids because they want to know if they are there yet. In 1990, though, Ice Cube's breakthrough performance in John Singleton's debut movie was a revelation -- menacing, authentic and genuinely sad. We got a problem here.

7. Prince, Purple Rain (1984) - One of the better starring vehicles for a musician, because Prince did something clever: it's a vanity project as much as something terrible like Hard to Hold, but disguised as a musical. Prince doesn't make himself the center of his own movie, instead letting the songs do the heavy lifting. And the songs are f'ing awesome, so that helps. His two follow-up films, Under the Cherry Moon and Graffiti Bridge, would prove to be the shitty movies that Purple Rain should have been.

8. Bjork, Dancer in the Dark (2000) - Singer Bjork was clearly typecast in this movie about an Icelandic elf who works in a factory and is going blind and ends up on death row following a shooting and who is trying to save up money to stop her son from going blind like she is. Also, it's a musical. Bjork has said that director Lars von Trier made her so miserable during the making of the movie that she will never act again. As if she'd ever find a script this hilarious and romantic again. She just did what she had to do.

9. Art Garfunkel, Carnal Knowledge (1971) - You want a job? I got a job for you. Fix up this pigsty! You get a pretty Goddammed good salary for testing out this bed all day! You want an extra fifty dollars a week, try vacuuming! You want an extra hundred, make this Goddammed bed! Try opening some Goddammed windows! That's why you can't stand up in here, the Goddammed place smells like a coffin!

10. The Fat Boys, Disorderlies (1987) - In the tradition of Tougher Than Leather and Cool as Ice, rap act The Fat Boys' one-off as "actors" finds them hilariously caring for an ailing Ralph Bellamy, who went from acting opposite Rosalind Russell in His Girl Friday to having his diapers changed by big fat novelty rappers. This movie comes up way too often on F This Movie!. I blame Doug.
Posted by Patrick Bromley at 10:46 AM