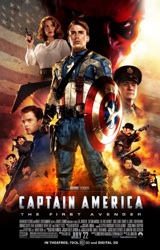 The great Superhero Movie Race of 2011 is at long last over, and there is a clear winner. USA. USA. USA.

There was a lot riding on Captain America: The First Avenger, as it is the last untested puzzle piece for Marvel Studios going into next summers' The Avengers. Director Joe Johnston has always been more a journeyman filmmaker and lacks the big-name recognition of the guys at the helm of past superhero movies -- guys like Sam Raimi, Jon Favreau, Ang Lee and, most recently, Kenneth Branagh. Sure, he made The Rocketeer back in 1991 (I'm pretty sure that's the reason he got the job in the first place; Hollywood executives don't have great imaginations, and if a guy made one superhero movie set in the '40s he should probably be the guy we hire to make another one), but hasn't directed much since then that would inspire our confidence. He really nails the tone here, though, and that goes a long way towards making the movie so enjoyable -- it's entertaining without being too lightweight and just the right side of corny without ever becoming stupid. When people talk about what they want out of summer movies, this is what they're talking about. 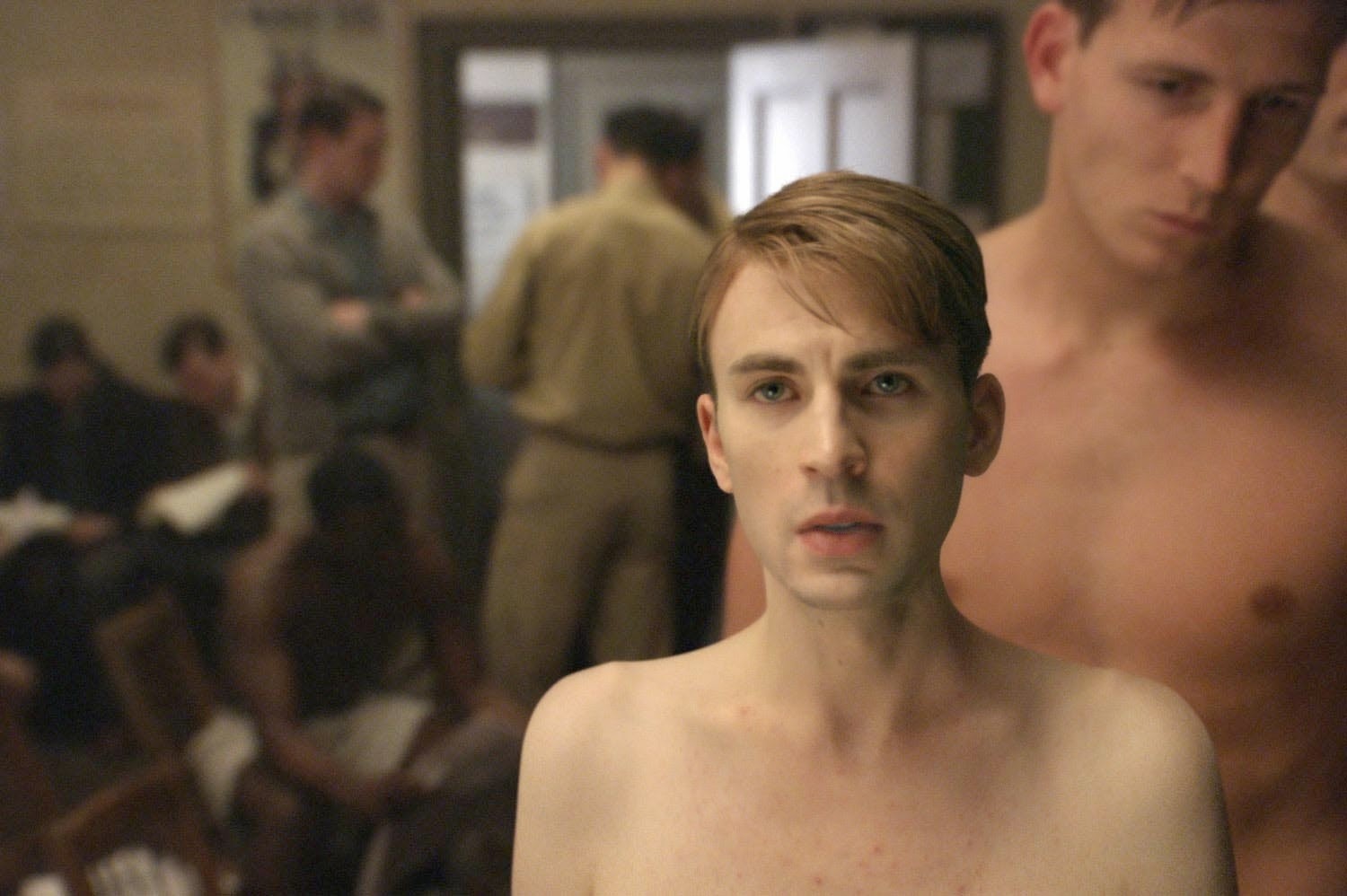 The always likable but frequently under-appreciated Chris Evans stars as Steve Rogers, who begins the movie as a 90 pound weakling (via a creepy Benjamin Button digital effect that's initially distracting and off-putting, but which quickly becomes convincing and the effect vanishes) and who wants nothing more than to do his part and join the service to fight Hitler and the Nazis -- not because of any bloodlust, but because he "doesn't like bullies." He's chosen for a secret government program by a German scientist (Stanley Tucci) and turned into a "super solider" tasked with tracking down the villainous Red Skull (Hugo Weaving), a madman who possesses the powerful Cosmic Cube and is bent on world domination. Because aren't they all?

Yes, Captain America is yet another comic book origin story, and more than half its running time is devoted to explaining how Steve Rogers becomes Captain America (which includes a very amusing detour in which he's made the poster child for the USO). Like a few superhero origin stories before it -- namely, Sam Raimi's original Spider-Man and the first Iron Man -- the movie is at its best when it's focusing on the characters and the back story. Once Evans becomes Cap, things get rushed; much of the action, in fact, is relegated to a single montage in which Captain America and the Howling Commandos (who are never referred to by name) travel from country to country steamrolling Hydra. The last third of the movie still works, mostly because we're invested in all of the characters and Weaving has succeeded in creating such a terrible, credible threat (plus, Johnston and screenwriters Christopher Marcus and Stephen McFeely avoid a lot of common mistakes; for one, Peggy Carter is never placed in jeopardy and in need of rescuing). It's just odd that so many of these superhero movies become less interesting once the actual superheroes show up. 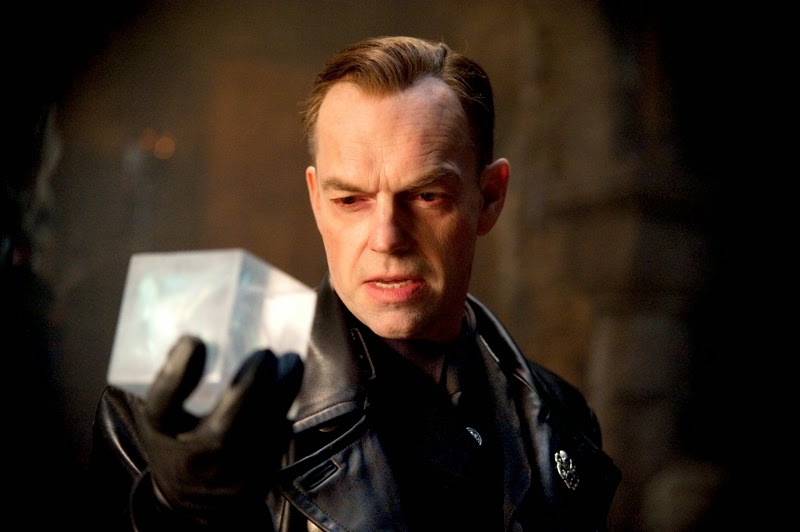 While the movie loses its way a little in the last third, it's still pretty awesome throughout. Marvel has been smart about giving us different kinds of heroes leading up to The Avengers, and I like that even though Captain America takes place within the Marvel universe it's a very different kind of comic book movie than we've seen before. Much of that can be attributed to the decision to make it a period film, which lends it a kind of innocence and a genuine sense of heroism that lacks any cynicism. Every time the movie skirts up against becoming unbearably hokey, it knows just how to pull back and let us laugh with it instead of at it -- it's self-aware but never ironic. Nowhere is this more apparent than with the biggest laugh in the movie, involving a kid being thrown into the harbor.

The movie also has a perfect ending, closing on a shot that's beautiful and inspiring and sums up so much of what makes Captain America such a neat character, squareness and all.

What I mean is that the movie almost has a perfect ending, because unfortunately it extends past its logical conclusion point to give us a scene designed to set up next summer's The Avengers. This kind of ground-laying is exactly what has crippled a few other recent Marvel movies (Iron Man 2 more than any), and though Captain America has less of this than any of the other pre-Avengers movies, it says something that what little of it there is still makes for the worst moments. 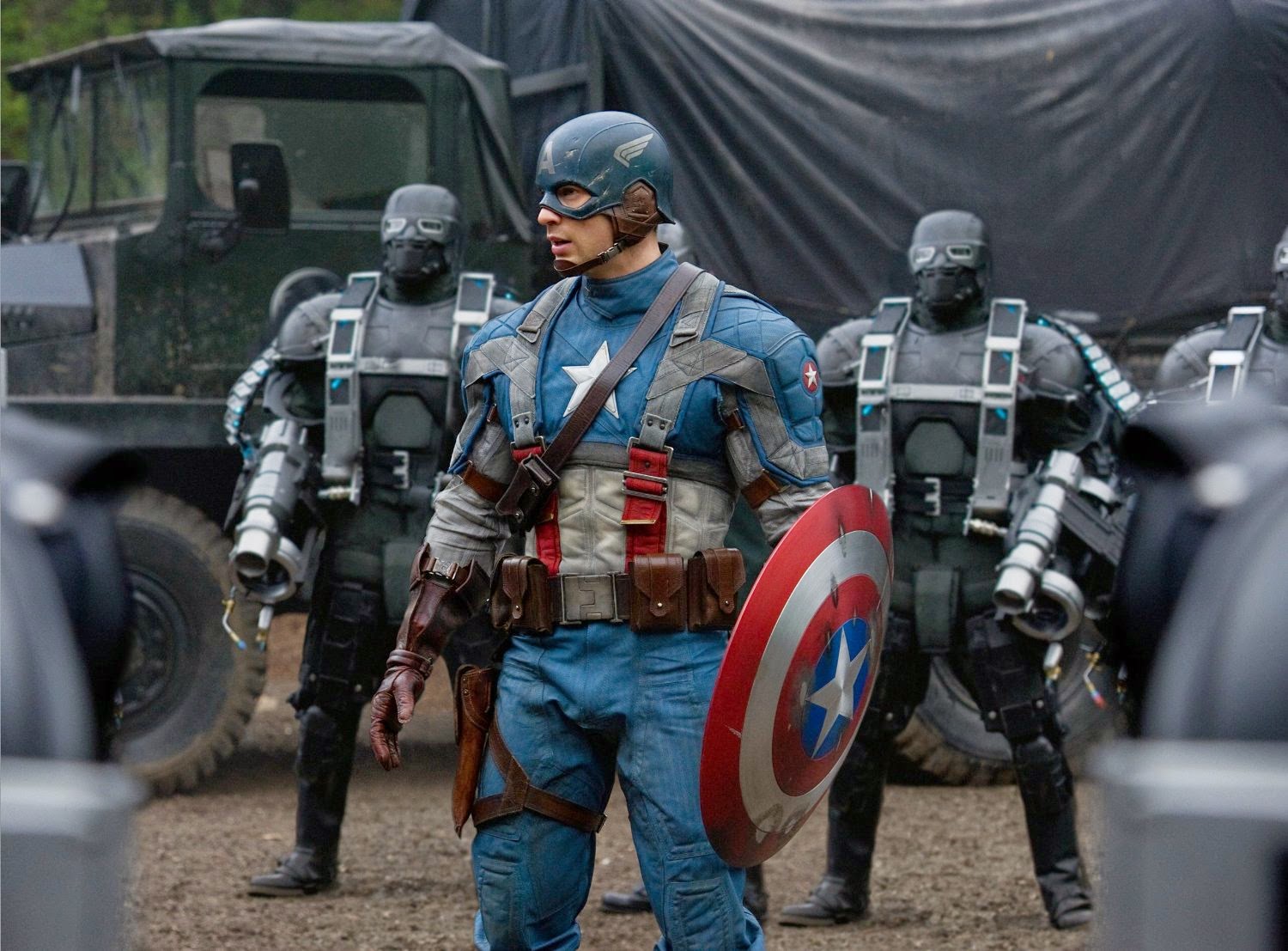 But ultimately that's a quibble, because Captain America is a much-needed reminder that summer movies don't have to be stupid and noisy and terrible. They can be upbeat and entertaining. They can have clever, funny dialogue and strong characterization. They can have good acting and a deep bench of colorful supporting characters, each of whom makes for a welcome appearance when he or she shows up on screen. More than anything, though, they can be plain old-fashioned fun, and it's been a while since we've actually had that at the movies. Most summer movies try and approximate fun with special effects and bloated budgets, but Captain America gets it right. It's not a Great Movie, but it is a great summer movie and one of the best superhero movies we've gotten. And in a summer overcrowded with comic book adaptations (including Thor, X-Men: First Class and Green Lantern), this one stands head and shield above the rest. Now all Marvel has to do is bring on The Avengers and stick the landing.
Posted by Patrick Bromley at 12:32 AM