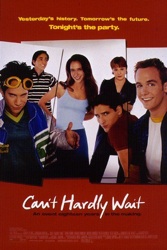 Writing a teen movie is hard work. Just kidding! No it isn't. But naming them sure is hard. You have to stand in front of all your CDs (or albums if you're John Hughes, R.I.P.) and pick a song that maybe has something/nothing to do with your movie, but that can be played during the end credits so that there's at least one good thing in your movie. WHEW! I'm tired. Let's get down to it.

1. Pretty in Pink (1986) - This whole 'naming our teen movies after pop songs' can pretty much be blamed on John Hughes, a sensitive man who wrote a lot of classic movies about how he wanted to sleep with Molly Ringwald. But couldn't. Because SOCIETY.

2. Can't Hardly Wait (1998) - Yes, this is a much better title than the original name, The Party, but I don't think anyone involved with this movie would know The Replacements or Paul Westerberg if he alt-humped them in the face. This clearly came from a long list of "possible titles" presented by some studio executive.

3. Some Kind of Wonderful (1987) - John Hughes strikes again. This movie is slightly more annoying because he decided to turn many of the characters' names into Rolling Stones references (Watts, Amanda Jones, Barf Barf Barf).

4. Can't Buy Me Love (1987) - Sure, the filmmakers could have gone with their original title, Boy Rents Girl, but then they couldn't have blown most of their budget acquiring the rights to the Beatles song. At least it sort of applies to the plot, in which Patrick Dempsey pays Amanda Peterson to go out with him for a week and make him cool. Erika loves this movie for some reason. She also only married me because I paid her to make me look cool. I would demand a refund, but it's not her fault that it's not working. It's the fault of lists like this.

5. American Pie (1999) - This gigantic hit (the Porky's of the second wave of teen movies) has absolutely nothing to do with the Don McLean song of the same name. In fact, I'm pretty sure the "Pie" in the title refers to vagina. I guess it's better than the original title, East Great Falls High, which really should have been East Great Falls High Vagina.

6. Girls Just Want to Have Fun (1985) - The best thing about this dance-themed teen movie (in which Sarah Jessica Parker, played by Gabe Jarrett in a wig, secretly tries to audition for a popular dance contest) is that it never features the eponymous Cyndi Lauper song. The best the producers could afford was a cover version by one Deborah Galli (featuring Tami Holbrook and Meredith Marshall, because who could imagine one without the other two?). This was billed on the poster as Girls Just Want to Have Fun: The Movie, lest you get confused and think that you were seeing one of those posters for a pop song.

7. Sixteen Candles (1984) - Here's the first John Hughes movie named for a song, and a good example of how I suspect he sometimes started with the title and worked backwards. I've never had the affection for this movie that many have had. That's probably because I didn't grow up watching it, because it had boobs in the first 10 minutes and my mom made us turn it off.

8. Pump Up the Volume (1990) - This is a terrible title (taken from the "Macarena" of the late '80s) for a pretty good movie. A little heavy on the teen angst, but Christian Slater is great and Samantha Mathis takes her shirt off. Sometimes being young is less fun than being dead.

9. Love Don't Cost a Thing (2003) - Listen. Can't Buy Me Love is no Back to the Future, but at least it had the good sense to be named after a Beatles song. This 2003 remake casts Nick Cannon in the Patrick Dempsey role and names itself for a Jennifer Lopez song. So, progress. Now excuse me while I progress my head off.
Posted by Patrick Bromley at 9:19 AM