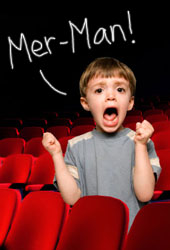 Guys! I FINALLY saw Transformers: Dark of the Soul (JB's joke) this week, and WOAH! What a ... thing it was! Have you seen it yet? If you haven't, DON'T! So loud and sexist and BORING and confusing but also DUMB. Shouting! A CGI/wax figure JFK! Robots blowing the shit out of the Lincoln Memorial! And Michael Bay! What an asshole! Also, guys, I'm worried about Buzz Aldrin. Michael Bay must have medicine that Mr. Aldrin desperately needs, because, otherwise, HUH?!?! Guess you could say I was sucked in by shots of Chicago in the trailer. NEVER AGAIN! For a much better analysis of the movie, please read Patrick's review. Smart guy, Patrick.

Jonah Hill fascinates me. So many of his performances are mean and angry (and lazy? Like he's just ... playing himself? Which is easy, but also lazy?), usually cutting down other characters for cheap laughs. After watching Superbad, I walked away thinking that the movie worked (and really made me laugh) DESPITE Hill's offensiveness. And yet, after time, he's grown on me. I like him in Funny People, and, in Cyrus, he got to show off some of his [limited] range. And now we have The Sitter. It's his first starring role in which he alone carries the movie (no Russell Brand to kick around this time). Aaaand ... it looks mean and angry (and lazy), again. I hope for the best, as it's directed by David Gordon Green, who also directed Pineapple Express (a movie I enjoyed, but didn't love). Finally, I have to assume this trailer was cut by a 12 year old, because it BOLDLY claims that The Sitter "will take you where no babysitting movie has gone before," and then IMMEDIATELY cuts to a little girl farting. Sorry, "sharting." UGH. I mean, do none of us remember Don't Tell Mom the Babysitter's Dead?

I have this weird fantasy (well, "fantasy" is probably the wrong word -- let's just call it a HALLUCINATION) in which I'm able to travel back in time and bring advanced technology to the leaders of a certain era. Specifically, weaponry. Guns and shit. For real. Look, I'm not proud of it, I'm just telling you how my mind works. Right, so ... I go back in time, and I confer with General Washington, for example, at Yorktown. And I'm all, "Yes, your honour [assuming they still used the English spelling], you COULD have your ragtag militiamen fire their rickety old muskets at that defensive line of treacherous Red Coats, OR [and this is where I produce, let's say, the keys to an M1A2 Abrams tank that I've stashed in the bushes a few yards away], we could drive over there RIGHT NOW and blow the shit out of their entire battalion." Then I'd be like, "No need to call over Rochambeau's French fleet -- I've got a few Nimitz-class supercarriers docked in Chesapeake Bay. YOU'RE WELCOME." The war would be over in a couple days, and everyone would now be living in Dougshington, Doug.C. But again, these are just some random thoughts that I have .. I mean HAD. No need to examine me any further. I'm perfectly OK (trust me). ANYWHO, Steven Spielberg directed this, and it looks FINE. Apparently, back in WWI, a goddamn horse was a good weapon-slash-brave warrior. WHATEVS.

I'd rather see Re-Do.
Posted by Patrick Bromley at 9:15 AM