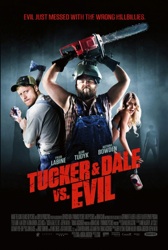 I recently got around to seeing Stake Land, the 2010 vampire movie that's pretty much Zombieland (right down to the "land" part) but with vampires. And it's deadly, deadly serious. Sometimes too serious. And while that seriousness sometimes dares to cross over into pretentiousness, I had to give it to the movie for sticking to its guns (wooden stakes) and never trying to crack jokes or waste time "satirizing" the "conventions" of the vampire "genre." We're living in the Age of Irony now, where there are quotes around everything and where it's way easier to to guard yourself against ever seeming too sincere or silly by letting the audience know that it's all a big goof anyway; if something seems lame it's because it's supposed to be lame or if it doesn't work it's because it's not supposed to work. It's "satire," see?

Horror comedy is really, really hard to pull off, and it seems like a lot of horror filmmakers these days are trying and coming up short (the flip side is horror with no sense of humor whatsoever, thankyouverymuch Saw movies). I think it's because a lot of the guys and girls making those movies now all saw Evil Dead 2 on cable when they were young and grew up wanting to do "that." And, like I said, it provides protection against ever seeming silly -- a potential that infects the horror genre more than most. Very few films and filmmakers have pulled off the horror-to-comedy ratio successfully, and not because too often the movies are too much of one over the other. It's not the amount of each element, but rather the way those elements work together. Bad jokes are worse than no jokes at all, and step all over what's maybe supposed to be horrifying. Go too hardcore with the violence, and suddenly things don't seem so funny anymore (unless you're Peter Jackson, but look at the spirit of the violence in Dead Alive -- it's a very, very gross Looney Tunes cartoon). It's a tricky balancing act, and one that very few directors are able to make work.

Which, of course, is just a loooong precursor to saying that the new horror comedy Tucker & Dale vs. Evil is that rare horror comedy that works. What's more, it's a horror comedy that knowingly "plays" on genre "conventions" -- that is to say, it requires some knowledge of the movies it's goofing on going in. Alan Tudyk (A Knight's Tale) and Tyler Labine (Rise of the Planet of the Apes) star as the eponymous Tucker and Dale, respectively, two simple, sweet, beer-swilling who recently purchased their own vacation home in the middle of the woods. On their way up there to spend a few weeks relaxing, fishing and restoring their dilapidated sanctuary, they come across a group of college co-eds who are immediately afraid of Tucker and Dale and assume them to be backwoods axe murderers.

Things only get worse from there when, after a misunderstanding, Dale rescues one of the girls (Katrina Bowden, better known as Cerie on 30 Rock) from drowning and brings her back to the cabin to recuperate. The rest of the college kids, assuming their friend has been abducted, vow to rescue her from the redneck killers who took her.

I don't want to say much more about the plot of Tucker & Dale vs. Evil, because that would spoil a number of its surprises -- for both better and worse. The less you know going into the movie, the better, because watching the way it unfolds and plays both into and against your expectations are among its best qualities. Its other best qualities, of course, are the two lead performances from Labine and Tudyk, who could easily have fallen into good-ol'-boy stereotypes but instead come off as sweet, likable and, best of all, believable as best friends. Their relationship is the engine driving the movie, and if it fell short the whole film would amounted to nothing more than two hours of hillbilly jokes. Instead, Tucker and Dale are real people that we care about. How often does that happen in a horror movie?

There are some big laughs in the movie, and some very cleverly-designed setpieces, but not quite enough of them. I won't spoil the funniest scene in the movie (and it is one of the funniest I've seen in a long time), but it involves Alan Tudyk and some bees, and it's such a big laugh that the rest of the jokes feel underwhelming by comparison -- I left the movie wishing there had been more of those moments. Of course, there's a double-edged sword at work here: if Tucker & Dale is about nothing more than gags and gimmick, it turns into a cheap genre exercise -- an experiment in subverting the slasher genre with nothing more going for it than its own tricks. Conversely, if it strays away from that too much (and at times it does) to focus on the characters, we're left wishing that the movie had done more with its clever premise.

Of course, comparisons will abound to Edgar Wright's great Shaun of the Dead, largely because it was the last movie to so successfully combine comedy and horror. It also bears a similar reflexive relationship with its own horror subgenre: Shaun is to zombie movies as Tucker & Dale is to slasher movies. The central friendship between Tucker and Dale is reminiscent of that between Simon Pegg and Nick Frost, but that's pretty much where the comparisons end. For one, Eli Craig doesn't direct Tucker & Dale with nearly as much style or confidence as SotD (many of the special effects are underwhelming and cartoonish -- in that they were clearly done on a computer in post), and it doesn't have the same incredible bench of supporting characters. Much of that is by design; aside from Tucker and Dale and, to a lesser extent, Katrina Bowden's Allison, all of the characters are generic, interchangeable fodder. That's fine -- it's what the film is going for -- but none of the actors playing the college kids manage to distinguish themselves or stand out as archetypes (even within the admittedly narrow genre of slasher movie victims, there are recognizable "types" that could have been represented). It's this lack of ambition and attention detail that keeps Tucker & Dale vs. Evil from being a Great Movie. It has to settle for being a really good one.

*Tucker & Dale vs. Evil has received distribution from Magnet Films, and will receive a limited release in the coming weeks; it should also be available via VOD.
Posted by Patrick Bromley at 10:43 AM