Take Two: Masters of the Universe 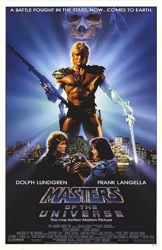 I must not have been the most discerning of 10-year olds, because at one point in my life I thought Masters of the Universe was a pretty ok movie. That's weird, because it's not as though I liked every movie I saw at age 10. 1987 was the same year I saw Spaceballs and didn't like it at all, and it was the one first-run movie my family saw that year. We were supposed to see Harry and the Hendersons (though I really wanted to see Predator), which I saw on video several months later and really didn't like either. That movie is still terrible and anyone who likes it shouldn't be trusted. I'm serious. What I'm saying is that I did have some sort of shit detector even at 10, and for some reason the He-Man movie didn't set it off.

I've been on something of a fantasy kick lately, what with all of the Harry Potter ending and Game of Thrones being awesome on HBO and the Blu-ray extended cuts of Lord of the Rings begging to be watched on my shelf. The 1980s were a Golden Age for fantasy movies, with sword and sorcery movies regularly receiving theatrical release and, more importantly, getting heavy rotation on HBO. There was great fantasy (Time Bandits, Conan the Barbarian) and terrible fantasy (Gor, Conan the Destroyer), and the market was oversaturated so much so that nowadays it all gets lumped together in one decade-long pile of genre poo. By the end of the '80s, fantasy was on its way out the door and wouldn't rear its head but for a few times in the 1990s (it usually involved a CGI Sean Connery dragon barking to Dennis Quaid about how entrapment is what cops do to thieves) until Peter Jackson brought it back in a big, bad way, leading once again to more terrible fantasy (Eragon, In the Name of the King) because the Circle of Life. Hakuna Matata. Be Our Guest.

Masters of the Universe, released, as it was,  rather late in the '80s, was actually at the tail end of the fantasy trend (the last viable entry in the genre I can think of was Willow, of which I actually watched the first few minutes for this "Take Two" column before deciding to hold off and do that one in the future. Don't worry. It's still coming.), which is part of what makes it so amusing now. The other, bigger piece of that puzzle is that it was produced through Menahem Golan and Yoram Globus's legendary Cannon studios, and it feels exactly like a movie made by two Israeli cousins trying to approximate American fantasy movies for half the budget. And also trying to cash in on a popular kids' cartoon, which itself was basically just a toy commercial. A homoerotic toy commercial. This is ultimately what drew me to revisit Masters of the Universe; not only have I not seen it in over 20 years, but it represents one of the very first attempts to do a live-action film based on a toy back when that idea was naive and novel. In 1987, it was laughed off as schlocky, exploitative kids' stuff. In 2011, it's called Transformers and it's one of the most successful film franchises of all time. We have gotten so much fucking stupider as an audience that I would cry if I didn't think it would rust up the gun in my mouth.

So Masters of the Universe is pretty terrible, but it's not evil, and that makes it better than a lot of what comes out these days, whether for kids or adults. It starts in the far-off land of Eternia (a suburb of Seattle), where skull-faced Skeletor (Frank Langella, making this the second worst thing he's been in, after Whoopi Goldberg) and his army of prosthetically enhanced bad guys have taken over Castle Grayskull and kidnapped the powerful Sorceress and are planning on ruling everything when the Eye of the Galaxy and a moon aligns and seriously who gives a shit. It's even more boring to type out this fantasy nonsense than it is to read it.

Combating Skeletor are the Good Guys, led by He-Man (Dolph Lundgren), a shirtless guy with a sword, a mullet and a dream. On his team are Teela (Chelsea Noble) and her dad Man-at-Arms (Jon Cypher, someone's grandpa who wandered into the costume department and wound up in the movie). There's also an annoying little person wizard named Gwildor (Billy Barty), because every fantasy movie aimed at kids needs shitty comic relief. On the cartoon series, it was a floating faceless wizard named Orko. I guess either the floating effect was too expensive or the face-removing technology wasn't there yet, though, so we get Gwildor, who, during a daring escape attempt in the throes of battle, transports He-Man and company back to present day California. And by "present day" I mean "1987," which is actually almost 25 years ago now, but I don't think the movie is about time travel. So that's a pretty big plot hole, I think.

Living in California are a couple of teenagers in love: Julie (Courtney Cox from the "Dancing in the Dark" video), who just lost both her parents in a plane crash, and Kevin (Robert Duncan MacNeill), who plays in a band. It's their last night of high school and Julie is moving away, so Kevin is all "Geez, can you stop talking about your dead parents" and "These things happen!" and Julie is all "Gosh, you're right, tell me more about your band." And they find this key, which is the thing that Gwildor used to transport everyone to Earth, but Kevin thinks it's some kind of New Wave synthesizer because he's a fucking blockhead. Oh, and Skeletor needs the key, too, because with Ultimate Power comes Ultimate Key Needing, so he and all the bad guys in the rubber masks come to Earth, too. So everyone is on Earth and they chase each other around and they fight. The End.

Like a lot of live-action movies based on cartoons, Masters of the Universe isn't interested in bringing to life the fantasy world depicted in the animated series. Instead, it just takes these fantastical characters and transports them to Earth. Is it a cost-cutting measure, because it's cheaper to shoot in L.A. than to make a fake Eternia? For a movie produced through Cannon Films, I could believe that. But Transformers plays the same game, and that movie had all of the money in the world at its disposal. Is it just that screenwriters love to write 'fish out of water' stories? Or is it that audiences will grow bored unless they can see a close approximation of themselves and/or a Taco Bell on screen? The Smurfs, which just came out a few weeks ago, does the same thing. Do the makers of these movies really believe that a kid watches the cartoon and wonders what it would be like if they could make a live-action version of this thing that they love, but is desperate to see said live-action version take place in modern day New York? No. The kid wants to see Eternia or Cybertron or Smurf Village shown on screen. Also, that was a trick question, because no kid watches The Smurfs. That show hasn't been on for years. Fuck that movie.

Dolph Lundgren appears to have been cast because he's big and blonde and Swedish (read: "other") and looks the part -- he fits the suit (or lack thereof, as the case may be). Frank Langella actually predates Jack Nicholson's Joker by a couple of years as the respected dramatic actor hamming it up in genre costuming.  He's as convincing playing Skeletor as any professional actor could be playing a character named Skeletor, but not much else. It's not really his fault, because there's no sense of fun or color to the role. Usually even is something bad like this, the bad guy is the best thing about the movie because he's the only one able to cut loose and be over the top and acknowledge what kind of movie he's in. Not here. It's like the producers were only concerned with two things: Does he have a latex skull mask on? Does he hate He-Man? Great. Roll camera.

I don't really understand the rest of the bad guys, either. The Masters of the Universe cartoon had a bunch of bad guys for the screenwriters to choose from, and since the whole appeal of a MotU live-action movie is the chance to see the cartoon characters brought to life, you would think they do that. Nope. Evil-Lyn is in there, because it was the '80s and Meg Foster had a couple of weeks free, and so is Beast-Man. The other three villains, Saurod, Blade and Karg, have all been made up for the movie. Was their makeup easier to do? (Yes for Blade, who is just Mr. Strickland with a sword and eyepatch [James Tolkan, the actual Mr. Strickland, also shows up in the movie as a cop]). Or was it just for the cynical purpose of trying to sell three new action figures? Of course it's that one. You win.

I'm not sure why I didn't think Masters of the Universe was all that bad back when I was 10. I guess it's because it was the '80s, and I was more tolerant of silly fantasy movies because I had grown up with so many on cable. Also because it was the '80s and my 10-year old face was deep in mountains -- literally mountains -- of coke. But Masters of the Universe is terrible, and that's ok. It's an '80s fantasy movie from Cannon. That's not without its charms. Movies that are much more creatively bankrupt are released weekly these days, and those things have huge budgets and make billions of dollars. In fact, there's been talk for years that John Woo wants to do another Masters of the Universe movie, and I don't think it's because they failed to get it right the first time. It's because it has brand recognition and the potential to sell toys, and that's all that's needed to get a movie on 10,000 screens. This new version will have a bunch of slow motion and doves flying behind He-Man as he fucks some bad guys up -- with two swords, of course -- while "Somewhere Over the Rainbow" plays in the background, and it will make over $100 million and a sequel will be greenlighted by Monday morning, and we can read yet more stories about how movies based on toys are the most popular kinds of movies and then Warner Bros. can put a M.A.S.K. movie into production while Paul Thomas Anderson struggles to find funding for his next directorial effort.

I'm going to go take my final bath.
Posted by Patrick Bromley at 6:50 AM