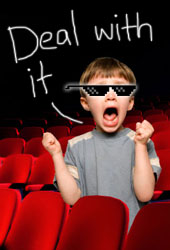 I'm going to apologize in advance for this VERY Chicago-centric introduction. Sorry readers from lesser cities! Does anyone watch WGN-TV morning news? Specifically, entertainment reporter Dean Richards and his craptacular "Dean's List" (you get it) segment? GOD HE IS THE WORST. From mispronouncing "biopic," to mistaking the 1990 remake of Night of the Living Dead for the original, he's an ass-kissing, TMZ-caliber insider (and one step away from writing the "Stars -- They're Just Like Us!" column for Us Weekly). While defenders (and Dean Richards himself) might claim he's a rebel by citing his (now famous?) encounter with Mel Gibson, true Chicagoans know he's just a trumped up voiceover actor. What bothers me the most is that he honestly considers himself as a bona fide film critic. Guy thought Inception was too confusing, but LOVED Pirates of the Caribbean: On Stranger Tides! Which is a very weird movie to champion! He even gave The Smurfs a pass. I wouldn't even be all that irked if he just owned his hackiness. Seriously, Dean Richards needs to trip and fall (again), because the last thing we need is another one of these. "It's not that hard being a film cricket" -Dean Richards, most definitely.

While I wouldn't call my wedding "Beatle-themed," there were definitely enough cues that let our guests know how much my bride and I love that band. We had all 13 U.K.-released Beatles albums serve as table numbers (plus the Love Songs compilation LP), we cut our cake to "Savoy Truffle," and our favor was a CD of songs with artwork inspired by the white album. Salient to this trailer: our first dance was to George Harrison's "Something," which, while I know we weren't the first couple to pick this VERY popular, INCREDIBLY beautiful song, certainly meant a lot to us. So here we are (you and I, not me and my wife -- that prologue is over), almost 10 years since the passing of George Harrison, and Martin Scorsese gifts us THIS. It looks touching and beautiful, quiet and dignified, like Harrison himself. This isn't the first music documentary that Scorsese's directed (he recently did Shine a Light about the Rolling Stones, and No Direction Home: Bob Dylan), and some have asked if he picked the right Beatle to feature. I say, fuck that question. Watch this movie in October if you know what's good for you.

You can't keep a good child rapist down. #RomanPolanski

Germain Lussier from slashfilm.com reported yesterday (with help from movieline.com) that The Worst Movie Ever! grossed $11 during its opening weekend (two midnight screenings in LA). That's it. ELEVEN dollars. Lussier goes on to posit that the nonexistent box office is "probably a good thing for the movie. I'd never heard of The Worst Movie Ever! ... and I'm sure fans of bad movies like The Room and Birdemic [Ed. note: fuck you] are now going to seek this thing out." Except, why? Why seek out this piece of shit? So we can laugh at it? How is this even fun anymore? And that's not a rhetorical question. Glenn Berggoetz, the director (and writer and star and producer) titled this thing The Worst Movie Ever! He set out to fail, and he succeeded. And now this whole thing needs to go away. Patrick calls this "the evils of irony," and I couldn't agree more. We live in a hyper-ironic society with quotation marks around everything, and it's EXHAUSTING. Frankly, I'm pissed off right now that I even KNOW about this movie. Mr. Berggoetz probably has talent as a "filmmaker" (see what I did there?), but he's more interested in NOT CONTRIBUTING. Enough!
Posted by Patrick Bromley at 6:47 AM