F These Movies We Can't Turn Off Once We Start Watching 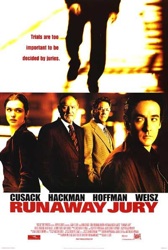 They don't have to be good. They just have to be on. Let's F those movies we can't stop watching anytime they show up on TV.

Doug: Oceans Eleven (2001) - Lately, it's been The Social Network, but I think that will fade (and, in fact, it feels like it already has). It's so new, and it's ALWAYS on Starz (the "Z" is for "Zavings"). I mean, I can't avoid it. It's obviously a "cool" film, but it feels like it's in the same exact spot every time I turn it on. But it's not. Which is a testament to a.) how quickly it moves (I mean that as a compliment), and b.) how it's a little repetitive from scene to scene (I mean that as a slam [let the boys be boys!]). Still, it's pretty great.

For the past decade, however, Ocean's Eleven is a movie I leave on regardless of what I'm doing, what time of day it is, how late I am for Patrick's son's birthday ... it doesn't matter. I stop in my tracks (yes, I leave celluloid "tracks" with my cinema "hooves") and watch it. Or, I leave it on in the background while I do other stuff (never you mind what I'm doing -- I assure you it's important). Ocean's Eleven is comforting. It's familiar. It's fun. And, like the former, it's cool. Like, way cool. It's all-star cast is great (even Julia Roberts and the leprechaun from the Hawaii Five-O reboot), and Soderbergh obviously loves the subject, the actors and the locations (Reuben: "You're Bobby Caldwell's kid. From Chicago. It's nice there, do you like it?" Linus: "Yeah." Reuben: "That's wonderful. Get in the goddamn house."). Intangibly awesome.

Mark Ahn: Any Action Movie with Jason Statham in the Lead - You read that right: all of them. That means The Transporter series, the Crank series, Death Race, The Mechanic, the Job movies (Italian and Bank), and The Expendables (he isn't the lead, but I love the crap out of Lock, Stock, and Two Smoking Barrels and Snatch). The upcoming Killer Elite looks like another solid entry into the Statham hero decalogue, or however many there are.

I'm aware that I'm painting with a very big brush, but Statham's movies consistently deliver low maintenance, low-risk, high-yield fun. White man kungfu? Check. Stylish stoicism? Yup. Car chases? Bueno. Snarky British nonsense? Piss off. Statham himself isn't dynamic and he often falls into the British habit of understatement, but he's not boring. Most of these movies don't take themselves too seriously, have eye-catching set pieces, and are all over TV and cable. Jason Statham is the action Barbie doll that you can dress up in any kind of action attire you want: honest thief Barbie, assassin Barbie, mobster with a heart of gold Barbie. I'd say more, but I'm about to watch Revolver on Netflix.

Mike: Forgetting Sarah Marshall (2008) - I've seen Forgetting Sarah Marshall about a million times, and I anticipate I'll see it a million more. Not only is Sarah Marshall the best romantic comedy to come along in years, but it's also one of the most watchable damn movies I've ever seen -- when it's on TV, without fail, I'll put it on. It's the rare rom-com that gives its leads dimension: Jason Segel and Kristen Bell manage to give performances that are funny, sweet, and heartbreaking all at once. They portray a ruined relationship in which everyone involved tried to make things work at one point or another, but when all is said and done, they just couldn't pull it off. It's not black and white; in the end, there's no villain. It's about two people that loved each other, but aren't right for each other. Jason Segel's script doesn't treat us like we're idiots, but instead treats us like we're adults. With all of that said, it's also really funny. The supporting performances by Russell Brand and Paul Rudd are hilarious without ever being overwhelming. And, my God, I fell in love with Mila Kunis in this movie. And she didn't even have to make out with a girl! If I were forced to list my favorite movies of all time, Forgetting Sarah Marshall might not pop into my head, but at the end of the day it holds a place in my heart as big as any other movie.

JB: Shattered Glass (2003) - Shattered Glass is the film I find it impossible to channel surf past. This largely overlooked gem is quite wonderful. It tells the true story of Stephen Glass, who fabricated dozens of stories during his brief tenure at The New Republic.

Hayden Christensen’s performance in the title role is very good and proves that he wasn’t bad in the Star Wars prequels, just miscast. Here his pathetic, pleading, unsympathetic, worm-like performance makes sense. The way he over pronounces words actually starts to grow on you. Peter Sarsgaard’s Chuck Lane is the hero of the piece, doggedly pursuing all of Glass’s many lies. It works as a detective story, a parable about morality, and a musing on the current state of journalism in this country.

The film is also littered with great cameos: Steve Zahn shines in a rare dramatic performance, Rosario Dawson is easy on the eyes, and Chloe Sevigny keeps her clothes on. Hank Azaria turns up in one of the film’s best scenes as Glass’s former editor.

I should know—I have seen it fifteen or sixteen times. It was a staple on basic cable just a few years ago. Where did it go?

Patrick: Runaway Jury (2003) -  Confession: I have never read a John Grisham book (or any book period), but I have seen most of the movies made from his books and they are garbage. Law garbage. Idealistic young hotshot law garbage. Except when I IMAGINE THEY ARE WHITE and then they are hard-hitting and powerful and very, very sweaty. Having said that, there are two Grisham movies that I can't ever turn off: the first is John Grisham's The Rainmaker, released in 1997 and directed by Francis Ford Coppola. I had no interest in seeing that movie, because I had been so burned out by the Grisham formula and resented having yet another handsome new actor shoved down my throat (pre-Do-You-Like-To-Eat-Apples Matt Damon). Then I saw it and loved it (it was one of my favorite movies of that monster year), and now I have to watch it EVERY SINGLE time it comes on. I love the supporting cast, I love the dialogue (even the narration), I love the way it's about all of these small stories in the service of one big bad insurance takedown. I think it's genuinely great.

What I do NOT think is genuinely great -- and yet what I still cannot stop watching in its many, many basic cable reruns -- is 2003's Runaway Jury, the last gasp of the Grisham adaptation genre (unless you count Christmas with the Kranks, and I DO). It's not a bad movie, but it really shouldn't inspire more than casual indifference, yet I am addicted to it. The excellent cast, which includes John Cusack, Rachel Weisz, Gene Hackman, Dustin Hoffman, Bruce McGill, Jeremy Piven, Luis Guzman and Cliff Curtis (among others) is a big part of the movie's entertainment value, as is the quick pace and endless series of twists. It might as well be science fiction for as much sense as it makes (all this for jury tampering?), but for some reason I don't care. I have to keep watching it.

Alex: Die Hard (1988) - I won't belabor that "How AWESOME is Die Hard?" point any more than is necessary, but, really, how awesome is Die Hard? I'm firmly of the opinion that TNT should ditch its tired-as-all-the-fucks "24 Hours of A Christmas Story" gimmick in favor of "24 Hours of' Die Hard." Or just "365 Days of Die Hard." Wait. How come there isn't just a "Die Hard Channel"...?
A Few Good Men (1992) What's not to like here? Tom Cruise is firmly entrenched in his string of roles as "the cocky young (figher pilot/race car driver/bartender/attorney) who learns lessons about life and love." Jack Nicholson nearly chokes to death due to all the scenery he is eating. J.T. Walsh steals every scene he is in, even though I swear he passed away five years before the movie came out (FACT CHECK: he passed away in 1998, but I just think he has so cornered the market on posthumous movie roles that I've convinced myself he was never alive at all.) Hell, there's a even a scene where flat-topped Kevin Bacon plays pickup basketball! Someone get Comcast on the phone, I've got renew my subscription to the "A Few Good Men Channel"!!

The Fugitive (1993) - IMDb tells me that this movie runs 2 hours, 10 minutes, but I'd swear that the time between Tommy Lee Jones's "farmhouse hen house, outhouse or dog house" speech and Harrison Ford's final girly punch to Jeroen Krabbé's smarmy mug is no more than 30 minutes. This is the film that once and for all proved that being wrongfully accused of your wife's murder and risking life and limb to prove innocence after nearly dying in a train collision can actually be really fun. My only concern would be that when I order "The Fugitive Channel," the customer service reps know that I am referring to the 1993 film and not the 1963 television series.

Twister (1996) - There is not one line of dialogue that escape's Philip Seymour Hoffman's lips that is not fucking hysterical. Even "It looks to hit Wakita head on" has me chortling if the movie is on late enough. In terms of its TV rewatchability, Twister is the classic "move the goal post" movie, in that you always find yourself saying "Well, I'll watch till they chase the first tornado," which gives way to "Well, I'll wait until the cow flies across the road," which inevitably leads to "Well I can't really miss the part where the twister rips through the drive through while The Shining is on." Anyone have a good "Twister Channel" joke? Sound off below!

Posted by Patrick Bromley at 8:07 AM