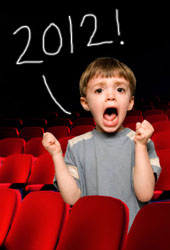 Eddie Murphy is considered by many (including Howard Stern) to be one of the funniest men [still!] on the planet. Apparently, this is solely based on his choices in the 1980s, including his stint on SNL, his million-dollar laff and his hit single, "Party All the Time." But really, has anyone tried to sit through Eddie Murphy Raw lately? I cannot imagine that it holds up, and New York Magazine's wonderful Vulture confirms my suspicions. Aside from his "successful" role as (the voice of) Donkey in the Shrek movies, he hasn't made one single successful or respectable movie in exactly 64 years. This fall, Murphy costars in Tower Heist (I featured the "totally awesome!" trailer for it a few weeks ago), which is directed by Brett "Where My Bitches At?" Ratner, who also, coincidentally, is producing the 84th annual Academy Awards ceremony on Feb. 26, 2012. Ergo, Mr. Murphy will be hosting next year's Oscars. While I aim to make PLENTY of Pluto Nash jokes on the day of the event (follow our Twitter account as we live-tweet the telecast!), I'm actually (dare-I-say) ... excited about this choice? Not that it EVER matters who actually hosts this fucking incestuous lovefest, and a goddamn Heinz Automato would be better than the desperate need of Anne Hathaway and the stoned/severed limb of James Franco. But still! A once-funny standup who's NOT Billy Crystal! That might be good! Or it might be awkward! Who knows?! Of course, Bruce Vilanch will have to clean/punch up his rant on homosexuals (you have to play to your audience, obvi), but the show could contain some genuinely funny moments. Then again, we may all be dead before it airs. #2012

I never read the books. Aside from an onslaught of [really boring] casting news this summer, I know very little about the mythology surrounding the series. And this is just a teaser trailer, as much of the movie has yet to be shot. All that aside, this just looks like a live-action version of Pixar's upcoming Brave. Except with more Mystique. And, while the first movie is still being filmed (and without knowing whether or not it will be commercially successful), the film adaptation of the second novel in The Hunger Games trilogy, Catching Fire, has ALREADY been given a release date of Nov. 22, 2013. Unfortunately, we'll all be dead then. #2012

What's the deal with introductions to trailers on YouTube? I mean, how fucking annoying is that? "You know what, Mr. Steve Martin? I was on the fence about your movie, but because you stood awkwardly on a sterile soundstage with Mr. Jack Black and Mr. Butterscotch Stallion, I think I'll see it. One please!" -me, after losing 17 seconds of my life, thankyouverymuch. Except, no? This trailer looks AWFULLLLLLL! I mean, reallyreally bad! So boring and conventional and JEEZ it just went by in a blur of noise and light! Like, a douchy version of The Bucket List (for douches). The only thing worse would be if Jack Black's character invented an aerosol spray that evaporated dog poo, Envy-style. VAPOORIZE IS THE ONLY THING WORSE! This movie is called The Big Year, but WE all know that NEXT YEAR is the big year. #2012