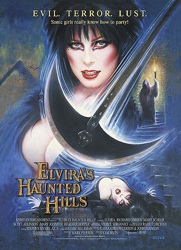 The horror comedy has proven to be a difficult genre to pull off successfully, because most attempts are neither funny nor scary. They're just monster movies with bad jokes. But it's Scary Movie Month, so let's take a look!

Don't forget to join in on the F This Movie! Scary Movie Challenge II!

1. Transylvania 6-5000 (1985) - Jeff Goldblum and Ed Begley Jr. are reporters dispatched to Transylvania to cover monster sightings and wind up in some unfunny trouble. This is the typical horror comedy treatment for the 1980s, ripping off Abbott and Costello Meet Frankenstein but ignoring the fact that that movie took its monsters seriously. It's what made the funny stuff funny. Still, at least Geena Davis is hot.

2. Zombieland (2009) - Pretty good horror comedy feels a lot like the pilot to a TV show, because that's what it was meant to be. The result is that it introduces some likable characters and sets up an interesting world just in time for the end credits to roll, leaving you ready for another, better movie to begin. We'll just have to make due with this one.

3. Once Bitten (1985) - Lauren Hutton stars in this terrible vampire movie about an aging beauty who desperately needs to fuck Jim Carrey in order to stay vital. Later remade as Jenny McCarthy's life.

4. Shaun of the Dead (2004) - One of the best horror comedies ever made, if not the best, because it works equally well as both. Edgar Wright is the shit's meow.

6. The Raven (1963) - Roger Corman adapted Poe's poem very loosely and came up with a gothic comedy featuring several of the major stars from his stable in the '60s: Boris Karloff, Peter Lorre, Vincent Price and even Jack Nicholson. It's incredibly silly, but fun to watch so many great actors try and out-overact each other. Spoiler: Vincent Price wins.

7. Full Moon High (1981) - If "Adam Arkin's starring debut" isn't enough to hook you, maybe "Ed McMahon acts!" is. Full Moon High is, unfortunately, what most horror comedies are like. Which is to say they are shitty garbage (see: Transylvania 6-5000). At least this one will give you a new appreciation for Teen Wolf (because Boof).

8. Evil Dead 2: Dead by Dawn (1987) - Sam Raimi ushered in the evolution of the horror comedy: the splatter comedy (sometimes known as splat-stick). Only Peter Jackson's Dead Alive would come close (ok, beat) to the energy, wit and inspired use of gore for laughs that Raimi achieves here. When people complain about the "gross out humor" in something like American Pie, they don't know what pussies they sound like.

9. Abbott and Costello Meet Frankenstein (1948) - The godfather of horror comedy, featuring all of the classic Universal monsters minus The Mummy (even the Invisible Man makes a cameo), which alone makes it a classic; the fact that it's so funny is just a bonus. This one should be watched once a year.

10.  Tremors (1990) - You show me someone who doesn't like Tremors and I'll show you someone who's never seen Tremors.
Posted by Patrick Bromley at 7:06 AM