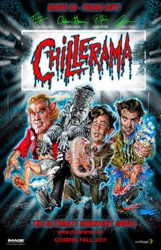 Horror anthologies can be so much fun and seem, on the surface, to be so audience-friendly that it's incredible there aren't more good ones. Think about it: there was 2007's Trick 'r Treat, which never even received a theatrical release and didn't see the light of day until it was dumped direct-to-DVD in 2009, and before that the last good horror anthology was...Creepshow? That's 25 years. Fucking criminal.

Chillerama, the new horror anthology put together by four up-and-coming horror filmmakers (or three up-and-coming horror filmmakers and the guy who directed Detroit Rock City), isn't going to be reversing the trend. It's more Amazon Women on the Moon than it is Tales of Terror, but the guys responsible for Chillerama aren't as talented as John Landis and Joe Dante. At least, not yet.

First up in this collection of four short vignettes is Adam Rifkin's Wadzilla, a '50s monster movie spoof in which he stars as a guy who shoots a giant load of radioactive sperm, which grows to enormous size and terrorizes the city. See, it's funny because it's sperm. Actually, I'm being unfair, as Rifkin's installment is one of the better vignettes in the movie; he gets the tone right and is a talented enough filmmaker that he's able to put together a halfway decent approximation of those '50s B-movies. Unfortunately, we've seen those parodied about a thousand times (more of a guesstimate, really), so the only thing new that Wadzilla adds is a bunch of crassness. I'll give Rifkin credit for this: he does not hold back on that. There is a shot late in the piece that would have half the country calling for his head if they ever bothered to see a movie called Chillerama. Luckily, I think both the red states and Rifkin are safe from one another.

Up next is I Was a Teenage Werebear from Tim Sullivan, the guy who directed 2001 Maniacs and its sequel, 2001 Maniacs: Field of Screams. I know him best as the professional mentor/judge on season two of VH1's Scream Queens, on which he took over -- but was no substitute for -- James Gunn. On the basis of Werebear, he shouldn't be advising anyone when it comes to movies, even if it is just a dozen 22-year old girls looking to appear on a reality TV show. Werebear is a heartbreaking work of staggering incompetence: badly acted, poorly shot, unfunny and horribly overlong. Sullivan clearly wants to parody movies of the '50s and '60s, but he's not even sure what to reference -- it's Rebel Without a Cause meets a biker movie meets Beach Party meets a monster movie. Normally, I would applaud that kind of mashup, but Sullivan isn't able to make any of the elements work. I can't even give credit to the central premise, which uses the B-monster movie as a parable for homosexuality, because Todd Haynes already did it so much better in Poison, and that was 20 years ago. I Was a Teenage Werebear is a cancer from which Chillerama never recovers.

Adam Green's The Diary of Anne Frankenstein follows, and it has an uphill battle to climb, coming as it does after Sullivan's disaster. Though I suspect Green started with the title and worked backwards, his contribution, about Hitler (Joel David Moore) creating his own monster (named Meshugannah and played by Kane Hodder), is reasonably funny. Like too many of the vignettes in Chillerama, it's a one-joke short film, but Green is talented enough to make it work for the most part. It feels very small and static, like it was shot in the span of an afternoon (though Green does have one inspired visual joke about the limitations of the set), and seems to owe something to Rob Zombie's Werewolf Women of the S.S. trailer from Grindhouse. I'm sure it helps that I'm pulling for Green as a filmmaker, because I'm a fan of Frozen and can find a lot to like in his two Hatchet movies, even if they're not the "future of horror." Though all of his films have had a sense of humor thus far, Anne Frankenstein is his first overt attempt at comedy, and he does not embarrass himself.

Last, and perhaps most successful, is Joe "Wrong Turn 2" Lynch's contribution, Zom-B Movie, which also acts as the wraparound to all of Chillerama. It's basically just a zombie outbreak at a drive-in theater (which is showing all of the films seen in the anthology), with the added twist that in addition to wanting to eat human flesh, the zombies are incredibly horny and looking to fuck anyone and anything. It's very much in keeping with the shock-me shock-me juvenility of Chillerama, but Lynch has the advantage of a quick pace, a sense of scale and the opportunity to stage a lot of gore gags, all of which combine to make his entry the most entertaining in the movie by a long shot. There's an annoying tendency for all of the characters to speak in lines of dialogue from other movies, as though just referencing something is enough to engender our goodwill (making matters even worse is that every third or fourth time, a character will point out what the reference is from; was Lynch just worried we wouldn't get those specific lines? The only thing worse than being made to sit through something that insults your intelligence is when it has to stop to make sure it's insulted even further). Overall, though, it's bloody and lively and, at the very least, entertaining, which is more than can be said of some entries in Chillerama.

I really wanted to like Chillerama. I'm a fan of horror anthologies, and I like at least half of this group of filmmakers, Ultimately, though, it's too slapdash and uneven to recommend. Sullivan's segment sinks so low, while the remaining three shorts don't reach heights significant enough to get the taste out of your mouth. And if you're chuckling to yourself because you think that sounds like a dick joke, maybe Chillerama is for you after all.

Chillerama is currently playing in limited release and is available through Video On Demand. It will be released on DVD and Blu-ray on November 29th, 2011.
Posted by Patrick Bromley at 6:48 AM