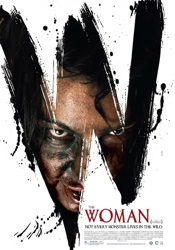 To see Lucky McKee's new movie, The Woman, is to be reminded of what slick, hollow trash most studio horror is these days.

Deadwood's Sean Bridgers stars as Chris Cleek, a small practice lawyer and powerful figure in his rural Northeastern town. He's also a slimy, raging douchebag. While out hunting one day, Cleek spies a feral woman (Pollyanna McIntosh in a great, fearless performance) washing herself in the creek and decides he's going to bring her home to domesticate her. So, he does exactly that: catches her in a net, chains her up in the shed and explains to his wife and kids that they're all going to have to pitch in and "help" this woman.

I won't say more, because part of the fun of a horror movie like The Woman is not knowing where it's going (that's true of all the best horror movies). I'm using the word "fun" rather liberally, of course, because fun isn't something The Woman has on its mind. The movie gathered a lot of buzz when it played at Sundance earlier this year, where an angry audience member stood up and threw a tantrum when the movie was over. Having now seen the movie, I don't understand what the guy was so worked up about; yes, the movie goes to some very dark places and can be tough going at times (particularly the third act), but it's not as though McKee is reveling in violence and gore for their own sake. There are ideas behind the images that McKee puts on screen, and as long as you understand that, even the hardest moments become easier to stomach. The only way I can imagine getting offended is if you take what's being said (about men in particular) personally. In that case, I'm glad you're seeing The Woman and it's bothering you. You need to be told what the movie is telling you.

The Woman is very much in keeping with the rest of McKee's filmography, beginning with May (still one of my favorite horror movies of the last decade). His movies are very much about the roles of women in the horror genre and in society at large; he's one of the few feminist voices in a genre that's known and (correctly) criticized for misogyny and the subjugation of women. I'm no big fan of The Woods, McKee's sophomore movie, but it certainly still fits within this framework; ditto for his Masters of Horror episode, Sick Girl. In three of the four movies mentioned, he's worked with Angela Bettis (she is not in The Woods), and I love their professional relationship -- they are the Scorsese and DeNiro of a very specific kind of horror movie, always bringing out the best in one another. Her work as Cleek's wife Belle in The Woman is excellent, and though it could seem similar to what she does in May on the surface, it is entirely different. It's a tough role to play, and Bettis is smart to keep so much of it hidden from us. In some ways, we sympathize with her character because she appears to be trapped in an impossible situation. Then McKee gives us a real impossible situation, and we recognize that Belle plays a part in everything that transpires. Is she a victim? Yes, but it's not quite that simple.

I realize that I'm making The Woman out to sound nuanced and subtle. It is not. McKee isn't interested in that. This is a loud, bloody statement, and that's going to bother some audience members. I don't mind a brash movie as long as what's hitting me over the head is worth being said or if it's done well, and both are true here. Plenty of people will be turned off by the long stretches of silence, or the numerous montages of characters trapped in similar (but altogether different) circumstances, or the almost wall-to-wall power pop soundtrack. Not me. The Woman is made up of big choices, and I happen to like all of them; the movie casts a hypnotic spell, ratcheting up tension as it builds towards its crazy, inevitable climax.

The Woman is currently playing in very limited release, so I urge you to see it in theaters if it's at all possible. It's the kind of movie that most people will be able to catch up with on DVD and Blu-ray, and I suspect even that won't happen for several years, at which point champions of the film will wonder why they never gave it a chance back when it came out (see: The Descent). It's not for everyone -- no horror movie is -- but any self-respecting genre fan owes it to him or herself to at least give it a chance. It's one of my favorite movies of the year.
Posted by Patrick Bromley at 6:37 AM