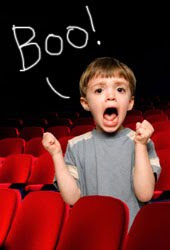 Here at F This Movie!, #ScaryMovieMonth is a sacred time. A time to be born, and a time to die; a time to plant, a time to reap that which is planted. A time for zombies. But, most importantly, it is a time to WATCH SCARY MOVIES! We're doing our part. Are you doing yours? To help get you in the mood (no filmo), here are some timeless(?) trailers from yesteryear's horror movies. Enjoy!

The only horror film to ever win an Academy Award for Best Picture, this movie, surprisingly, has VERY LITTLE to do with lambs. It came out on Valentine's Day, because romance. Also, manginas. For as awful as the narration is ("A killer is on the loose!"), can we all agree -- as a blog -- that we miss this guy's voice? So gravely. So 1991. I was 12 in 1991, and didn't see the movie until [probably?] a few years later. Still, as a teenager, I admit that I was confused by the movie's ad campaign. While the voiceover does state that Clarice goes to Hannibal Lecter for help ("In order to track him down, she'll have to match wits with the darkest of all minds!"), I originally thought that he was the movie's main villain. I mean, Buffalo Bill almost seems like an afterthought. And maybe that's the point? I dunno. I should probably watch it again, now that I'm wearing my film blogger pants (i.e., my pants are made of celluloid).

Full admission time! I've never seen Day of the Dead. JEEZ, DON'T BITE MY HEAD OFF (zombie joke)! Well, that's a half-truth. I saw a couple of scenes at Mike's house one October years ago. Something to do with an underground bunker? And how they are us (and how we are them)? Watching this trailer with "fresh eyes" is pretty interesting! I didn't know, for example, that half of the movie takes place in a movie theater. And, in that movie theater, a great deal of time is devoted to watching a zombie watch a movie (about zombies?) while voraciously eating popcorn! Very meta! Patrick calls this an "hilarious trailer that totally misrepresents the movie." I call it 80's gold!

That's it! Shut it down! This website is officially TURNED OFF! Why? Because I've done it -- I've finally done it! I've found the BEST trailer that's ever been featured ANYWHERE! Dario Argento's 1977 masterpiece(?) Suspiria! This preview has everything (in my best Stefon impression): ominous singing, skulls, pulsating flesh, a tormented woman crashing through plate-glass walls, bloody discharge, repetition of the word "Suspiria" ... EVERYTHING. Furthermore, it all takes place ... at the BALLET! Listen, dear reader, we barely know each other, yet I SO WISH that you were with me and Patrick when I first saw this movie in the early 2000s. It was one of our very early Scary Movie Nights (jealous?), and our lady friends fell asleep within the first few minutes (who can blame them?). The rest of the time, Patrick and I deliriously spoke in Italian/Transylvanian accents (our best Dario impersonations, obvi), referring to Cinematographer Vincent Gardoosh by his nickname, DP Vinnie Gardoosh. Sure, it sounds pretty dumb, lame and pathetic NOW, but, boy, you really had to be there! What fun! This trailer really brings back some memories. Oh, right ... and the movie? Kind of a piece of shit (IMHO). But this TRAILER! YES!
Posted by Patrick Bromley at 6:19 AM