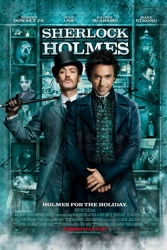 There are so many more fascinating things about the 2009 version of Sherlock Holmes than there are in the 2009 version of Sherlock Holmes, and that's backwards. Like the fact that it made over half a billion dollars worldwide, despite the fact that it's very boring. Or the fact that it somehow made Guy Ritchie -- who had previously been all but written off -- an A-list director. Or that it coasts on the not-insubstantial charm of Robert Downey Jr., who is the only thing worth seeing about the movie despite being kind of miscast, and who was written off himself at one point in time. The movie is a triumph of comeback potential. It should be so good. It is not.

It made a bunch of money, though, and people really like Robert Downey Jr. (he's maybe just behind Johnny Depp in the dreamboat-it's-ok-to-like-for-both-girls-and-guys department), so, of course, there's a sequel coming out this week. That's right: more Holmes for the Holidays. Excuse me while I barf on this pile of other barf.

On paper, I was excited about the movie back in December of 2009. Robert Downey Jr. is always interesting and fun, unless it's Due Date or The Soloist. Jude Law can be engaging. I like Guy Ritchie movies enough (even Revolver, which was a terrible mess, at least demonstrated his willingness to put his money where his mouth was when it came to his crazy Madonna bracelet religion). Mostly, though, I was excited at the prospect of a big-budget adaption of Sherlock Holmes, who had previously only appeared on screen in Without a Clue and Young Sherlock Holmes in my lifetime. Seeing it back in '09, I was struck at just how boring it ended up being. My feelings didn't change watching it a second time for this column; in fact, the movie's shortcomings only bothered me more this time around. Knowing that all the speed ramping and grey, dirty London streets weren't going to add up to anything made the whole experience even more deflating.

Here is the big problem with Sherlock Holmes, and the reason that the movie does not work: there is no mystery. This is a crippling flaw when making a movie based on the greatest mystery solver of all time. In fact, so much of the movie could have been awful, but if there was a really great mystery at the center, it would still have at least been worthwhile. And it's not as though there isn't a great deal of material from which to draw upon; four full-length Sherlock Holmes novels and FIFTY SIX short stories have been published, any of which could have been used as the inspiration for the 2009 screenplay. Instead, four different credited writers invented a story that (SPOILERS) depends almost wholly on supernatural nonsense rather than actual detective work. It's not a whodunit; the movie tells us right off the bat that Mark Strong's Lord Blackwood is the culprit. But when (SPOILERS) he "dies" a third of the way into the movie, we're left to wonder how he seems to be committing murders from beyond the grave. What we're doing then, is not seeing Holmes solve a mystery, but rather figure out a magic trick. Those questions are far less compelling, and the results far less satisfying.

And do not be fooled: it seems like this movie works, because it looks and feels like a movie and because Robert Downey Jr. and Jude Law will make you think that it's works. It does not. There is no movie here. There is a character, sort of, and a charming movie star, but no movie. There are a bunch of fistfights and false drama (at one point, we're made to believe that Watson has been killed, even though we know Watson will not be killed), strung together by some exposition that wouldn't make for a passable episode of Monk. The result is a classic character with all the blood drained out; in trying to make a movie that will appeal to everyone (and make no mistake, that's what's going on here), Ritchie and company have come up with a movie that ought to please no one.

The comeback of Guy Ritchie is perhaps the most interesting aspect of Sherlock Holmes. He came onto the scene primarily as a maker of post-Tarantino "bullet comedies" (in which someone has money and someone else wants that money and someone wants to kill someone and someone doesn't want to die and violence is used as a punchline) that were distinguished only because they were slightly grungier, scrappier and more British than those being made in the U.S. Lock, Stock and Two Smoking Barrels and Snatch are both entertaining enough, even if they are basically the same movie; same goes for Rock 'n Rolla, which was Ritchie's "comeback" movie after the disastrous one-two punch of Swept Away and the Kabbalah-inspired Revolver. Those two movies should have put Ritchie in movie jail forever (and further demonstrate that both Madonna and her religion will fuck you and your career long after she does),  but he somehow escaped and was given the keys to this enormous, expensive franchise. So what did he do with it? He made it look like pretty much every other Guy Ritchie movie -- lots of grime, lots of fistfights, lots of empty style.

A word about the fistfights, which seemed to be people's main objection to the movie when it was released. They are not what's wrong with Sherlock Holmes. Yes, I take issue with the speed ramping, and I take issue with Guy Ritchie turning a classic character into everything else he's ever directed, but technically Holmes did box, so it doesn't stray too far from canon. And, again, if he had a terrific mystery to solve, I could have forgiven twice as much boxing. He does not. Instead, it's symptomatic of trying to make Holmes "edgier" and more palatable to modern audiences, who might be bored just watching a genius figure out things that no other person could. Ignore the fact that it's one of the most iconic and beloved characters in all of literature. If he ain't hittin', I ain't watchin'.

Not long after Ritchie's film came out, the BBC began airing the Steven Moffat-written Sherlock, a modern-day telling of the detective's cases starring Benedict Cumberbatch as Holmes and Martin Freeman as his sidekick Watson. It's everything that Ritchie's movie should have been: smart, engaging, well-written and acted. It could never work as a Hollywood movie, because it's lacking the scale required of a holiday blockbuster (that's one thing that Ritchie's movie has, often to its detriment; every 15 minutes, it stops to have an action setpiece -- something that a Sherlock Holmes movie DOES NOT NEED), but it's great. If you felt let down by Sherlock Holmes, check out Sherlock (it's on Netflix Instant). Even if you liked Sherlock Holmes, you should still watch Sherlock.

I bring up the BBC series not just because it's better and more faithful to the source material (in spirit, anyway; it lacks the period trappings of the Hollywood version), but also for its characterization of Sherlock Holmes. I like Robert Downey Jr. a lot, because I am a person with eyes and a brain and he's good at making those things happy. I still don't know if he's the right guy to play Sherlock Holmes. He's a terrific actor and makes lots of interesting choices, but, again, because this is a big Hollywood movie, everyone seems afraid of making Holmes the difficult, condescending prick that he needs to be. Cumberbatch is great at this. Sherlock Holmes has one scene that hints at this aspect of the character: it's early on, when he's having dinner with Watson and his fiancee and incorrectly interprets her missing wedding band. She's hurt and insulted, throws wine in his face and leaves, hurt and insulted. Seconds later, we're treated to Downey shrugging it off and mugging as he takes bites of his dinner, making his adorable "ain't I a stinker?" face to make sure that we're all still on his side. He's been turned into the lovable rogue -- Jack Sparrow of Baker Street. He may have acted like a prick, but don't we still love him?

We don't need to love him. We need to respect him because he's brilliant and can do things that no other man can do. That's where we'll start to love him. Audiences love a guy who's good at his job.

A sequel, Sherlock Holmes: A Game of Shadows, is due out in just a few days, and it's already getting the "I guess it's kind of better than the first one" reviews that this kind of movie so often gets. The first one got a pass because people were charmed by Downey; in retrospect, they realized it wasn't very good. Now, the sequel is getting a pass and damned with the kind of faint praise the first movie received. I'll wait to see it (and, yes, I'm going to see it) to make my mind up, but I do not have high hopes. Perhaps the addition of Jared Harris as Moriarty will help matters (he was teased at the end of the first movie, because someone saw Batman Begins), giving Holmes a greater nemesis. I just want him to have a mystery to solve.