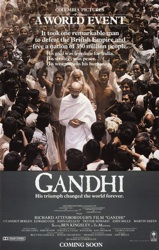 Listen: we here at F This Movie! have seen a lot of movies. Like, over 75 of them (at last count). But we can't see them all. These are the ones we've missed. We're not proud of this, but the first step is in admitting there's a problem.

Mike: Gandhi (1982) - It was 1982. I was four years old. I asked my parents if they’d take me to see Gandhi. Now, I’ve always loved movies. Since I was old enough to follow the images on screen, I’ve been watching and enjoying films. My parents were wonderful and exposed me to all kinds of movies as a kid, many I probably shouldn’t have been exposed to, and I am forever grateful that they did. Gandhi, however, seemed to be a little too much for my parents. They were absolutely confused as to why their four-year old son wanted to see Gandhi in the first place, or even knew about it. To be honest, I have no clue how I became aware of its existence. All I know is that I was dying to see it and my parents were not.

They talked it over and decided that I probably didn’t realize what I was asking for. They were convinced that once they got me into the theater with my popcorn and juice, I’d regret it before the popcorn cooled. They broke the news to me and it didn’t go well. I was crushed. Sure, I could go see E.T. with my sisters like a normal kid, but it was the bald head of Ben Kingsley that called to me. I asked again. They refused again. But this time, my parents made amends: they bought me a glass with Gandhi’s face on it. While it clearly wasn’t the same as seeing the movie, I was satisfied.

Almost thirty years later and I still haven’t seen Gandhi. It’s not that I don’t want to, it’s just that I refuse to let my parents off the hook. I guess one day I’ll have to show up to their house with the Gandhi DVD, a warm bag of popcorn, and some juice for my Gandhi glass.

Mark Ahn: To expose the FULL EXTENT of my cinematic philistinism, I'm giving you... a top 5 list of movies I want to watch but never have, because the reasons for why I haven't seen any one of these excellent movies (from what I've heard) is pretty much the same for all of them.

But before I do, I have to attempt to defend myself. Some of these movies are at or beyond the upper limit of my movie time range, which seems to be about 1960; there are probably less than ten movies I've seen from before then (all complaints can be emailed to fthismoviepodcast[at]gmail.com). Also. Actually? That's the only reason I can think of.

Erika: I claim to “love” movies. I claim to be “interested” in the history of film, and how movies are made, and blah blah snores. So then I have to ask myself, why have I not yet seen Gone With The Wind? It’s a Wonderful Life? Bridge On the River Kwai?

Once I was old enough (re: to get hired at Blockbuster Video [my dream job as a child] and rent many videos, blockbusters or not), I made it a point to see Ordinary People. And Terms of Endearment. And Tootsie. And Irreconcilable Differences. And The Godfather. And The Color Purple. And Purple Rain. And other movies about purple. See, these were the films my parents talked about when I was young – VERY young! Movies for which they hired a babysitter (not really so tough – my grandparents practically lived with us). But I remember. Movie-loving is in the blood. These were important movies at the time for my parents, and once I could, I knew I had to see them, too.

Still, I missed Casablanca. Out of Africa. The movie where Brando says, “I coulda been a contender.”(I know it’s On the Waterfront.) I know lines from these movies like everyone else does. Why haven’t I SEEN them?

Patrick: It's a tricky thing to talk about movies you've never seen, especially when people know that you are a "movie person" (the day I describe myself as a "movie person" is the day I start fixing myself Pop-Tarts in the bathtub). It doesn't matter that you've seen literally thousands of movies. People tend to fixate on the ONE movie they name that you haven't seen (i.e. "I can't believe you've never seen Breaking Away!"). And while I've spent the first few weeks of 2012 trying to fill in some of the obvious gaps in my movie watching, there are only so many hours in the day and only so many days in the very last year that Earth exists. NO MORE PULL-UPS!

I'm going to give my answers as a round of MOVIE SHAME (#movieshame), mostly because it's a game I made up for us to play on Facebook and Twitter and I want it to be a thing that catches on.

Come to think of it, I could go for that Pop-Tart right about now.

JB: Thanks to decades of avid movie going and my day gig teaching high school Film Studies in chilly northern Minnesota, I have now seen almost every classic film ever made. But a few forgotten gems have eluded me, and my must-see list includes mostly older, often lost, more esoteric films. Here are some intriguing little celluloid nuggets that -- as much as I am shamed to admit this -- I have never seen. The information I have been able to dig up on these films is nowhere near complete, but here goes.

Six Bullets in You (1932, Edgar Ullmer) This early Humphrey Bogart film features a supporting performance that has often been compared unfavorably to both Cary Grant in Manhattan Hi-Jinx (1930, Roy Del Ruth) and Gary Cooper in Sherriff Jim (1929, William Beaudine). Seen mostly in clip form in various documentaries about the early talkie era, it features the now-iconic “Baltimore pushcart” sequence. Reportedly, Six Bullets in You features no real gunplay, which led to disappointed audiences and the lowest reported gross of the 1930’s for a major studio film. 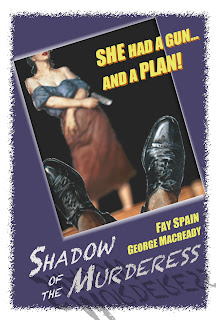 The Prince and the Stones (1952) The last and, by all accounts, finest of the Alexander Korda super productions, the film features a famous musical number (rumored to have cost upwards of a million dollars) wherein the title character Prince Armendesian (Sabu) flies with canaries and dies.

The Big Wank (1971, Jerry Lewis) Even more obscure than Lewis’s earlier The Day the Man Fell (1966), it was only released theatrically in South America. The Big Wank is often compared unfavorably to My Paisley President (1967, Blake Edwards) with its now-iconic supporting performance by Peter Sellers. According to some sources, The Big Wank features a sequence in which writer-director-producer-star Jerry Lewis chews on light bulbs and shamelessly flirts with a pretty meter maid (Suzanne Pleshette). Filmed partially in Chicago.

These films are hopelessly obscure; they are not even listed on IMDB, so do not bother looking them up. Still, my eyeballs are watering just thinking about seeing them! Seriously, F-Heads, if any of you know of how I can obtain a legal copy of any of these films, I will be forever in your debt.
Posted by Patrick Bromley at 6:37 AM