I'll Watch Anything: Patrick Watches Battle Beyond the Stars 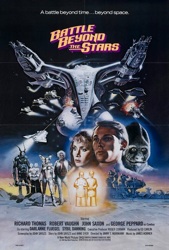 I'm so disappointed. I really wanted to love Battle Beyond the Stars, the 1980 sci-fi movie produced by Roger Corman and starring John Boy Walton, Hannibal Smith, Napoleon Solo and Sybil Danning's boobs. I love many of Corman's movies from his New World era. I love exploitation movies and silly, low budget sci-fi movies. I'm a big fan of much of the talent involved with the movie. So why didn't I like the movie more?

The suggestion that I watch Battle Beyond the Stars came from listener Joyce G., and I was happy to oblige for my first foray into "I'll Watch Anything" -- mostly because I already had every intention of watching the movie anyway. I've known of Battle Beyond the Stars from a very young age without ever having seen it, because my older brother loved it as a kid. And why wouldn't he? It has so many of the signifiers of a fun sci-fi movie: it has heroes and villains and lizard men and laser guns and space ships and Sybil Danning's insane cleavage. At one point, a guy gets stabbed and bleeds green blood, because fuck it why not? It came out on DVD for a short time in the early 2000s before quickly going out of print, and was unavailable for years until Shout! Factory acquired Corman's catalog and put the movie out on DVD and Blu-ray last year. And, yet, it wasn't until the movie showed up on Netflix Watch Instantly and Joyce emailed that I finally forced myself to see it. 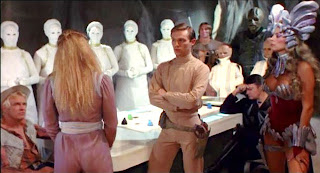 The specter of Star Wars looms large over Battle Beyond the Stars. Not because it's Corman's usual cheapie knock-off remake of that particular pop culture phenomenon -- that would actually be Star Crash with Carolyn Munroe -- but because it's only able to exist because of Star Wars. In a sense, it's still a cash-in, but the movie itself owes little to Lucas outside of the setting and general space opera feel. No, Battle Beyond the Stars is instead an outer space reworking of Akira Kurosawa's Seven Samurai (and, subsequently, The Magnificent Seven), with a screenplay by John Sayles.

Yes, John fucking Sayles wrote Battle Beyond the Stars. He was writing a number of exploitation movies back then, including both The Howling (also for New World) and Alligator. According to Howling director Joe Dante, Sayles was writing both of those scripts at the same time and would just switch out the paper in the typewriter depending on who was standing over his shoulder.

But it gets better, because also credited on Battle Beyond the Stars is James Horner, Academy Award winning composer for Titanic, who also wrote the classic scores for Star Trek II: The Wrath of Khan (one of my favorites), The Rocketeer, Aliens, Braveheart and dozens of others. His music for BBtS goes a long way towards making the movie seem better than it is; from the opening titles to the space "battle" sequences (really just shots of stationary models with some sound effects thrown in), Horner's music feels thrilling and iconic. It covers up just how inert most of the action is.

But it gets better, because also credited on Battle Beyond the Stars is James Cameron, who acted as art director charged with creating the movie's sets, props, ships and special effects. Cameron is obviously constrained by the movie's budget, but even as far back as 1980, one can see his obsessive attention to detail -- it's evident that he was going to do any given task to the absolute best of his abilities. So Battle Beyond the Stars looks cheap but never tacky, and has a great hand-made aesthetic that, even today, I prefer to the majority of dots-and-pixels CGI landscapes found in just about every blockbuster made today. What's maybe most interesting about Cameron's contributions to the movie is that it's one of the only times in his career where he's clearly chasing the work of someone else, essentially recreating Star Wars on a much lower budget. These days, he's so far out in front of everyone else -- at least, as far as visual effects are concerned -- that there's no one else even close to catching up.

Richard Thomas -- who makes Mark Hamill seem downright edgy -- stars as Shad of the planet of Akir, because calling it "Kurosawa" would have been just too on the nose. When the evil space asshole Sador (John Saxon) tells the people on planet Akir that he intends to destroy their planet in seven days if they do not willingly submit to him, one of the planet elders comes up with a plan to hire mercenaries to take Sador out, leaving it up to Shad to pilot a ship and assemble a team of protectors. Among them are Space Cowboy (George Peppard), a cowboy in space; Gelt (Robert Vaughn), as assassin looking for a place to hide; lizard man Cayman (Morgan Woodward), hoping to settle a score with Sador and warrior princess Saint-Exmin (Danning), seeking to prove herself in battle. 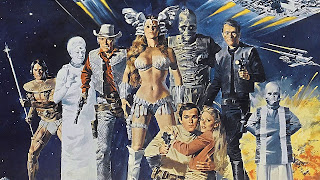 What's usually so great about Corman movies is the way that they strip down what's best about genre movies to their essential elements; they may be movies without much depth or subtext, but there's hardly any fat on them, either. They're made up of just the good parts. And, yet, because Star Wars and The Seven Samurai are already distilled down to the basics of story (in the best way possible), Battle Beyond the Stars feels the need to go the other way -- to begin adding on characters and subplots. It ends up having to service so many things that there's never a real throughline. Plus, say what you want about the silliness or childishness of names like "Luke Skywalker" and "Darth Vader," but those are memorable, iconic names. It's names like Shad and Sador and Gelt that turn people off of fantasy and science fiction, because they're too generic to tell apart and too nonsensical to remember.

But ultimately, I don't think it's Sayles' script that hobbles Battle Beyond the Stars. For that, I have to blame director Jimmy Murakami, who to date has made a few other films but none as well-known as this one. That's saying something. I know he's limited by the movie's low budget, but his problem seems to be one of tone. The movie is nowhere near as fun as it ought to be. I certainly had a good time with parts of it, but that's only because of what I brought to the movie -- I liked seeing the old-fashioned visual effects, and the way that Sayles transplants the structure of a classic like Seven Samurai into outer space. The "fun" is not inherent in the movie, and that's all wrong for something like this. It lumbers and drags, and its space battle scenes have no sense of lightness to them. Star Wars really captured that Saturday matinee feel; its low-budget counterpart, which has to replace spectacle with energy and ingenuity, should do that even more. Instead, it feels like a weak episode of Buck Rogers.

As much as I've bagged on Battle Beyond the Stars, I really can't complain. I'm happy to have seen it and actually got a lot out of it. There's a lot to like in the movie, even if it doesn't all work, and parts of it are genuinely enjoyable. Compare it to something like The Garbage Pail Kids Movie, which Doug had to watch for the very first "I'll Watch Anything," and I might as well have seen Charles Foster Kane take a DeLorean back in time to spend a weekend with Hooker Julia Roberts. My disappointment with Battle Beyond the Stars most likely stems from my own inflated expectations -- it's neither the movie I thought it was nor wanted it to be, though there flashes in which it comes close. Any movie in which George Peppard flat out says the words "I'm a space cowboy from the planet Earth!" can't be all bad. And have I mentioned Sybil Danning?

I will say this: if you've seen The Seven Samurai, you've got a pretty good idea of how the last half hour of Battle Beyond the Stars goes down. I have no idea how my brother handled that shit as a kid.

In the comments section, please continue to give us suggestions for future installments of "I'll Watch Anything." Thanks!
Posted by Patrick Bromley at 7:32 AM