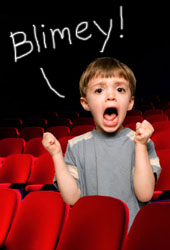 'Ello, govna'! Pip pip, cheerio! Put another shrimp on the barbie! If you can't tell, I'm in LONDON (jealous?). In between visits to Diagon Alley (GET IT?), the Iron Lady (a store for women seamstresses) and James Bond's crotch (I always enjoyed learning a new tongue), I tracked down these trailers for you Yanks across the pond. Please enjoy them with some bangers and mash. MIND THE GAP!

Trailer for a sequel to a movie I never saw. This stuff doesn't interest me (I never even got into the original Clash of the Titans from 1981 either, but I think Patrick was a fan?), although this preview does look ... spectacular? But, at the same time ... hollow? Everything onscreen is fake/digitally manufactured, and that takes away the film's gravitas. Also, SAM WORTHINGTON is a MOVIE STAR whether you LIKE IT OR NOT. I've never seen an actor shoved so hard down audiences' throats. And he's just so utterly plain and vanilla and uninteresting. Finally, is March 30 the new start to the summer movie season? Because that seems a bit early.

Mel Gibson should probably smoke more cigarettes in order to give his voice that deep, leathery timbre that works so well for narration. I'm kidding! Because MEL GIBSON ALREADY SMOKES ENOUGH VIRGINIA SLIMS TO KILL A PLOW HORSE! Also, he hates Jews. Why is he allowed to keep being a millionaire movie star again? OK, so Get the Gringo ... I'm not even sure what they're going for in the trailer, because NONE OF IT WORKS. Are American audiences really dying to see The Beaver in a Mexican prison?

Baha. Ba-HA. BAHAHAHA! Buried meets Cellular meets Phone Booth meets Saw meets DORFF (alternate poster tagline, thankyouverymuch). I'm not even saying this movie looks like the worst. I'm saying this TRAILER makes this movie look like the worst. I LOL'd (all over my pants) when Stephen Dorff pulled out the engagement ring. This just isn't your day, Stuart Sutcliffe! Director Gabe Torres previous projects were all TV documentaries, which explains this film's aesthetic. Also explains why I don't already watch Border Battles on the Outdoor Channel (it's apparently a thing!).