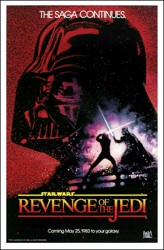 Sometimes it's good to be bad.

Mark Ahn: Darth Vader, Star Wars: A New Hope, The Empire Strikes Back, Return of the Jedi - Like lots of hyperimaginative kids growing up in the 80s, I loved Star Wars. My parents caught on, and there were quite a few birthdays that were marked by swag like toy lightsabers, AT-ATs, and Luke Skywalker lunchboxes.

My mom even got me Return of the Jedi bedsheets (here’s a link to see what it looks like), because nothing says devotion like sleeping on cartoon characters. What my parents did not understand was my complete, abject fear of Darth Vader, for all the normal reasons: the weird breathing, the superhuman strength, and the ruthless homicidal tendencies. If you clicked on the link, you can see that, along with Han, Luke, Chewie, and the gang, Darth Vader and some imperial guards (the guys in red) are on one side of the sheets.

I was so scared of Darth Vader that I refused to sleep on “his” side of the sheets, as if my leg touching Darth Vader meant inevitable, gruesome, sliced limb death. Like many victims of fear, I didn’t have the wherewithal to change the sheets or cover Darth Vader with a different blanket; I spent years of my childhood just curled up against the wall so Vader couldn’t get me. Even when I slid out of bed, I’d make sure not to touch him. All of this was perfectly logical behavior in dealing with a bloodthirsty space android; it’s indicative of the potency of the imagination that conjured up Star Wars in the first place, and the lasting impression those stories made on a whole bunch of us.

Erich: I can't think of many documentaries with truly great villains (except for Inside Job's "everybody on Wall Street"). Maybe that's why Billy Mitchell, nerdy nasty from The King of Kong stands out. The documentary about arcade players vying for Donkey Kong supremacy was a big hit, not only because so few films take video games seriously, but also because its hero and villain were as well-defined as any Summer blockbuster.

On the one side, perpetual nice guy turned DK contender Steve Wiebe. On the other, perpetual gaming champion turned hot sauce magnate Billy Mitchell. Even thou Seth Gordon's film runs dangerously close to feeling scripted instead of spontaneous, the clearly defined battle between Wiebe's schlubby David and Mitchell's American flag tie-wearing Goliath is gripping cinema. Is Mitchell a monster, or just another loud-mouthed geek deriving self-worth from the mastery of an unmarketable skill? I don't really care. I just want to see the Kill Screen.

Patrick: There have been so many great villains in the history of movies that it's tough to land on just one. Hans Gruber in Die Hard. Heath Ledger's Joker. The Wicked Witch of the West. The AIDS in Philadelphia. My choice is definitely not the "best" villain of all time, but he's one that doesn't get talked about enough: Xander Drax in The Phantom.

Yes, a character you've never heard of in a movie you forgot existed is one of the great movie villains of all time. The reason? Treat Williams, who turns what could have been a totally generic bad guy into a happy, smiling, winning dude who is utterly sunny and optimistic about his impending world domination. His enthusiastic "Wow!" when he gets his first demonstration of ultimate power, or his giddiness delivering lines like "Did you hear the exciting news? We're going to the Devil's Triangle!" are high points of the movie because they're completely sincere. He's not the regular crazy guy who's having fun because he loooves being evil (I'm looking at you, Jack-Nicholson's-terrible-Joker). He's having fun because he's getting to do a lot of really cool stuff -- travel to exotic locations, use magic, stab people in the eye with a microscope knife (that one makes sense if you see the movie). In his best moments, Williams plays Drax like a wide-eyed kid on Christmas morning, and it's a hoot. He's the most entertaining part of The Phantom, a way-underrated movie that's goofy and fun and so much better than it ever gets credit for being.

Alex: Sgt. Barnes, Platoon - The "crazed Vietnam veteran who has lost grip on reality" trope has been lampooned to such a degree that it's easy to forget that compelling, sincere performances of that ilk do exist. Tom Berenger, who has mostly made a career out reminding you of your cool uncle who likes history and baseball, is completely off the reservation as Barnes, and it is downright frightening. In a performance that had every chance to be cartoonish and insincere, Berenger roots Barnes in the type of reality that makes you wonder how a soldier gets driven to these limits. Plus, if you can make Willem Dafoe a level-headed patriot, you've really accomplished something.

Mike: In sticking with my role as the most predictable member of the FTM crew, I can’t think of a villain I enjoy more than Darth Vader. He’s a villain that has it all: cool costume, awesome weapon, evil intentions, and THE GREATEST VOICE IN THE HISTORY OF VOICES.

I have a favorite Darth Vader moment. When I tried to come up with a villain that wasn’t Darth Vader, I just keep coming back to one moment in Empire Strikes Back that sums up my love for the Dark Lord of the Sith. He and Luke square off on Bespin at the end of the movie. As they stand across from one another, Luke fires off his light saber first. It shoots out lightning quick. He’s impatient and cocky. Vader is next. His red light saber slooooooooowly jets out. He’s as cool as the other side of the pillow, and an absolute SPACE PIMP in that scene. It’s easily my favorite moment of the Star Wars saga. In that one second we realize how in control Vader is, how confident he is, how BAD ASS he is. There isn’t a doubt in Vader’s mind that Luke doesn’t pose a threat, therefore there’s now nothing but doubt in our minds about Luke’s chances.

I think the biggest sign to me that I’ll always love Darth Vader is the fact that the prequels haven’t ruined him for me. I still don’t make the connection in my head that Jake fucking Lloyd will grow up to be the baddest man in the galaxy. The Vader at the end of Revenge of the Sith is somehow not the same Vader that picks Luke apart in Empire. I’m not sure how or why I’m able to disconnect the two, but I’m grateful I can.

JB: This assignment has led to some soul-searching, and I have concluded that my life-long love of horror movies always saw me siding with the villains, so I do not really consider them villains at all but misunderstood protagonists. If pressed, I would offer the following:

“Sometimes I have wondered whether life wouldn't be much more amusing if we were all devils, with no nonsense about angels and being good.”

The Devil (voiced by Mercedes McCambridge), The Exorcist (1973)

“The sow is mine.” and
“Your mother is in here with us, Karras.”

“Now go to your closet and pray.”

Doug: It's no secret that It's a Wonderful Life is my favorite movie. This is due, in no small part, to Lionel Barrymore's pitch-perfect performance as the evil Mr. Potter. Barrymore plays the part with cold conviction and a strange familiarity. Is he acting? I assume so, but maybe he's a dick in real life, too. Explains why his grandniece Drew is such a jerk, no?

It's not so much that I'm afraid of Henry F. Potter (the richest man in town). In fact, I feel like I can "take him" (unless his opulent wheelchair has some weaponry I'm unaware of). It's that I feel like I've met him. And I HATE him. He's the everyboss -- the quintessential asshole in a power suit. A bloviating bully, he's oblivious to how his actions affect those around him. In fact, his apathy is probably his most startling characteristic. It's effortless and precise. But he's also a petty crook! A greedy, conniving thief. He pockets $8,000 he knows isn't his, which causes our hero to consider suicide. I mean, I really hate him!

Yes, there are other heavies out there that are more despicable: murderers, rapists ... kids who literally live in garbage pails. But for my money, it's Potter. I think I even hate him more because he GETS AWAY WITH HIS CRIME. It's 2012, and I'm still pissed off about it. I can only imagine how audiences in 1946 felt.

In 1986, SNL responded to this with one of my favorite sketches, the "Lost Ending to It's a Wonderful Life." Click here to read Patrick's write-up on the sketch, and then click here to watch the video (sorry for the ads. Hulu is on par with Mr. Potter for being the WORST).