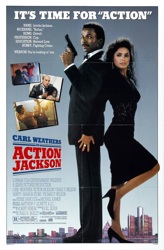 This one deserves its own column.

If (WHEN) aliens ever land on Earth and ask to see mankind's single strongest representation of the '80s action movie, we will not show them Die Hard or Commando or Rambo: First Blood Part II. We will show them Action Jackson. It's not the best action movie of that decade, but it does take every single thing that defined the genre during that time and multiply it times 10: ridiculous, borderline mythic hero -- a cop who plays by his own rules and reports to an angry black captain; a non-stop barrage of one-liners, ranging from the nonsensical ("Chill out!") to the sublime ("You nearly ripped that boy's arm out!" Jackson: "So? He had a spare."); big, practical stunts; over-the-top violence; Joel Silver producing; Michael Kamen doing music; gratuitous nudity. Everything about the film is so BIG that it nearly crosses over into parody, but it's (mostly) meant to be taken seriously. If you're an '80s action junkie, Action Jackson is like mainlining some shit right into your neck.

Don't believe me that this is the definitive '80s action movie? Fine. Here goes: It opens with Ed O'Ross (Red Heat's Viktor Rosta) and Mary Ellen Trainor (the former Mrs. Robert Zemeckis and star of every movie made in the '80s, including [but not limited to] Die Hard, The Monster Squad, Romancing the Stone and all of the Lethal Weapon movies) working on something in a high rise. I don't know what. It doesn't matter. What matters is that a bunch of guys in black masks smash through the windows and kill Trainor by tossing her through glass. They then pin O'Ross' hand to a wall using a butterfly knife (don't worry; the thrower does all the cool tricks with it first); after he removes it in graphic detail, he's blown through the window with some super-powered gun, at which point he falls fifty stories while TOTALLY ON FIRE THE WHOLE TIME and smashes on the pavement below, horrifying some innocent bystanders just trying to have dinner.

This is all within the first five minutes.

Every name in the movie is a signifier of both the genre and the decade. DO YOU UNDERSTAND THE WORDS THAT ARE COMING OUT OF MY MOUTH? Even the actors not listed in the opening credits are a who's-who of familiar action movie faces: Dennis Hayden (the Huey Lewis-looking terrorist posing as the security guy in Die Hard), Nicholas Worth (Darkman), Branscombe Richmond (The Taking of Beverly Hills). Sonny Landham (Predator, 48 Hrs.) shows up. And, of course, there's motherfuckin' Al Leong: 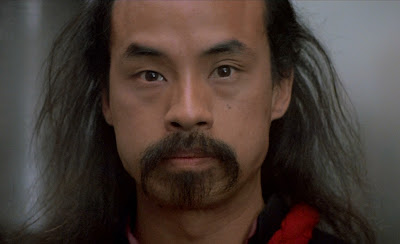 IS THERE AN ACTION MOVIE HE IS NOT IN??
The answer is no.
Lethal Weapon. Rapid Fire. Big Trouble in Little China. Death Warrant. The Perfect Weapon. I Come in Peace. Army of One. Double Dragon. Escape from L.A. The Scorpion King. The Replacement Killers. The list goes on.

We know the movie takes place in Detroit, because there are lots of shots of cars being made (yet another signifier that this is 1988; the auto industry has since abandoned Michigan) and road signs leading to Detroit. Two cops (one of them is Biff Tannen) pick up a kid for purse snatching and are trying to scare him by telling poorly-written, larger-than-life stories of Sgt. Jericho "Action" Jackson, the meanest, baddest cop in the city.

"Some say he didn't even have a mother," Biff Tannen says. "That some researchers at NASA created him to be the first man to walk on the moon without a space suit. Others say his mother was molested by Bigfoot, and Jackson is their mutant offspring."
Also,
"Jackson is so vicious we won't even let him have a gun."
and
"Sometimes he gets so riled up you got to use one of those Wild Kingdom tranquilizer darts just to keep him in his chair."

Once inside the station, the kid, properly terrified, kicks Biff in the balls and escapes, running directly into a desk. The nameplate reads "Sgt. Jackson." Low angle reveal of Carl Weathers, who stands up, says "Mellow out" and the kid faints. I don't even get what that means.

This is all within the first 10 minutes.

I'm not going to continue recounting the movie beat for beat (even though I totally could); I just want to give a sense of just how dense Action Jackson is with all the things that we fans of the genre love. The rest of the movie deals with Jackson's efforts to take down an evil auto exec named Peter Dellaplane, who is killing off union members who stand in the way of his rise to power. After he's framed for murder, Jackson teams up with Dellaplane's mistress (Vanity), a heroin-addicted singer, and the two work to crack the case and restore Jackson's reputation back to "action" status. 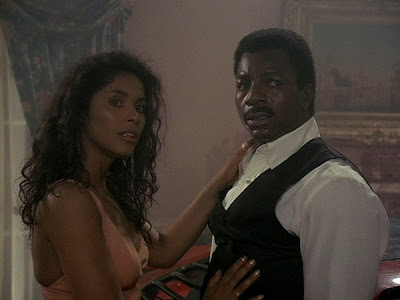 His title is very important to him. It's understandable, because it's cool and it rhymes. Craig Nelson, who plays the movie's villain (his hair is even dyed blonde, because blonde hair is more evil) tries to get under Jackson's skin when they first meet by getting his name wrong: "Jackson, right? There's a nickname associated with it...Excitement...Enthusiasm...Esprit du Corps?" This is a terrible burn, but it makes me furious that the movie was not called Esprit du Corps Jackson. Maybe that's the title in Europe.

I like that the movie is set in Detroit, partly because not too many action movies are, but also because so much of the city's makeup actually informs the story. It's all about the auto industry and unions. The cast is more diverse than in most action movies, including African-American male and female leads. Race isn't really an issue in the movie, though, the way it was in something like Passenger 57 (except for the scene in which Nelson explains his evil plan, which includes framing Jackson for more crimes by dressing up another black guy to look like him because, in Dellaplane's words, "You all look alike anyway." That's about as racist as it gets). Despite a largely black cast and a well-suited title, it actually owes very little to the blaxpoitation movement -- even though, had it been made 10 years earlier, I'm positive that Jackson would have been played by Fred Williamson. He's perfect for the part.

In its own way, Action Jackson is actually kind of progressive in that it represents an honest effort to create a black action hero while remaining mostly colorblind -- the movie was made to appeal to everyone, not just black audiences. That the character never really caught on isn't really the fault of the movie; more likely, it was the result of an overcrowded marketplace and the fact that no one was apparently interested in Carl Weathers as a movie star. He couldn't be Rambo. He could only be Rambo's best friend, Apollo Creed. And, so, Action Jackson joins characters like Remo Williams and Ford Fairlane -- guys that should have had their own franchises but failed to get that first movie off the ground. 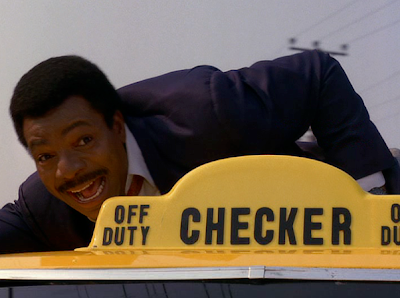 This was the first movie directed by Craig R. Baxley, a former stunt coordinator and 2nd unit director (he shot 2nd unit on Predator) who is also part of a long tradition of action movie directors who uses his middle initial (see also: Sidney J. Furie, Dwight H. Little, Steven E. de Souza, Mark L. Lester). His resume means he's pretty good at staging action: he knows how to set up cool practical stunts and where to put the camera to get the best possible angle. There's a generation being raised on Paul Greengrass and Michael Bay that would watch a Baxley set piece and call it clunky, which is completely depressing. Action filmmaking has been a lost art for several years, and only recently has there been some push back against the terrible modern style.

Baxley went on to direct two more movies, I Come in Peace (aka Dark Angel) and Stone Cold, both action classics in their own right, before suffering the fate of so many other genre directors and migrating to the DTV market. Nowadays, he directs TV pretty much exclusively, and that sucks -- his clean, straightforward style is sorely missed in the frenetic, handheld, over-edited era of modern action movies. Just look at The Expendables, a movie that was supposed to pay tribute to the classic action movies of the '80s but pretty much only gets the casting right. Baxley would have directed the shit out of that movie, and could have fixed at least some of its problems.

Action Jackson is still his best work. It's the action movie that separates the men from the boys, offering so much for fans of the genre and literally nothing for anyone else. If you're just getting into '80s action, this is not where you start. It's where you finish. It is the logical progression of the entire movement, both ridiculous and ridiculously entertaining.

I'll leave you with this, easily the Action Jacksoniest scene in Action Jackson. It's filled with shirtlessness, fireballs, explosions and, best of all, every line of dialogue is the kind of stupid action movie one-liner that would make McBain proud.

I mean, he says "Chill out!" and then sets someone on fire? Hopefully, our future alien overlords will be able to explain that one to me.

Got a movie you'd like to see included in a future installment of Heavy Action? Let us know in the comments below.
Posted by Patrick Bromley at 8:10 AM