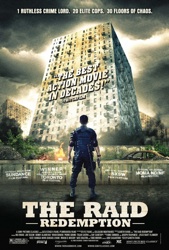 The Raid: Redemption is being called one of the best action movies of all time. It is not. This does not mean it is not awesome. It is.

In last week's Heavy Action column, I championed Craig R. Baxley's Action Jackson by arguing that it's the '80s action movie that separates the men from the boys. I meant it, too; if you're someone who claims to love '80s action, you will be tested by Action Jackson.

Well, it's 2012 and Welsh filmmaker Gareth Evans has made an Indonesian movie called The Raid: Redemption (Serbuan maut) that takes away the '80s element but also plays like a test for action movie fans. You say you like action movies? The film asks. Prove it, pussy. 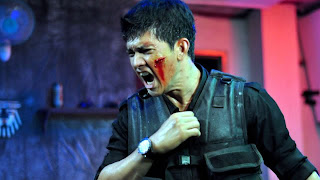 The Raid: Redemption is a terrible title, but it's not Evans' fault; for the longest time, the movie was just called The Raid, and was promoted as such after playing at last year's Toronto International Film Festival and blowing the fucking roof off the place. Then they found out that another movie already owned the rights to the title The Raid, so, rather than having to come up with a totally new and unrecognizable title, they just added Redemption to it even though "redemption" doesn't really factor into the plot all that much. It's also become one of those movies like Scott Pilgrim vs. the World, Attack the Block and, most recently, The Cabin in the Woods that the internet is freaking out about and keeps giving slobbering rave reviews; whether or not this translates to box office remains to be seen (though it hasn't really worked in the past). The movie does keep expanding to more theaters, so that's a good sign.

The story is simple. In fact, it's more of a premise than a story: an elite squad of police officers invades an apartment complex in Jakarta to take down the city's most notorious crime lord. Trouble is, almost every apartment in the building is populated by criminals, thugs and murderers, meaning the police officers -- namely, Sgt. Rama (Iko Uwais), husband and new father -- have to fight their way to the top. Even worse? They have to fight their way back out.

That's it. 20 cops go into a building and take on hundreds of killers, fighting their way both up and down the building. The rest is pure brutality and bloodshed. It's awesome. But it's not necessarily one of the best action movies of all time.

Now, saying that The Raid is not one of the "best" action movies of all time, like any statement about movies, is entirely subjective and depends wholly on what you want out of an action movie. If all you want to see is insane fight choreography expertly executed, this is your movie.  There's no denying that it has some of the best action ever filmed. Where it falls short a little is as an actual movie, if only because of the thinness of the characters  (one guy has a wife and child; that's it for character development) and a lack of overall stakes (one guy has a wife and child; that's it for stakes). None of this is unintentional on the part of the filmmakers. Simplicity is key to the movie. It knows exactly what it wants to do and goes about it with a focus and intensity unmatched by just about anything that's come out in the last couple of years. But it really can't be compared to a Die Hard or a Terminator or even a Speed -- movies with terrific action (though it's of another sort) in addition to having good scripts with stories and character development and things like that.

What it does better than any action movie in recent history is show action. There is no quick cutting or restless, hand-held camerawork used to fake energy that otherwise isn't there. No CGI enhancements. There don't even appear to be stuntmen -- just real actors, really fighting in essentially real time. That is the movie's most incredible special effect: the amazing physical ability on display by the cast, who are capable of the most incredible physical feats and do the coolest shit on film in a long, long time. I haven't seen Merantau, Gareth Evans' first movie, so I was totally unaware of star Iko Uwais and what an incredible badass he is. He is amazing (though the movie's pint-size villain, Yaya Ruhian, is possibly even more impressive). In his first major fight scene in the movie, he takes on an entire hallway of guys in a way that rivals Choi Min-sik's one-take fight in Oldboy. And just when you think that's the movie's big set piece (the way it is in Oldboy), it just keeps on topping itself. Over and over. With every new action scene, you're positive it can't go any further, and every single time you are wrong. The final fight is one of the most punishing, amazing action scenes ever filmed. The movie is worth seeing for that scene alone. 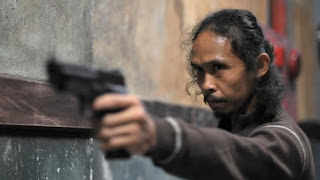 Watching The Raid: Redemption, I was reminded of the first time I saw Peter Jackson's Dead Alive, a movie I rented on a Saturday night in high school on the basis of the crazy cover box. By the time that movie's hero picked up a lawn mower and started cutting hundreds of zombies down to paste, my jaw was on the floor. HOW COULD THIS EVER BE TOPPED? Nearly 20 years later, I still don't think it has been; plenty of other horror movies have tried, but most of those push the gritty, "extreme" horror angle instead of attempting to match the sheer energy and insanity of Jackson's movie. It threw down the gauntlet, all but daring anyone else to go further.

The Raid: Redemption is the action movie equivalent of that.

Where can action movies go from here? It's hard to imagine a movie ever achieving such speed and brutality in its martial arts sequences. It's hard to imagine more punishing violence. It's hard to imagine better fight choreography or more confident direction -- the movie is a master's class on how to shoot action with a sense of pacing and geography. Also, the movie was made for just over $1 million, which wouldn't cover a week's catering budget on Michael Bay's latest piece of overdirected shit.

So, yes, The Raid: Redemption is fucking insane and is definitely a new classic of the genre. It has  better action than a big Hollywood production like Mission Impossible: Ghost Protocol (out on DVD and Blu-ray this week!), even if MI:GP is better at being an actual movie.

We're lucky we live in a world with both.

Got a movie you'd like to see included in a future installment of Heavy Action? Let us know in the comments below.
Posted by Patrick Bromley at 8:37 AM